Kevin Whitaker never met a school assignment he couldn’t turn into something baseball-related. His research on the MLB Draft was published at the 2013 Sloan Sports Analytics Conference, and he writes about college basketball at Beanpot Hoops. Follow him on Twitter at @whitakk.

It’s no secret that this year’s Hall of Fame ballot features a historically large pool of qualified candidates. Among the nominees are the all-time home runs leader, a 3,000-hit second baseman, and a durable slugger with an MVP award—and those are just the players whose names begin with “B.”

In part, the current backlog reflects the slow pace at which voters have inducted Hall of Famers over the past few seasons. But a bigger factor is that more qualified players have become eligible. In the last five elections, 18 players debuted on the ballot with JAWS scores of at least 90 percent of their position’s Hall of Fame standard. In the entire decade before that, only 15 such players entered the ballot.

What do these new candidates have in common? All 18 were active for the entirety of 1993-2002, and all but Roger Clemens and Barry Larkin had the majority of their peak seasons in that decade. By JAWS and other advanced metrics, the best players of the late 1990s simply have better Hall of Fame cases than did the best players of the previous era.

Baseball changed in several ways during the 1990s, providing a few possible causes of the current wave of Hall of Fame candidates. The biggest on-field change was a dramatic increase in run environment — but JAWS is based on WAR or WARP, which are context-neutral stats. The ’90s were also, famously, the “steroid era.” But we have very little understanding of how steroids affect baseball performance, and many extreme performances came from Greg Maddux, Pedro Martinez, Ken Griffey Jr. and others who are widely believed to be “clean,” even at a time when players are tied to PEDs with very little evidence.

Another element of 1990s baseball—one that I believe had a more concrete effect on the era’s star performers—was expansion. Between 1992 and 1998, MLB grew from 26 to 30 teams, adding 100 new roster spots to the league. Players who would have been minor leaguers at the beginning of the decade became major leaguers after expansion, and former bench players were forced into full-time roles. As a result, players who were already everyday starters posted better raw statistics, because hitters got to face weaker overall pitching (and vice versa). Likewise, their context-adjusted numbers also improved, because the best hitters were being compared to a weaker aggregate group of position players (and ditto for pitchers).

Over a long period of time, this effect is washed out by MLB’s increasing talent pool, which is constantly expanding due to both domestic population growth and the internationalization of the game. But in the years immediately following expansion, history has shown that stars benefit from weaker competition: 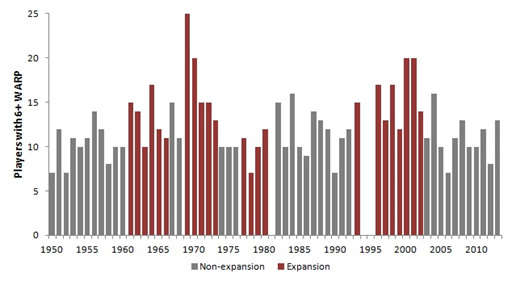 Since 1950, there have been seven seasons in which 17 or more players finished with at least six WARP. All seven came within five years after an expansion, even though fewer than half of all seasons since 1950 fit that condition. Excluding strike-shortened seasons of 1981, 1994, and 1995, an average of 15.5 players have posted at least six WARP in the five years after expansion, compared to 11.0 players in all other seasons.

When comparing performances from different eras, we don’t just compare each player’s raw stats, because we understand that those numbers come from different environments. Good analysis instead uses context-neutral statistics, comparing performance to that of an average or replacement-level player. But when “average” or “replacement level” changes—as in the case of expansion eras—should we not also consider that factor?

To estimate the impact of expansion on stars’ statistics, we can compare the performance of the top players before and after expansion. In post-expansion seasons, the top 10 players in baseball have had an average WARP of 7.8; in all other years, their average is 7.4, a statistically significant difference. Using different cutoffs (eg., top five or top 20) yields similar estimates of about .4 wins per season.

For the stars of the late 1990s, who played 10 seasons (including most of their peaks) in post-expansion years, that translates to about 3-4 points of JAWS earned just by playing against weaker competition. That’s certainly not enough to keep Greg Maddux out of Cooperstown. But if we adjust our Hall of Fame standards for the impact of expansion, the borderline candidates of this era—such as Larry Walker, Edgar Martinez, or Rafael Palmeiro—won’t seem quite as deserving as they do today.

You need to be logged in to comment. Login or Subscribe
houstonuser
How would this thinking alter Hall of Fame perceptions of players from the first expansion era of 1962-1977? The number of teams grew by 33% from 16 to 24 teams in this time. Also, Major League players before 1947 did not play against Black players. Even after '47, some teams did not integrate until the late 50's. This exclusion of top talent was a dilution of the talent pool likely more impactful than that of expansion Why should any steroid free player who thrived in the 90's be punished for simply being of his times? Players before 1947 always had the option of calling for integration. Very few did though. Any Expansion-era contributions inflated by a weaker talent pool seem benign in this context. Martinez for the Hall!
Reply to houstonuser
tnt9357
Additionally, as Dave Cameron points out on Fangraphs, the percentage of players from those previous expansion eras that are enshrined in the HOF remain stable (between 1 and 2 percent), while the current cohort of nominees (born in the '60s) is well below 1 percent. Why did previous beneficiaries of expansion not get similarly penalized?

I suspect that the previous numbers of candidates could be accommodated with a ten player ballot, even with a 150% expansion in total number of players and so, in a sense, that norm parallels what Kevin Goldstein (RIP) calls "being famous": There's been an absolute number of players that fit the notion of "Hall Of Famer", rather than a number proportional to the number of players with a lengthy career. The discussions we're having now may cause us to change that notion (which has really been building up for the last decade or so, with players from the '80s getting the shaft, possibly the flip side of this expansion argument, given the stable number of teams for 16 years)
Reply to tnt9357
JimmyJack
I saw Edgar's entire career. He destroyed all pitches and pitchers. Even with his late start (bad team decision) & injury moving him to DH (good team decision), he was as devastating a hitter as MLB has ever had!
Reply to JimmyJack
delatopia
The number of teams actually grew by 50%, not 33%. Common mistake though.
Reply to delatopia
Tarakas
Nice job.
Reply to Tarakas
alangreene
Great article.
Reply to alangreene
Shankly
Very thought provoking.
Reply to Shankly
MikePemulis
I agree with houstonuser's point if not his conclusion. The '50s is probably a drastically underrepresented era in baseball for both black and white players as a result of the essential 'doubling' of the talent pool. Has anyone done an article related to this? Larry Walker for president (of Canada).
Reply to MikePemulis
WaldoInSC
...in Canada, president's a relatively useless job, like a LOOGY.
Reply to WaldoInSC
tnt9357
Mayor of Toronto, then? (What, too soon?)
Reply to tnt9357
juiced
Ridiculous premise, as the 1990s were one of the toughest competitive eras in MLB history given the truly international pool of talent that teams drew upon the staff their rosters. Far more significant than a few extra teams than prior eras. If you want to talk about a weaker, diluted time, choose all eras prior to full racial integration which only began to occur in the late 40s. Not playing against the likes of Satchell Paige, Josh Gibson, Dominicans, South Americans does FAR more to dilute the stats of the likes of Ruth and Matthewson than expansion does for the likes of Larry Walker
Reply to juiced
pft1957
While the number of teams did increase about 15% it was pretty much filled by talented Latinos who almost doubled their numbers from about 12% in the 80s into the 20's in the 90's, not to mention PED's and weight training enhancing that talent.

We should probably be more concerned with the shrinking of the talent pool in the 21st century relative to the 90's with the number of African Americans dropping from 16% African Americans in to 7-8% today. It has been made up by a mix of whites, latinos and asians but given blacks made up some of the better hitters in the modern era since integration their loss has probably not be replaced to the same degree. Perhaps it is responsible in part for the drop in offense in recent years, although that is probably due to the larger strike zone.

The most significant story of the last 20 years IMO has been the increase in HR's and BABIP and the tremendous rise in the K rate. I doubt this is all due or even mainly due to expansion. Park, ball, strike zone, PEDs, weight training and bats all played a part.

This is the biggest challenge for comparisons between eras, not to mention the smaller gap between the best players and league average, which suggest the talent pool is at historically high levels, even today.
Reply to pft1957
drawbb
I'm not sure if there HAS been an actual significant drop in the number of black players.

When you consider that the proportion of players from Latin America and Asia has exploded in recent decades, by definition that has to come at the expense of American players. My guess is that ALL of the American demographic groups have declined, not just the black players. Mathematically it'd be pretty difficult for that not to be the case.

The key would be whether one American segment bore a much sharper rate of decline than the other. I'd like to see data on that if someone has it.
Reply to drawbb
NathanAderhold
Really interesting stuff, Kevin. Thanks for sharing.
Reply to NathanAderhold