I said on Effectively Wild on Wednesday that I liked the moves Rick Hahn had made since midseason—trading for Avisail Garcia, Adam Eaton, and Matt Davidson, signing Felipe Paulino and Ronald Belisario, and so on. That list of sensible acquisitions got a little longer on Thursday, when the White Sox signed Scott Downs. In Belisario and now Downs, Hahn has added two of the top six relievers in groundball rate last season (min. 40 IP), without guaranteeing either a second year or more than $4 million for the first. (Downs’ vesting option includes a $250K buyout.)

The lefty made a late transition to the bullpen; through his age-30 season, he owned a 4.80 ERA in 334 frames split between the rotation and relief, with a 5.35 ERA in 50 starts. But since 2007, his first season spent exclusively in the pen, he’s been one of baseball’s most reliable relievers, posting a 2.33 ERA in 447 games. As a left-handed, soft-tossing sinkerballer, he’s not the type to get saves, but only two relievers have pitched at least 40 innings in each of the last six seasons without once having an ERA higher than 3.15: Downs, and Jonathan Papelbon.

Downs is death on lefties, whom he’s held to a .209 TAv over the past seven seasons. From 2007-11, he was tough on right-handers, too, limiting them to a .234/.300/.326 line. Over the past two seasons, though, right-handers have hit him harder, perhaps because he’s all but abandoned his best weapons against them, shelving his four-seamer and slider and reducing his curveball usage in favor of an ever-rising sinker rate. 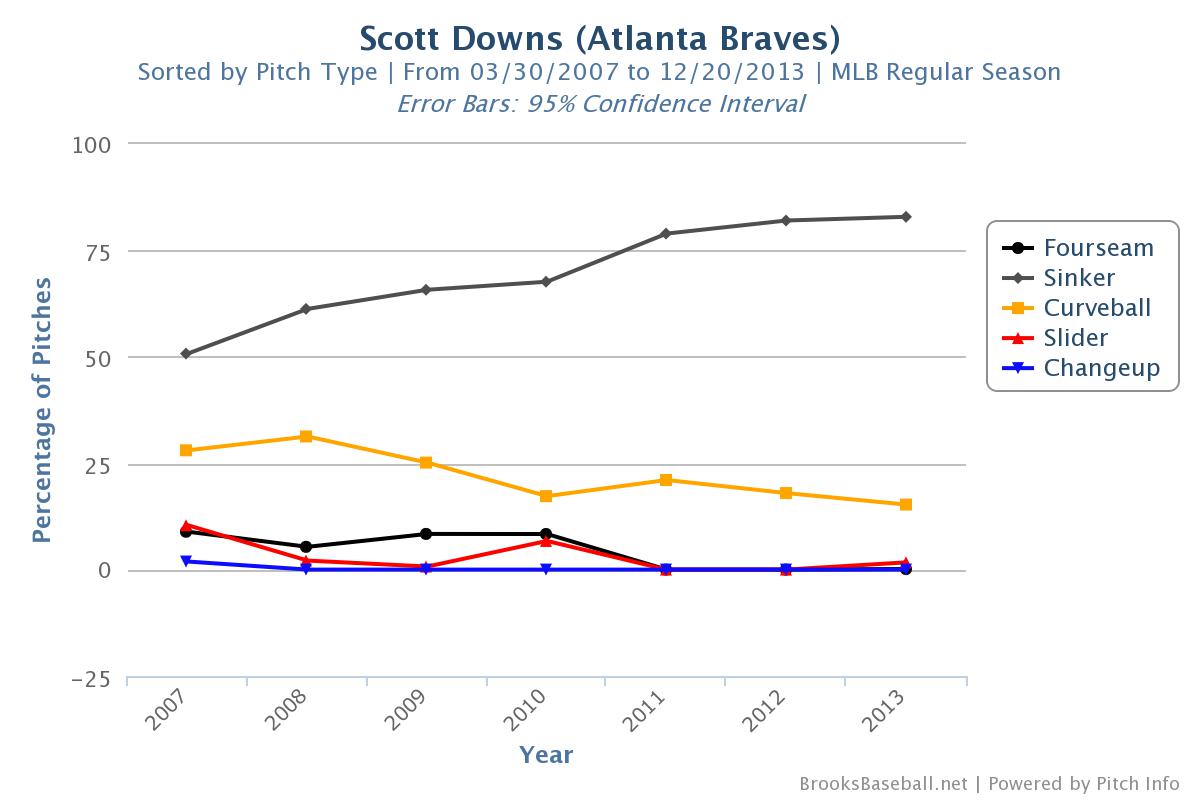 Downs’ workload has lightened as he’s aged, and he’s lost a little velocity, but he has been healthy. As I wrote when the Braves acquired him last July,

Aside from a shoulder strain that cost him 20 games [in 2012], his DL entries look like flukes: a 2009 sprained toe suffered as he pushed out of the batter’s box in his only plate appearance since his days as an NL starter, a 2011 gastrointestinal virus, and a fractured toe that he stubbed while playing with his kids in casual footwear. (“We’ve all worn flip-flops,” Mike Scioscia said at the time, “and we know things can happen.”)

Downs probably shouldn’t face as many opposite-handed hitters as he did from 2012-13, but he’s not a bad bet against a right-handed groundball hitter with a man on first base. After trading Matt Thornton, the Sox lacked a lefty other than Charles Leesman (a recently converted starter/groundball guy who’s hoping to have a Downs-like second life as a reliever), so Downs checks that obligatory box. He also fits the batted-ball mold that the Sox seem to be targeting. All seven of the top arms on Chicago’s bullpen depth chart—Belisario, Downs, Leesman, Daniel Webb, Donnie Veal, Matt Lindstrom, and Nate Jones, as well as Jake Petricka—had groundball rates north of 50 percent last season. The Sox have a strong defensive middle infield, but they’re only okay at the corners, so it’s not as if they’re going to gobble up those grounders at an extraordinary rate. Still, it can’t be a bad idea to keep the ball out of the air in the best non-Coors park in which to hit homers.

There’s nothing brilliant or Moneyball about paying $4 million for a soon-to-be-38-year-old setup man, but signing the consistent, durable Downs to a short-term deal was a safe solution for the Sox. Much safer than, say, paying many more millions to bring back Boone Logan.

Terry Ryan's hunt for a veteran catcher has persisted throughout the winter. He expressed interest in A.J. Pierzynski and Jarrod Saltalamacchia, but they expressed more interest in joining the Red Sox and Marlins, respectively. By the time those decisions were made, the once-flooded catching market had dried up, leaving Ryan to pick among vanilla veterans. In the end, they chose Suzuki, who will make most of the starts until Josmil Pinto takes over.

Suzuki, now 30, has spent the past two seasons bouncing between the Athletics and Nationals as part of their joint-custody agreement. Alas, the cross-country flights have impacted Suzuki's bat to the point where he's hit .234/.282/.332 along the way. Though he receives high marks for his blocking and leadership abilities, he's not a great defender, rating poorly as a receiver. Overall, he has a limited ability to add value. But that's okay, since all the Twins needed was an upgrade over Eric Fryer and Chris Herrmann. Suzuki gives them that, even if he isn't sexy. —R.J. Anderson