Of Andrew Friedman's many baseball-related fears, stocking a rotation with free agents tops the list. (He once stated the Rays would be doomed if it came to that.) The implication is clear: the costs are too high and the yields too low for a revenue-challenged franchise to embrace. The solution is clear, too: small-market teams must foster their starters through the draft and trades to sustain success.

Terry Ryan knows Friedman's plight as well as anyone. During the height of his success—we'll say the stretch from 2001 to 2004, the only time in franchise history the Twins won 85 or more games four years in a row—Ryan had nine different pitchers start 15 or more games in a season. One of the nine signed as a free agent (Kenny Rogers) on a one-year deal, and two others were veterans acquired through trades (Rick Reed and Terry Mulholland). Otherwise, Ryan relied on six pitchers who had one career big-league start among them before joining the organization (Kyle Lohse, Joe Mays, Eric Milton, Brad Radke, Johan Santana, and Carlos Silva).

This winter, Ryan is living on the other side of the fence. His organization's failure to develop their own has shepherded him to becoming the league's most-active buyer on the free-agent starter market. Ryan had already pounced on Ricky Nolasco and Phil Hughes by the time Pelfrey's return was reported, pushing his 2014 commitments to starters this winter to $25 million—for a trio that averaged 4.93 runs per nine innings in 2013. Should Kevin Correia and his $5.5 million salary also make the rotation, the Twins would be in line to pay four starters acquired as free agents some $30 million next season—and they might not be done shopping.

The scary thing is the Twins haven't shopped at the brand-name stores. Instead Ryan has paid market prices for back-end types. Pelfrey fits the bill in both regards.

The former top prospect underachieved again in 2013, though there were some differences from the past. Pelfrey began using his sinker more and more as the season progressed, and embraced a windup as a means to stay on top of the ball. Yet, despite the increased emphasis on killing worms, he posted a career-low groundball rate—likely due to imprecise location. Perhaps Pelfrey will be aided by getting further away from elbow surgery, or spending another year under Rick Anderson's tutelage. If all else fails, he could transition to the bullpen in year two. 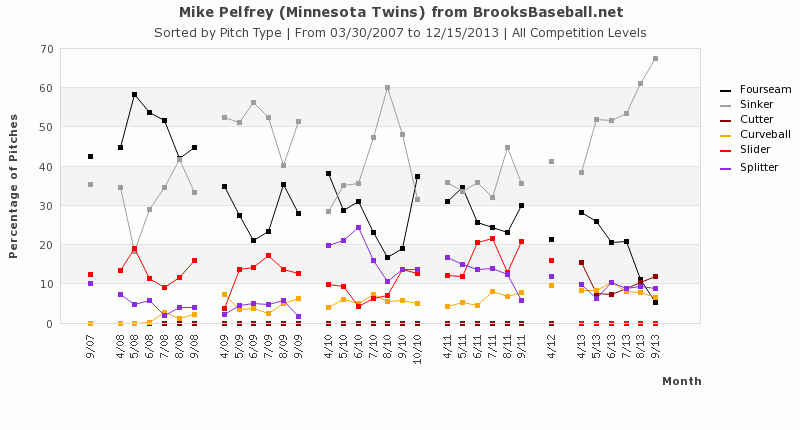 Regardless of how the veteran signings work out, you can understand Ryan's winter. He's attempted to upgrade his 2014 rotation with fours and fives—hey, beats sixes and sevens—with an obvious succession plan in mind. Come 2015, everyone should move down a peg or two. Then in 2016 a few will slide off the roster entirely, as the talented youngsters come into their own. By the time those young guns are reaching for their piece of the pie, the veterans will be dining on someone else's dime.

Ryan is building a bridge to an idyllic, cost-efficient Twins rotation. Until then, he'll have to deal with this nightmare. —R.J. Anderson

Mike Pelfrey
Fantasy owners haven't expected much out of Pelfrey in a while, and that's a good thing considering the performance he's graced us with. However, with his stay in Minnesota extended, he'll look to build off the moderate improvement he had in the second half of last season (4.39 ERA and 63 strikeouts in 82 1/3 innings). Like I said, we don't expect much, but maybe there is something to work with in AL-only formats this coming season. —Bret Sayre

For as much time we spend shouting down the contract year myth, sometimes a player's value shifts dramatically over a season. Take Uribe. Eight months ago, the chances the Dodgers would re-sign him appeared slim. But the improbable turned into the inevitable thanks to a strong rebound effort that saw him post the best single-season WARP of his career.

Uribe spent his first two seasons with the Dodgers in the doghouse. A decent enough hitter with the Giants, the third baseman struggled to keep his True Average above the .200 mark during his first 500 plate appearances in LA. Questionable conditioning bundled nagging injuries didn't help his image. He missed time in 2011 due to a sports hernia injury, then in 2012 because of arthritis in his left wrist. How those injuries contributed to his poor performance is unclear, but it would be fair to assume some impact.

The 2013 season was different. Uribe stayed on the field and played well on both sides of the ball. Most of his offensive value stemmed from an uncharacteristically good batting average, but his power production returned to a degree and he even stole some bases. Defensively, his strong arm remains his best asset, and the metrics—however questionable they may be—were smitten with his performance.

Pegging Uribe's future path is no easy task. His career arc resembles a serpentine and there are limited instances where a player similar to him cratered and rebounded. Generally, there are three reasons why a player can stick around despite back-to-back awful seasons. The most common being: 1) the player is young, 2) the player is injured, and/or 3) the player contributes in other areas. In Uribe's case, we have a little of the latter two. The extremity of his collapse completes things, too, and Jerry Hairston Jr. is the only other player to hit better than average after back-to-back sub-.210 TAv seasons. He, it should be noted, posted a .254 TAv in 2009, the following season.

Given the third-base market, the Dodgers would probably take that effort smiling. The realistic outcome isn't Uribe repeating his 2013 season but, rather, avoiding his 2011-2012 meltdowns. If he does that, the Dodgers probably come out okay. —R.J. Anderson

The Dodgers retention of Uribe does little for his fantasy value. Uribe’s had a few ups and a lot of downs over his career. If he retains his 2013 form he is still only relevant in deep and NL only leagues. Uribe doesn’t project as a top 15 third baseman as his days of hitting 20 HRs are probably gone.

Hanley Ramirez
The deal does ensure at least another year of SS eligibility for Hanley Ramirez. Production at the hot corner might be a bit scarce, but there’s a genuine drought of good fantasy shortstops. —Mauricio Rubio

You need to be logged in to comment. Login or Subscribe
WoodyS
Uribe looks bad in the field (and at the plate and on the basepaths, for that matter), but his defensive performance last year was stunningly good. As you imply, a secondary factor in the Dodger decision to bring him back is that he has a brother-like relationship with Yasiel Puig.

Reply to WoodyS
davidpom50
Whenever I watch Uribe play 3B, I just imagine myself making a highlight reel to show a little league team someday, entitled "how not to play 3B." He's stiff, he's slow, his fundamentals are non-existent, but somehow he makes it all work REALLY REALLY well. The strong arm helps a lot (but still looks super awkward), but I imagine a huge chunk of his success is studying batters to improve his positioning.
Reply to davidpom50