Catcher framing is no longer one of those forces. Thanks to PITCHf/x, we can quantify it, albeit imperfectly. It’s not easy to untangle the contribution of the catcher from all the other factors that affect whether a pitch is called a strike, but thanks to the work of Mike Fast, Max Marchi, and others, we have a decent idea of what a good framer is worth, and which catchers do and don’t deserve that description.

I’ve written often enough about framing to know that not everyone believes this is so. Some people don’t trust the technology; others, understandably, don’t believe the analysis that suggests that receiving skills alone can be worth a win or two, or even upwards of three at the extremes.

So forget about framing, for the moment. Let’s assume it’s a myth, or that its impact is exaggerated. How else can we explain Jose Molina’s career trajectory, and his new contract?

Molina has played for four organizations and been a big-league catcher for parts of 14 seasons. For the first 12 of those seasons, there was one constant in his career: he wasn’t a starter. The closest he came to a regular role was in 2008, when Jorge Posada’s season-ending shoulder surgery in mid-July left the Yankees with a choice between Molina and Chad Moeller. They didn’t like either answer, so they went with Option C: trade for a 36-year-old Ivan Rodriguez. Molina ended up with 81 starts anyway, but Posada’s injury didn’t turn out to be Molina's big break. The next year, he went right back to backup duty, averaging 51 games and 46 starts at catcher from 2009-11.

And then something strange happened: after signing with the Rays in November of 2011, a 37-year-old Molina played in a career-high 102 games—not because someone better got hurt, but by design. Stranger yet: last season, at age 38, Molina topped 300 plate appearances and started more than half of his team’s games for the first time. As I wrote recently, only three other players in the past 50 years have set a career-high PA total at or after age 38.

So how did Molina join that exclusive club? Why, after well over a decade as a part-time player, was Molina made a starter by a contending team at an age when most players are either retired or about to be? And why is that same contender giving him a guaranteed two-year contract—his first such deal since 2007—to reprise that role through age 40?

We know it’s not his hitting. Molina’s True Average and OPS+ last season were .222 and 68, respectively. Only five AL players made at least 300 plate appearances last season and finished with a worse TAv. Oddly, Molina hasn’t shown much, if any, decline at the plate—his career True Average and OPS+ are also .222 and 68. But even if he’s not much worse than he always was with the bat, he isn’t any better. And for most of his career, that bad bat doomed him to backup duty.

We also know it's not his blocking—he’s below average at that. Nor is it his arm. Molina still throws out attempted basestealers at an above-average rate, but only barely. Granted, the Rays’ staff doesn’t do him any favors in that regard, but he hasn’t become a better thrower. He’s always had an excellent arm. And he’s always had a good reputation for calling a game, working well with pitchers, and so on. Those are the qualities that have kept him in major-league meal money, which he appears to have made the most of.

Yes, it’s a weak market for catchers, and sure, the low-payroll Rays have to save money somewhere. But if Molina can’t hit, can’t run, and can’t block, what makes him worth the money, the opportunity cost, and the plate appearances? And if no team saw him as a starter when he was younger, more mobile, and a lower injury risk, why are the Rays so sweet on him now? These are common questions in Tampa Bay, among those who haven’t seen or subscribed to the studies on receiving.

@TBTimes_Rays @JonHeymanCBS why in the world would we resign this guy? He's an absolute liability offensively.

@B1G_Jents Few million that could have went elsewhere…..

There are only three possible explanations for Molina’s Rays-December romance. The first is that the Rays don’t know what they’re doing. The second is that Molina has gotten significantly better at something since his backup days. And the third is that the true value of something he always did has only recently been discovered.

The Rays’ success and series of smart moves over the past several seasons makes the first explanation unlikely. Molina’s age and continued offensive ineptitude make the second a stretch. So there has to be something he always did that was worth more than anyone thought. Even in the absence of other information, Molina’s late-career rise to a prominent role would still suggest some previously hidden contribution of which the Rays are aware, just like the slight wobble or dimming of a distant parent star suggests the presence of an unseen orbiting planet.

Some of today's sensitive instruments can pick up those planets, and others can detect the difference Molina makes. Those instruments tell us that even at age 38, Molina was baseball’s best receiver, which means that it makes sense to start him despite what he does at the plate. So it's probably not a coincidence that Molina's career path turn a sudden turn just two months after Mike Fast published his first findings about framing.

As I mentioned in my article about Brian McCann’s new contract, Max Marchi’s research revealed that framing is the rare baseball skill that barely declines with age: 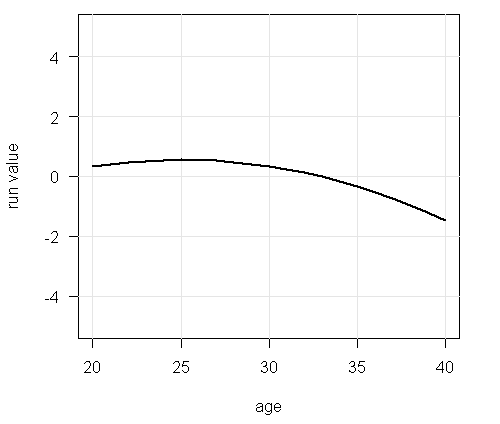 And Molina's receiving, according to Max’s more conservative estimated method, has only improved over time: 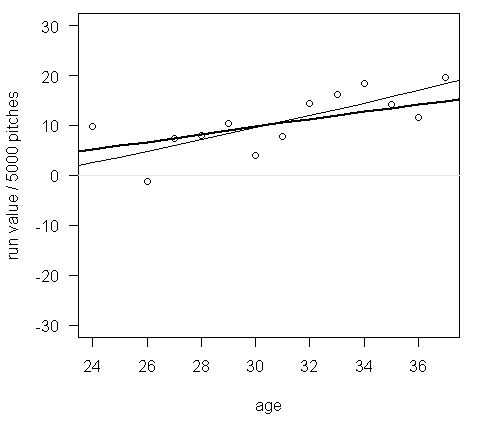 So why isn't Molina making even more money, if his framing skill is so valuable? It could be because other clubs haven’t caught on, though the Tampa Bay Times’ Marc Topkin reported that several teams were interested. Or maybe Molina gave the Rays a discount, preferring, as Topkin suggested, to play for Joe Maddon on a contending team close to Puerto Rico.

But it might be more obvious than that. Between his bat, his body, and his age, there are legitimate reasons not to commit to Molina for multiple years, even if you know what his defense can do. The Rays recognize his value, but that doesn’t mean that they’re popping champagne, or that they wouldn’t like someone a little less limited (like Ryan Hanigan). They signed a player with warts and got the most bang for their buck, but they also sentenced themselves to two more years of having him hit. Watching his weak groundball outs won't be fun. But it probably will be worth it.

We might not see Rays minor league free agent signee Ali Solis this season, but if we do, it will be because he’s a poor man’s Molina. The Padres signed Solis as an amateur free agent out of Mexico in 2005, and he spent seven seasons in San Diego’s system, with a call-up for five games in September of 2012. The Pirates claimed him off waivers a month after that, and he hit .179/.231/.214 in 29 games between Double- and Triple-A. The 26-year-old is a lifetime .255/.290/.374 hitter in 730 Double-A plate appearances.

The skill that makes him interesting is the same as Molina’s: in those 29 games, Max’s estimated minor league framing method credited him with 11.1 receiving runs saved (plus another 25 runs in his upper-level work from 2009-12).

Here’s what Mark Anderson told me about him this summer:

No offensive skills to speak of, lacks pop, poor approach, swings through quality stuff a lot. Didn't get much on him from this year, but guys that had seen him in the Padres organization liked his catch-and-throw, consistently down to 1.90, quick feet, good transfer and release. Accurate, above-average arm. Solid receiver, calls a decent game.

I also asked a pro scout for his thoughts. “He’s a legitimately good receiver,” the scout said. “Can’t hit.” Sounds like Solis has reached the right organization.

You need to be logged in to comment. Login or Subscribe
khaulotte
I am sure you have addressed elsewhere, but when will framing be included in WAR here at BP? I want yadi to get the credit he deserves when I open his player page! As always, thanks for your great work.
Reply to khaulotte
jlarsen
I love when people act as if 4.5 MIL over 2 seasons is something insanely high...while the Rays are known to have some of the smarter fans around the league, people like those mentioned above show how hard it is to be a fan sometimes.
Reply to jlarsen
doctawojo
"Rays-December romance" smh Ben. smh.
Reply to doctawojo
AWBenkert
The Rays have a fan base? Who knew?
Reply to AWBenkert