Between his generic name, his low-profile role, and the timing of this team change, Smith seems determined for no one to know who he is. But while breaking news about bigger free agents overshadowed the first reports of the setup man’s signing on Saturday night, Smith deserves a few seconds in the spotlight. And so does Angels GM Jerry Dipoto, who must have mixed feelings about the move he just made.

Smith debuted with the Mets in 2007 as a sidearming sinkerballer who couldn’t get opposite-handed hitters out. He’s still a sidearmer, but over the past few seasons he’s been an equal-opportunity out-getter, growing even tougher on righties while solving his struggles against southpaws. 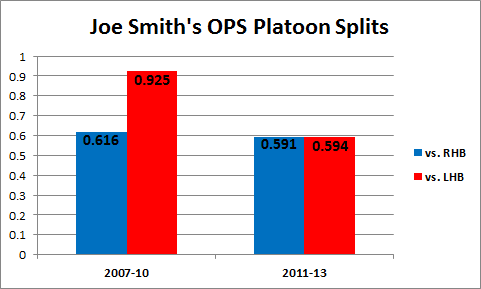 Smith's secret appears to be a shift in pitch selection: 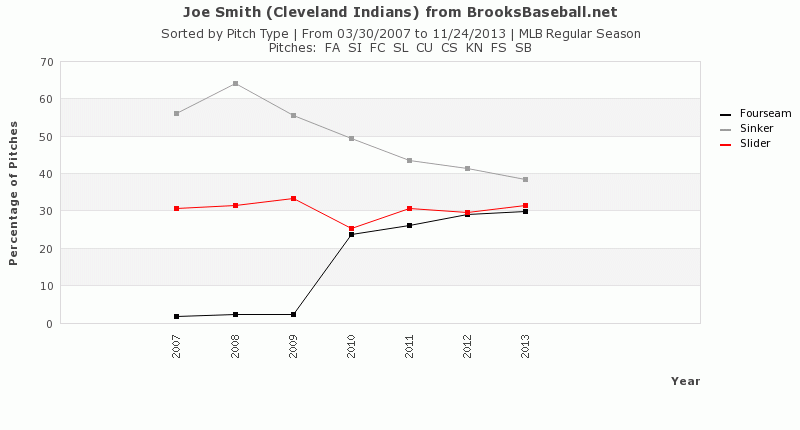 Smith started out throwing sinkers and sliders almost exclusively (not pictured: a changeup he threw rarely and retired after 2010). Both of those pitch types tend to yield large platoon splits, which left him without a weapon against left-handed hitters. Over the past several seasons, he’s eased back on the sinker and started using a four-seamer much more regularly, keeping his slider rate constant. If his pitch selection continues along its recent trajectory, the three offerings might intersect next season, with each thrown a third of the time.

The 29-year-old's four-seamer is far from overpowering—it sits at 91 mph—but he keeps it down and off the corners and delivers it from a spot that hitters aren’t used to seeing, which has sunk even lower with time. 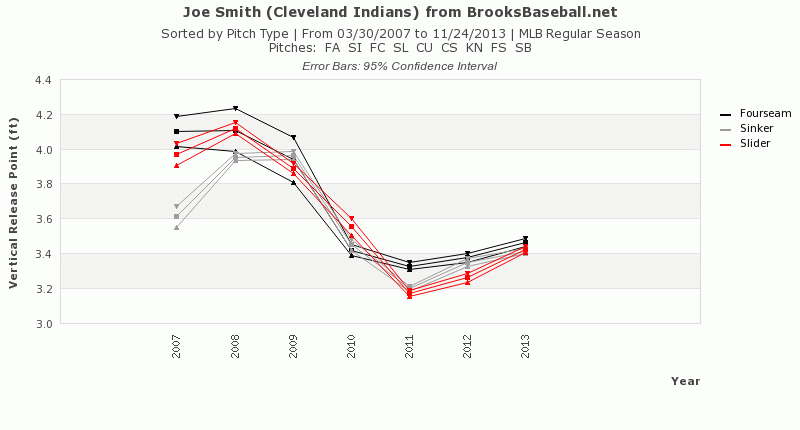 Smith’s strikeout rates aren’t flashy, and he doesn’t have pinpoint control, but he keeps the ball on the ground and in the ballpark. Nearly 60 percent of his career balls in play have been on the ground, though with his sinker usage falling fast, his grounder rate declined to a career-low 52 percent last season, its first time under 55 and a far cry from its early seasons in the 60s. Thus far, though, a lower groundball rate has been a small price to pay for effectiveness versus southpaws. Smith has transformed himself into one of baseball’s best non-closer bullpen arms, and because he can be used against batters on both sides of the plate, he’s accrued the 17th-most innings of any full-time reliever over the past three years. He quickly earned Terry Francona’s trust last season, entering games with the highest average leverage index of his career and besting everyone in the Cleveland relief corps in that category, save for closer Chris Perez.

So that’s why the Angels want Smith. The question is why they want him enough to sign him to this contract. Last winter, only four relievers landed three-year deals: Rafael Soriano, Brandon League, Jonathan Broxton, and Jeremy Affeldt. Two of those pitchers have already busted, which gives you some sense of teams' success rate when signing relievers to multi-year deals. To be fair, rising broadcast revenues have made clubs richer than they were a year ago, and all four of those contracts had higher overall values than Smith’s. The length is scary, but the AAV isn’t as bad—20 relievers made $5 million or more in 2013.

It’s fair to complain about the price, but don’t bother lecturing Jerry Dipoto about the dangers of committing money to relievers. He already knows. “I wish I could tell you there was an element of rocket science to it,” Dipoto said about building a bullpen last April. “There isn’t.” And even more relevant to today’s TA: “When you’re going out and trying to buy the back of your bullpen in the free-agent market, it’s a little bit of a game of Russian roulette.” There’s no shortage of examples from recent (albeit pre-Dipoto) Angels history that support his point, among them Justin Speier and Fernando Rodney. Smith is only the second reliever Dipoto has signed to a multi-year deal—the first, Sean Burnett, got two years last December and spent most of the first on the DL en route to elbow surgery.

So why did Dipoto do this when he was aware of the risk? It might be partially because he believes that Smith’s unusual release point makes his whole bullpen better. Another quote from last April:

In the meantime, he is gently steering the Angels away from a bullpen dominated by right-handed power arms and toward a collection of arms with what he calls "different looks" — different arm angles, different out pitches, different velocities.

"You want to try to create as much diversity as you can," he said.

It would be difficult to quantify the value of that diversity, but it is something Smith supplies. Still, that’s probably not a sufficient explanation for why Dipoto dispensed a contract outside of his comfort zone. There’s always the chance that this was an Arte Moreno-mandated move, but if not, desperation might have something to do with it. Only the Astros, Twins, and Cubs had less effective bullpens last year, after adjusting for park. The Angels intend to compete in 2014, and Dipoto—whose job security has been a subject of frequent speculation—won’t survive another disappointing season. If Smith’s deal doesn’t work out, either the Angels will win anyway or Dipoto won’t be around to worry about the back end.

For those of you wondering whether Smith’s signing has any fantasy impact: yes, if you’re in a holds league, but less likely if you’re interested only in saves. Dipoto said on Friday that Ernesto Frieri would close in 2014, which was either the truth or a prelude to signing someone else with experience in that role. Smith could pick up some saves if other arms are injured, and but soft-tossing sidearmers with mediocre strikeout rates rarely get the permanent ninth-inning nod.

You need to be logged in to comment. Login or Subscribe
bhalpern
As an Orioles fan I can attest to the insanity of this.
Kevin Gregg 2y/10m
Mike Gonzalez 2y/12m
Dannys Baez 3y/19m
Chad Bradford 3y/10.5m
Jamie Walker 3y/12m
If not for Koji Uehara at 2y/10m (and subsequently traded for Hunter and Crush) they would have nothing to show for all of it.
Reply to bhalpern
grandslam28
Would you rather sign a guy to 2 years 12 million or 3 years 15?
Reply to grandslam28
davescottofakron
Because everyone loves trivia: It freaked me out that you had the left OPS (red) on the right and the right OPS (blue) on the left.
Reply to davescottofakron