Note: This winter, I'm rereading and reviewing Nate Silver's entire archive here at BP. Today will be a longer one.

5. PECOTA at Altitude: A Review of Major League Hitters in Colorado
February 21, 2003

Abstract: Using PECOTA’s breakdown of players’ hitting attributes, Nate looks for correlations between certain offensive approaches and success (beyond PECOTA expectations) in Colorado’s thin air. He concludes, from a sample of 29 major-league hitters, that batters with high strikeout rates benefit from Colorado, and batters with high walk rates suffer. (Isolated power showed no advantage.) “For each one percent increase in strikeout walk rate, a Rockie hitter receives a "bonus" of about two points of EQA above and beyond his performance in a neutral park; for each one percent increase in his walk rate, he receives a penalty of four points of EQA.”

Key Quote: “However, the Rockies may also have a profound structural advantage that they stand to benefit from: based on the history to date of performance in Denver, certain types of hitters appear to benefit disproportionately from the high-altitude environment. In particular, high-strikeout, low-walk hitters – players like Wilson, Hernandez, and Johnson – are more valuable to the Rockies than they are to anyone else. In stockpiling these players, potentially at a market discount, the Rockies have a comparative advantage.”

Follow-up: So far as I can find, Silver never revisited this, and so far as I can find nobody else did, either. But, of course, Major League Baseball itself kept scheduling baseball games in Colorado, so the follow-up data is there for any of us to look at. Let's!

What does that mean for players that will be new to Coors this year? All three of the Rockies' major position player acquisitions–Preston Wilson, Jose Hernandez, and Charles Johnson–are in a position to benefit. … The differences are substantial. Our model believes that Jose Hernandez could gain as many as forty points of EQA by virtue of being a Rockie. Because that score accounts for both his performance both at home and on the road, his performance at Coors could be truly lights out.

Adjusted for the Coors Field effect, Silver speculated that Wilson’s .279 projected EQa could become .299, that Hernandez’s .240 becomes .278, and that Johnson’s .261 turns into .277. Actual results: Wilson .276, Hernandez .224, Johnson .250. So not only did the three high-strikeout/low-walk Rockies not get the high-strikeout/low-walk boost, they all underperformed PECOTA’s unadjusted projections. The specific prediction flopped, badly.

As for the larger idea, I recreated Silver’s approach, more or less. I took a few shortcuts (because of time, and because of my more limited ability to grab, sort, and interpret data the way Silver can), and instead of EqA I used the since-updated version of it, True Average, for continuity. I found 26 player-seasons since 2003 by new Rockies who had substantial playing time with another team. “Substantial” was a minimum of 400 plate appearances in the previous three seasons, though if that seems low to you then rest assured that 25 had at least 600 plate appearances, and 22 had at least 1,000. Instead of PECOTA projections—running PECOTA TAvs to project a stat that didn't even exist in 2003 would have been extremely labor-intensive for somebody around here—I used a simple 5:3:2 weighting method for the previous three seasons to generate a simple projection for each player’s first year in Coors. (Silver himself sometimes used the 5:3:2 method as "a reasonable proxy for the player's expected productivity" at the time.) For players’ strikeout and walk rates, I took the players’ rates over the previous three seasons, unweighted and unadjusted.

So 26 players with significant time elsewhere, each of whom gets a projection for his first year in Colorado, and each of whom is classified as a high- or low-strikeout and high- or low-walk hitter. As Silver did, here’s the chart of players, with projections and actual performance:

Keeping in mind that the projections are very, very rough, that’s 13 players who outperformed expectations and 13 who underperformed. Hard to find the pattern by eyeballing it—Colvin and Belliard are polar opposites at the top, as are Scutaro and Jose Hernandez at the bottom. It’s not really much easier to find the pattern by charting it. Blue is good, green is bad: 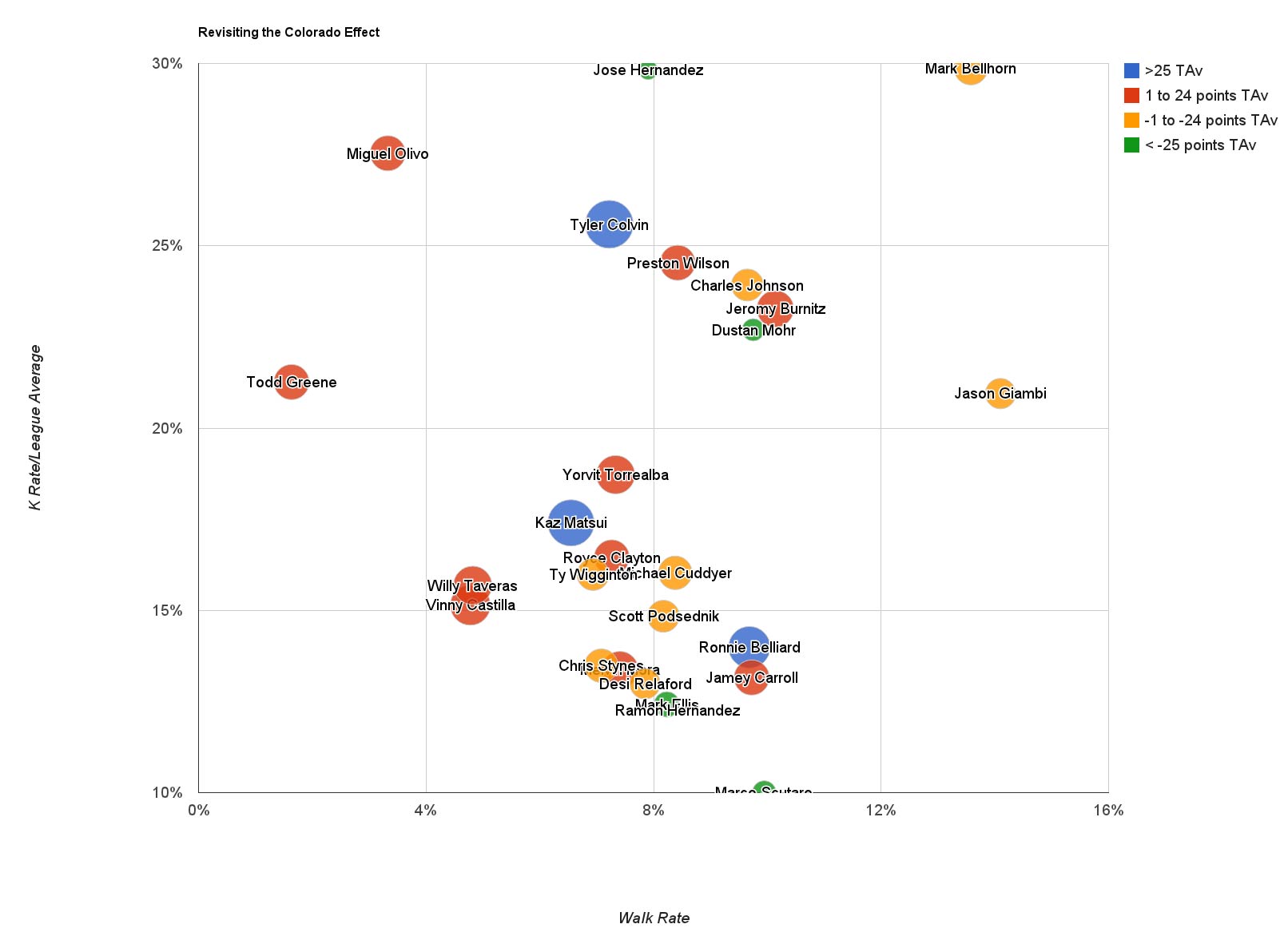 Five hitters in the sample had walk rates significantly below the league average, and strikeout rates significantly above it. All of them exceeded their PECOTA forecast, and four of them – Bichette, Galarraga, Charlie Hayes, and Todd Hollandsworth – exceeded it by at least 25 points of EQA. Certainly, your mileage may vary.

Our mileage does vary (though we should note one last time the caveat that we're using a much rougher system for projecting). There’s a bit of concentration of modestly good results on the left, for low-walk guys, but not really in the top, for high-strikeout guys. Olivo and Greene are both in the top left and outperformed their projections, but by very small margins—two points of TAv for Olivo, and four points for Greene (who, perhaps relevantly, is the guy who provided the fewest plate appearances from which to generate a projection).

Taken together, then, we might still conclude that the Rockies could make a tidy profit by signing low-walk hitters, who are more valuable to them than to any other team in the league. Signing high-strikeout hitters might be useful, but to a much smaller degree.

The larger question, really, is why the Rockies haven’t figured out a way to win consistently in the 11 seasons since Silver wrote this. Intuitively, Silver’s findings suggest that the Rockies should have a huge advantage. While 29 teams are fighting for one type of player, the Rockies can quietly scoop up the other type. They can (theoretically) do it at a huge discount: if there’s an army of .220-TAv guys who become .250-TAv guys as Rockies, then Colorado ought to be able to sign a bunch of .250-TAv guys at .220-TAv prices. (Note: this should work for pitchers, too. If the style of play affects particular hitters more than others, it stands to reason there is a corresponding type of pitcher who can be had cheaply.) If we trust the data, we would encourage the Rockies to consider a particular type of available player this offseason: free agents like Marlon Byrd, A.J. Pierzynski, Michael Morse, and Alex Rios; trade targets like Mark Trumbo, Chris Heisey, and Howie Kendrick; scrap-heap buys like Brent Lillibridge, Clint Barmes, and Jesus Flores.

Yet the intuitively crackable nut has been demonstratively tough to crack. The Rockies have lost an average of 86 games per season since Silver’s piece. They’ve still never in franchise history won the NL West. The two-percent Rays have won 90 games in five of the past six years; the Rockies, who apparently have their own two percent in the very air they breath, have managed to win 90 games twice in two decades. They appear to have ignored Silver's prescription: of the 26 established players they have added, seven are in the desired quadrant. (To be fair, if we toss out the strikeout component (which now seems to be less important or unimportant), they seem much more intentional, with almost 70 percent of their additions walking less than the league average.) We forecast the 26 to cumulatively produce a .249 TAv in a non-Colorado environment. They have actually produced a .248 TAv. Whether Silver answered the question 11 years ago—and it appears he discovered something true, if not as true as it appeared—it doesn't appear that the Rockies have yet figured out how to turn an asset into a profit.

Proto-PECOTA joke: “With an interspersion of red triangles and green diamonds that is neither wholly ordered nor wholly random, the chart looks a little bit like a thirty dollar rug from IKEA (PEKÖTA?).”

On the Nate Silver Must-Read Scale: 2

You need to be logged in to comment. Login or Subscribe
kenarneson
"PekÃ¶ta" is meaningless. Closest thing in Swedish would probably be "Pek kota", which means "pointing vertebra". If that helps at all.
Reply to kenarneson
HPJoker
I can understand how a low walk/low strikeout hitter would work well in Colorado. Mile High/Coors Field has had the highest park factor for singles since it was built. Make contact more often, the more often the ball will fall in play at Coors. The gain in batting average can help make up for the missing OBP gained normally by walking.

I might be thinking about this the wrong way, but isn't it weird trying to find a correlation between production and a negative outcome for a ballpark? I know where Nate is getting at (balls in play fall in for hits more often, lessening the punishment for striking out), but it just seems weird.
Reply to HPJoker