While looking toward the future with our comprehensive slate of current content, we'd also like to recognize our rich past by drawing upon our extensive (and mostly free) online archive of work dating back to 1997. In an effort to highlight the best of what's gone before, we'll be bringing you a weekly blast from BP's past, introducing or re-introducing you to some of the most informative and entertaining authors who have passed through our virtual halls. If you have fond recollections of a BP piece that you'd like to nominate for re-exposure to a wider audience, send us your suggestion.

Tommy Bennett examined the elements that lead to an enjoyable World Series in the piece reprinted below, which was originally published as a "World Series Prospectus" column on November 2, 2010.

At some point during Derek Holland’s third batter faced in Game Two of the World Series, I realized that the level of play on display was not especially high. Holland had come into a relatively tight game—which the Rangers trailed by just two runs—and promptly doused the infield with gasoline. Theretofore entrusted to the right hand of Darren O’Day, the bottom of the eighth had gone like this: K, K, 1B. Holland, called upon by Ron Washington to record a solitary out against a lefty—the one thing you ought to be able to count on in a lefty reliever—walked Nate Schierholtz on four pitches. Then he walked Cody Ross on four pitches. Then Aubrey Huff on five.

After that last walk—which allowed a run to score and was only the beginning of a two-out unraveling that led to a 9-0 drubbing—I think a great many fans decided that the 2010 fall classic was a bad World Series. Never mind the middling average television market for this year's matchup. By “bad” World Series, I simply mean to conjure the image of a best-of-seven contest that isn’t well-contested, in which both the individual games and the overall series outcome aren't close, and in which the players themselves are somehow second-rate. I think there’s a grain of truth in that evaluation.

The Once and Future Flotsam
Consider how many of the players in this series have, at one point or another in their careers, been deemed almost completely worthless. Not just injured, but essentially zero-value properties. There are obvious examples like Pat Burrell and Ross, who just months ago were literally freely available, at least at their relative price points. Huff, too, was traded from Baltimore to Detroit in August of 2009 for an 11th-round reliever who has yet to throw a pitch above Single-A. Andres Torres was a career minor leaguer until last year. Jonathan Sanchez’s control problems were viewed as serious enough that in 2009, the Giants questioned his ability to start over the long term. Santiago Casilla has survived both an age scandal and an outright release last winter. Guillermo Mota was an Expo, has played for seven different teams, and was suspended for 50 games after testing positive for a performance-enhancing drug.

And that’s just the Giants. As for the Rangers, Colby Lewis returned to the U.S. this season after a sojourn in Japan. C.J. Wilson was a failed closer whose primary source of fame was a popular Twitter account. Darren Oliver is apparently still a baseball player! Vladimir Guerrero signed a one-year show-me deal after a dismal 2009 that ostensibly portended the twilight of his career. Nelson Cruz was a fringy Quad-A outfielder closer to 30 years old than 20 as recently as 2007. Josh Hamilton came as close to ruining immeasurable potential as any player in recent memory.

Of course, most of those players are actually useful. There are plenty of players on these rosters that are still pretty worthless. Players like Pablo Sandoval, Bengie Molina, Jeff Francoeur, and Mark Lowe are all basically replacement-level guys at the moment. So what you have is this combination of players that are either (a) currently or (b) very recently not anywhere close to World Series-caliber players.

What Do You Want from Us?!
Given these appearances, what would it take for us to get a truly classic World Series? In evaluating the quality of a series, I generally take the following factors to be influential:

Notice that of those factors, only the first two will be apparent before the series begins. I think these are two very good teams. In fact, historically, the combined quality of the 2010 pennant winners stacks up pretty well (actually, these are harmonic means of Pythagorean winning percentages):

This year’s teams are just about in line with how good previous World Series teams have been, at least according to Pythagorean record. Maybe, though, the difference in quality between the better team and the worse team has some impact on the other factors (particularly the length of the series)? The chart below tracks the relationship between the difference between the World Series teams’ Pythagorean records and the number of games in the series. 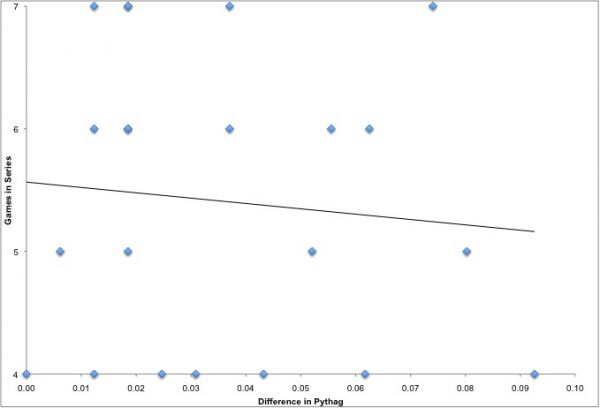 Well, it certainly doesn’t appear that way. The relationship is extraordinarily weak—indistinguishable from what a random set of outcomes would look like. I also think the likelihood that an individual game will be close is pretty random. Everyone expected the marquee Game One matchup between Tim Lincecum and Cliff Lee to be a deadlocked pitcher’s duel, and it wasn’t—that hotly anticipated nail biter didn't come to fruition until their Game Five rematch. And if how close each game turns out is pretty random, so too would have to be the likelihood of extra innings.

Question of the Day
My working theory is that for a series to be a truly memorable classic, people need to be emotionally invested enough in the early games of a series that they’ll be glued to the TV when and if the variables conspire to yield seven games or extra innings. Without that initial investment, it’s hard to follow the emotional storylines that we all (even numbers dorks) use to remember the ups and downs of the playoffs. What this year’s series lacked—after the initial failure of the first game to satisfy the hype that attended it, and the second game to remain close—was the requisite level of fan involvement to support even the remote possibility of a Rangers comeback.

Of course, all of this understates (or rather ignores) the value that a World Series has to the fans of the participating teams. What other factors contribute to the creation of a classic World Series?