Between fourth grade and eighth, we’re all at least once where the Cardinals are. There are 10 of us on the field or the court, and as we’re dividing up into two teams we’re all too aware that one of the 10 is so much better than the rest that the game is settled as soon as he is chosen with the first pick. He’s six feet; we’re four. He’s shaving; we still secretly have a teddy bear. He’s on a traveling team; we’re on our church choir. He will never, ever lose.

That doesn’t happen in the majors, where the difference between Pete Kozma and Miguel Cabrera is relatively small, but it’s happening to the Cardinals right now. Take out each team’s best hitter so far—David Ortiz and Matt Holliday, probably—and the Red Sox would be hitting .151/.209/.267, a bit worse than Jeff Mathis’ worst season. The Cardinals aren’t all that much better, but their .208/.266/.243 line without Holliday is certainly a step up.

So how have the Cardinals tried to get Ortiz out so far, and how has it changed as each plan has failed? A quick tour.

Interestingly, the league doesn’t throw that pitch to Ortiz as often as it used to, back when Ortiz’s bat was supposed to be slowing down. Looking at all fastballs thrown to Ortiz, here’s how many have been in the top third of the zone or higher, and over the plate:

Maybe McCarver’s got an old scouting report. Wainwright gets the pitch past Ortiz. He throws it again, an inch or two lower, 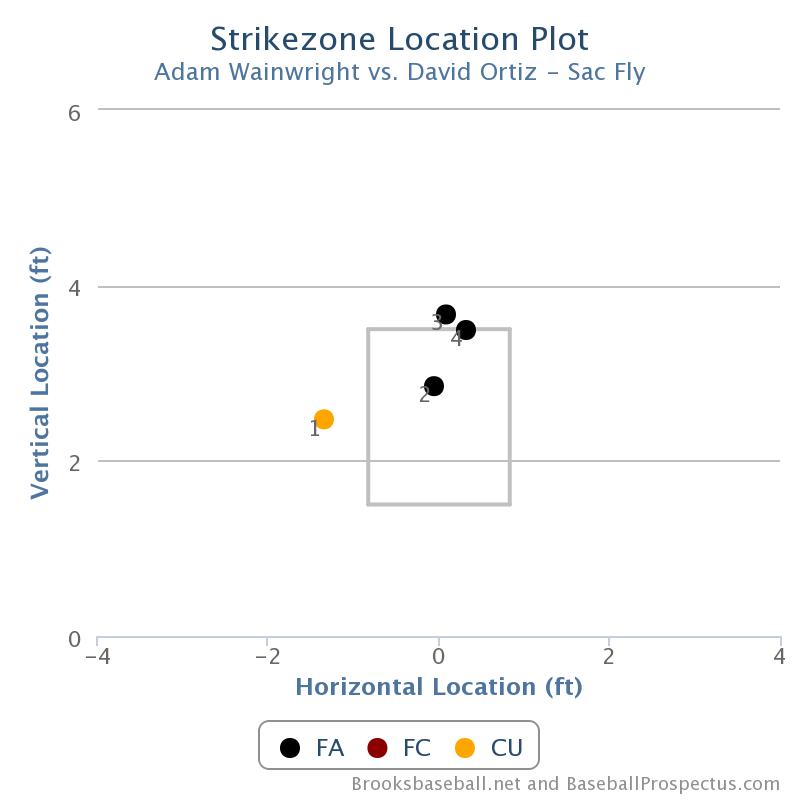 and this time Ortiz hits it over the wall, for a very deep sacrifice fly.

In the series: The Cardinals have thrown him seven high fastballs, out of 69 total pitches. They got one swinging strike, the one you saw. They allowed a home run, a line drive single, and that sacrifice fly.

“There’s really no place in the strike zone that you feel comfortable with him not hitting the ball hard,” is a sort of a sentence that McCarver says, before Lance Lynn tries to get Ortiz on low fastballs. The first one is nearly hit out:

That’s not a place many teams try to pitch Ortiz, for what turn out to be obvious reasons: Over the past two seasons, Ortiz is hitting .496, and slugging .904, on fastballs in the lower third of the strike zone. Even if you extend that group to include fastballs over the plate but out of the zone low, he’s hitting .434 and slugging .792 on low fastballs, in roughly 200 balls put in play.

(Incidentally, when you hear baseball people talk about holes in players swings that are only as big as a pint of milk, think of this graph: 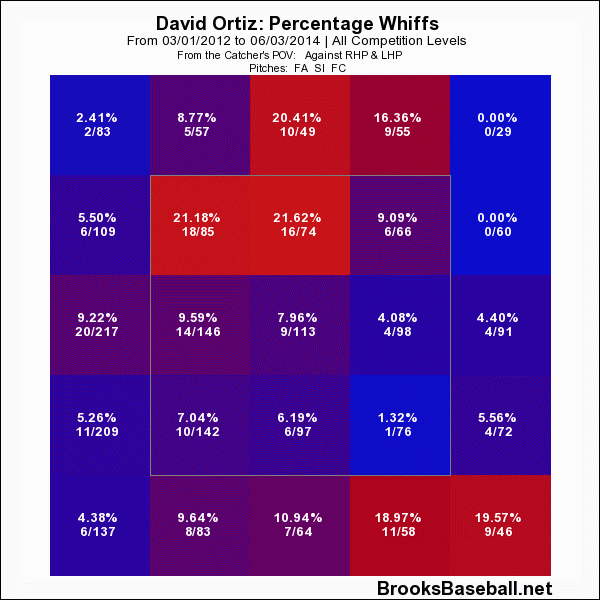 Throw Ortiz a fastball just low and on the inner half, and he’ll whiff at it a fifth of the time he swings. Throw it three inches higher, and he’ll virtually never whiff on it, and he'll slug 1.250 when he connects. That’s the margin.)

On 2-1, Lynn tries again, and this one hits the target on the outside corner, right on the edge of the strike zone. 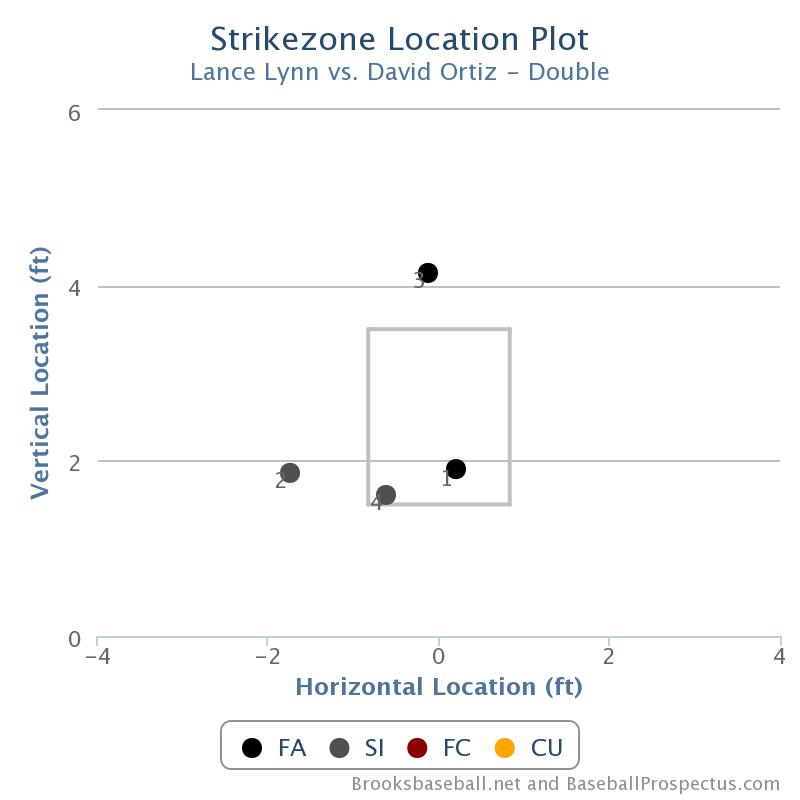 Ortiz hammers it to right-center for a double.

In the series: The Cardinals have thrown him 10 fastballs over the plate but low, or in the lower third of the zone. Of the 10, Ortiz took three for balls, took or fouled off three for strikes, and put four in play: three singles, one double.

McCarver: "The one thing the Cardinals have done to get David Ortiz out is throw him curveballs. David Ortiz used to be a very good offspeed hitter but he has adjusted. He’s very smart. Adjusted. He’s a different hitter now."

When McCarver said that, midway through Game Four, the Cardinals had actually thrown Ortiz only eight breaking balls all series. Six were out of the strike zone, and of those five were taken for balls. Of the remaining four, one was lined for a single. So they had thrown him nine breaking balls, for a 33 percent strike rate, and a .500 hit rate. They hadn't really come after him aggressively with breaking balls until Monday, when Wainwright threw him four in a single at-bat. 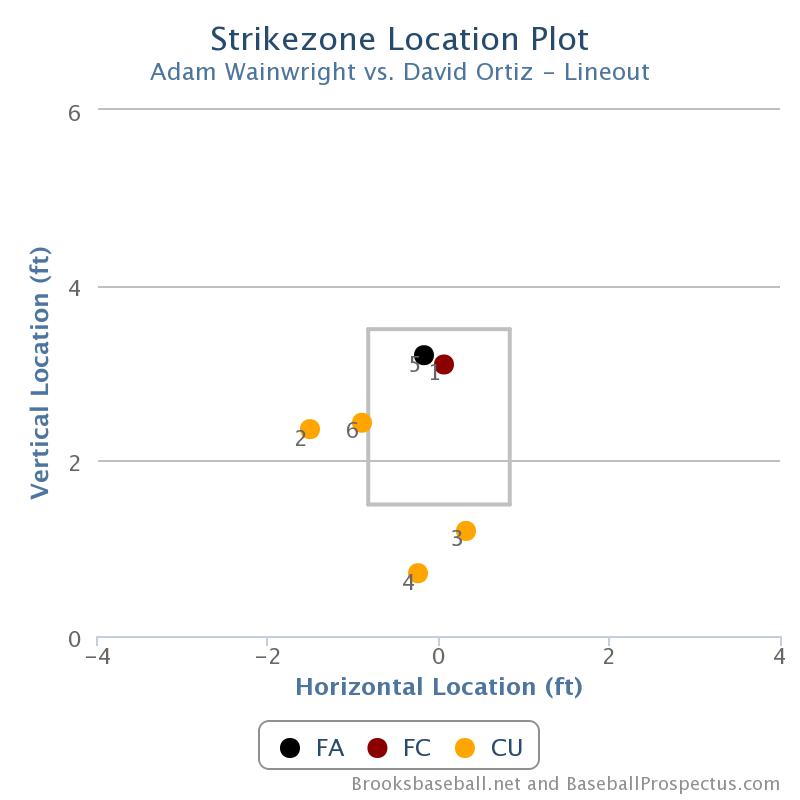 That at-bat was notable not just for the curves—which, incidentally, ended with a hard-hit liner to the center fielder—but because Wainwright was tweaking his whole delivery. As noted by McCarver and Joe Buck, he added an unnatural pause in his windup, twice. "Hitter with a leg kick- your timing mechanism is largely dependent on the consistent rhythm of the pitcher," Gabe Kapler tweeted. "Early or late a tad matters." McCarver also said Wainwright was taking longer to deliver after he got the sign, further messing with Ortiz's timing, though I wasn't totally convinced this happened. And Rick Sutcliffe, on the international broadcast, noted that Wainwright had moved from the far left of the pitching rubber (where he normally stands) to the far right.

What it ultimately comes down to, from the Cardinals' perspective, is how seriously to take Ortiz's performance thus far. It has put the Red Sox up in the series, to be sure, but is it a real phenomenon that should change the way the Cardinals approach him? Presumably, Wainwright prefers to be on the left side of the rubber, with his usual fluid windup; is it overreacting to an illusory hot streak to change his best practices now? Is it self-defeating paranoia that leads the Cardinals to pitch around him, 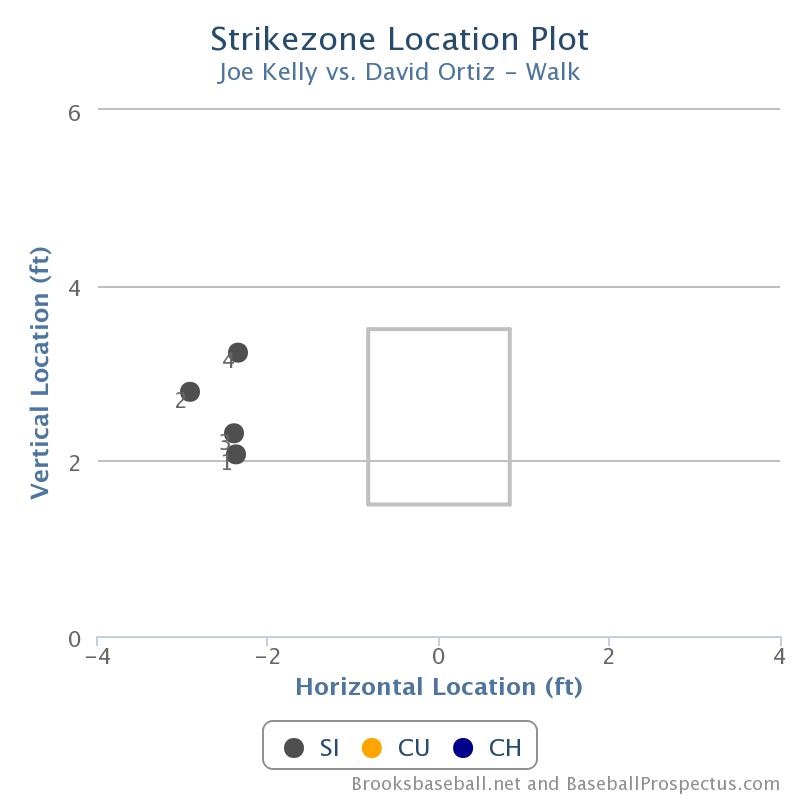 or to avoid challenging him by throwing 3-0 changeups, 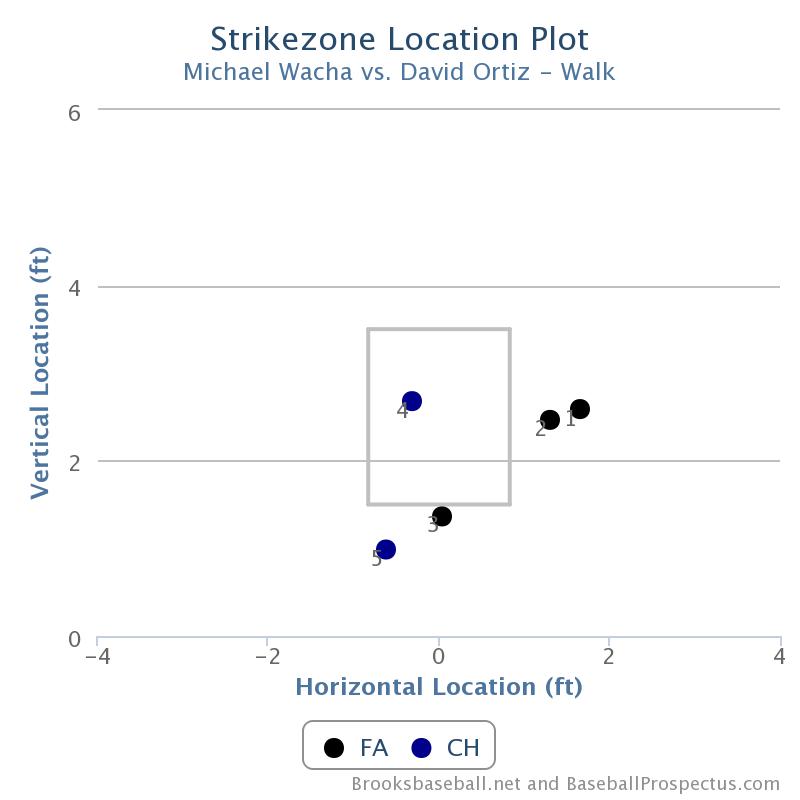 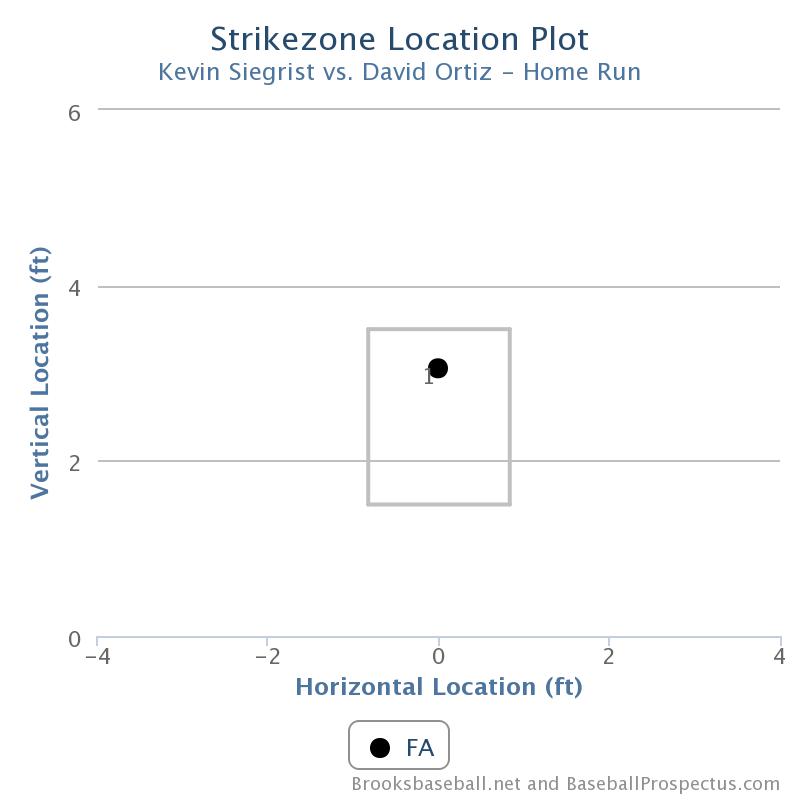 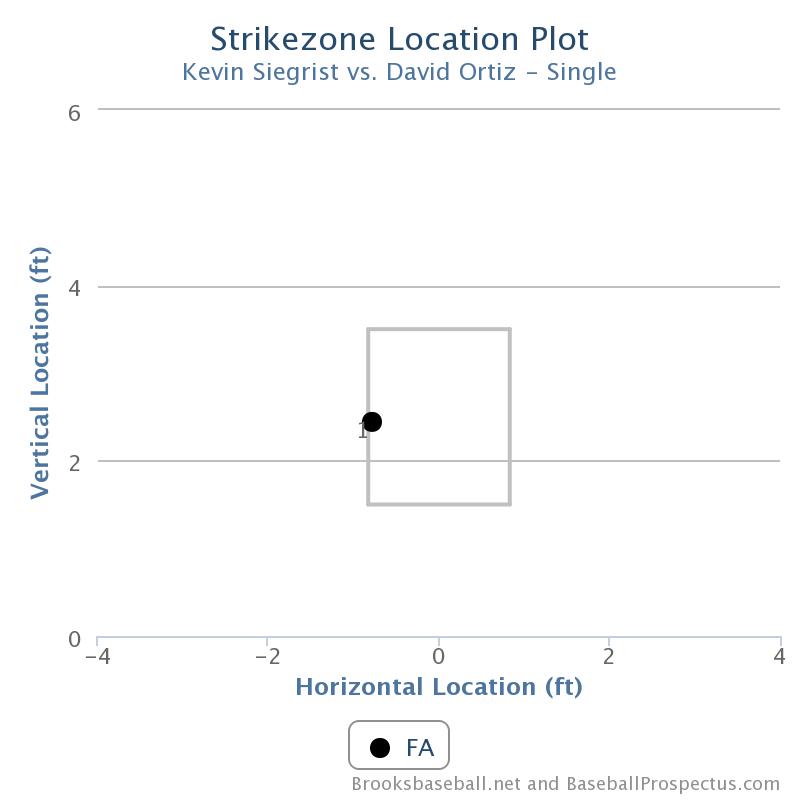 or to change the target, from inside 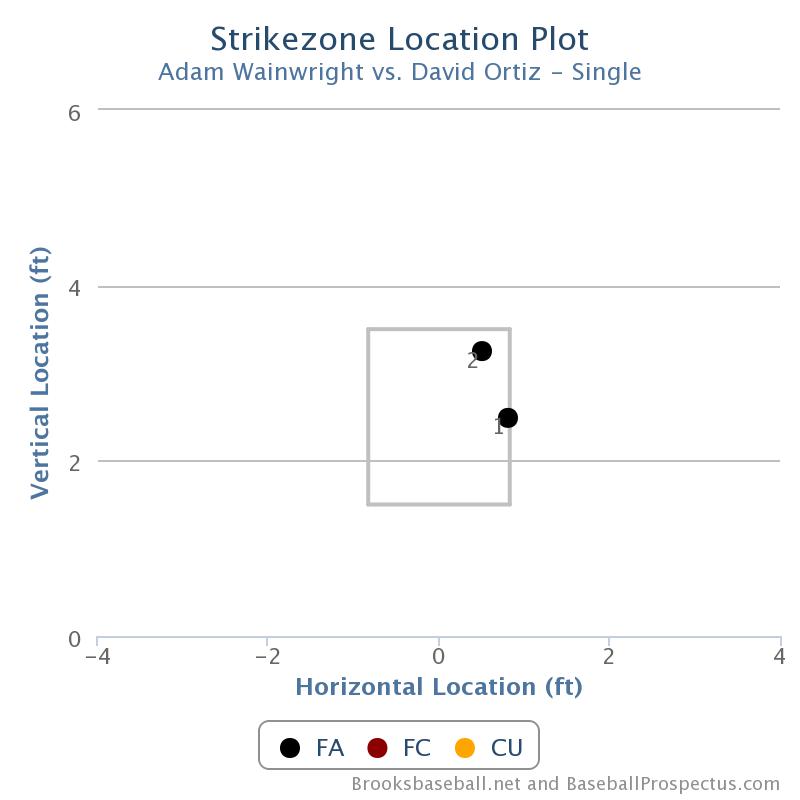 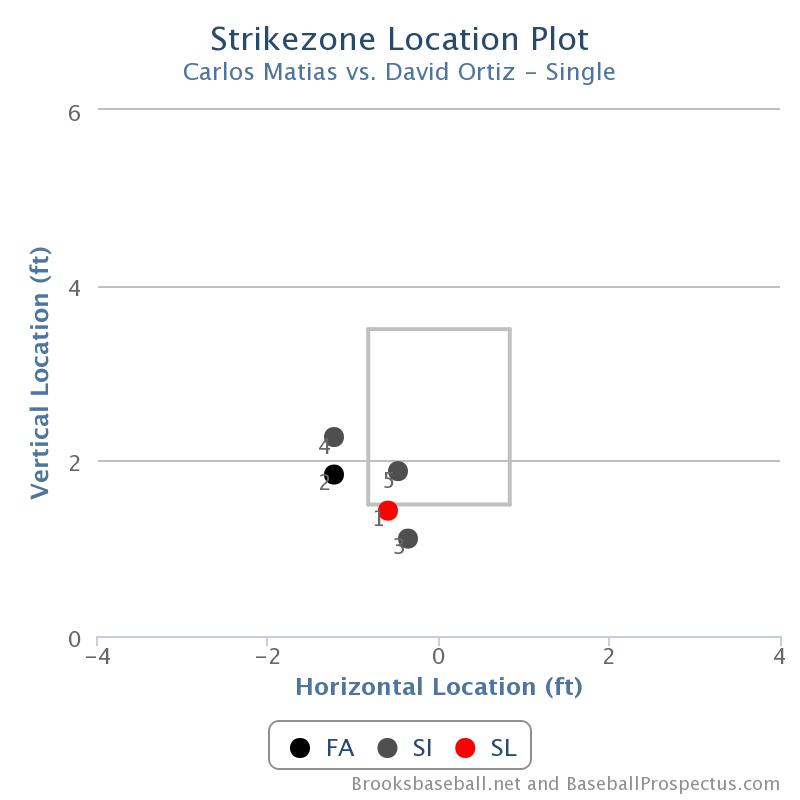 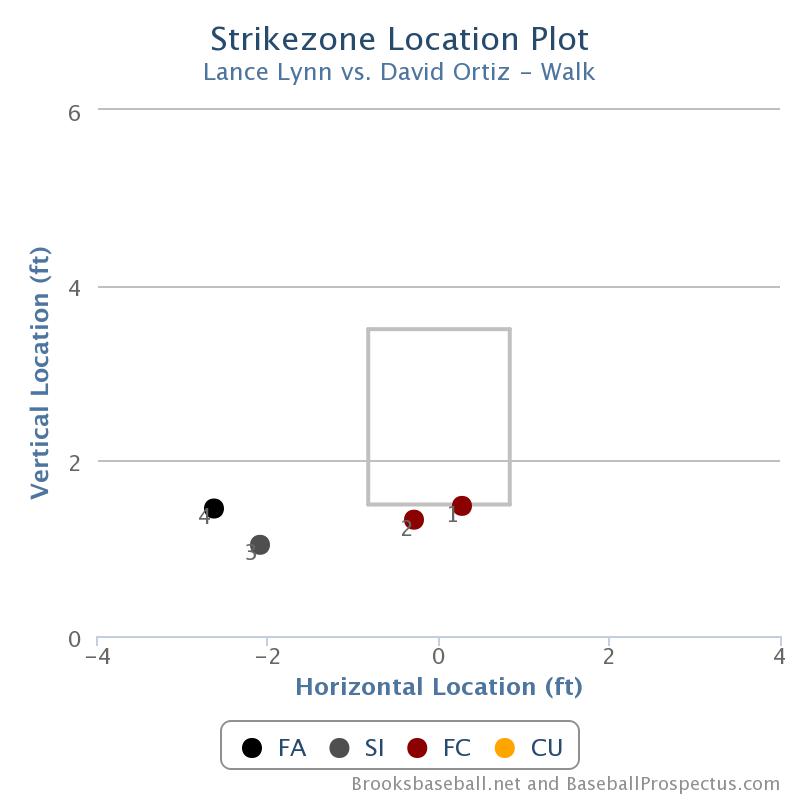 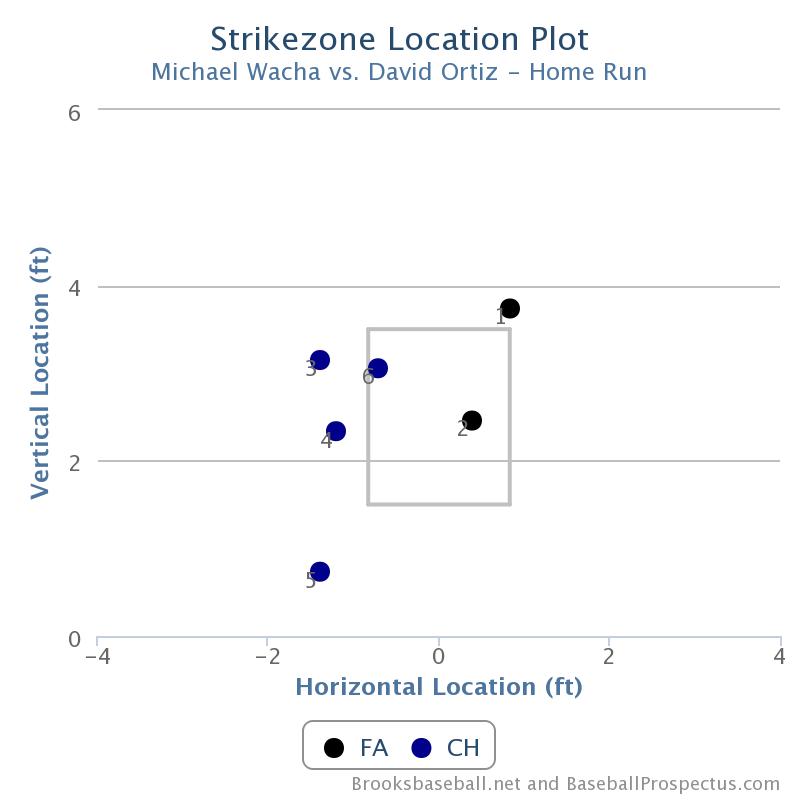 Nothing has worked so far, because nothing has worked so far. In the next two games, the crucial decision for the Cardinals is whether to treat Red Hot David Ortiz as a real thing and refuse to let him beat them; or whether to treat him as the same hitter that thousands of previous plate appearances (and scores of Cardinal-scouted plate appearances) told them he was, and stick to the scouting report and the plan that they came in with. If they do the former, they're likely to beat themselves. If they do the latter, God help 'em.

You need to be logged in to comment. Login or Subscribe
sbnirish77
Isn't it time to go back to Siegrist? Yes, he got burned once but so has everyone else since then.

Matheny has been afraid to bring him in to face Ellsbury or Ortiz and has essentially taken one of his big arms out of play causing a cascade effect of when the starters get pulled and how the rest of the bullpen has been used.
Reply to sbnirish77
BillJohnson
Except that that isn't really what has been happening. Siegrist has appeared in 3 games so far. Only Martinez has more. Overall, Matheny has been just a tad more willing to go to the bullpen in the Series (18 relief appearances in 5 games) than in the regular season (472 relief appearances in 162 games, if I tally it up correctly, and one of those was Rob Johnson who really doesn't count...). Clearly we are still in small-sample-size space, but when one factors in the fact that he doesn't have to use his #% starter (which Miller turned into during September, rightly or wrongly), Matheny's bullpen use has been at least as active as in the regular season, probably a bit more.

The real story of this Series has been: why can't St. Louis score any runs? We're long overdue for a searching look at that question.
Reply to BillJohnson
BillJohnson
#5 starter, not #%, obviously. Wish I we could edit these things for a while after they're posted!
Reply to BillJohnson
sbnirish77
I was specifically talking about Siegrist pitching vs Ortiz.

Most people coming into the series would have thought that Siegrist was the best LH option vs Ortiz. Matheny thought so too as he brought him into game 1 but Ortiz homered.

That small sample result has colored Matheny's use of Siegrist since.

In game 2, Matheny left Martinez in for a 2nd inning to face Ellsbury leading off the 8th

In game 4, Matheny gets criticized for leaving Lynn in too long as Lynn faces Ellsbury again to start off the 6th.

In game 5, Matheny gets criticized for leaving Wainwright in to face Ellsbury.

My point was that after giving up that initial HR to Ortiz, Matheny had had ample opportunities to bring in Siegrist to face Ellsbury or Ortiz in critical situations and he has chosen to roll the dice with someone else.
Reply to sbnirish77