This series has been compelling from the start, but it took until Game Five for it to look like a contest between two of the best teams in baseball. Game Five was the first without an error. It was mercifully free of egregiously bad baserunning, and it didn’t end with a debatable call. With the memory of Dana DeMuth's floating strike zone still fresh, it felt well-officiated behind home plate, aside from this third-inning strike three to Matt Carpenter.

And so it came down to a duel between two talented pitchers. Adam Wainwright, who called his Game One delivery “horrible,” made some “great adjustments” and “executed [his] plan all night long.” Lester, who excelled in Game One, was even more efficient in Game Five, again getting 23 outs and finishing with an almost identical line, but this time throwing 21 fewer pitches.

Because it was so close, we can point to individual pitches that proved pivotal, like the 0-2 curveball that Wainwright left a little up to Dustin Pedroia in the first

or the 1-0 four-seamer Matt Holliday drove out to center in the fourth.

But the most pivotal pitches came in the seventh. By then, Wainwright may have begun to tire. The Cardinals swung at fewer first pitches from Lester, but the Red Sox, as they tend to do, made the pitcher opposing them work harder. “I wanted to attack them today, get them into my pitcher’s counts, keep them out of those deep counts, where they get your pitch count up early,” Wainwright said. And for the most part, he accomplished those goals—just not quite as well as Lester did during the home halves. Cardinals batters saw 3.50 pitches per plate appearance; Red Sox batters saw 3.82. And so through six innings, Lester had thrown only 69 pitches, while Wainwright had thrown 86.

Maybe that made the difference. In the seventh, Wainwright lost a little command. With one out and Xander Bogaerts on first, he got ahead of Stephen Drew 1-2 and then threw three straight curves out of the strike zone, later acknowledging that he’d “spun out of [his] delivery” on the last two. And the next batter, David Ross, put the game away with a ground rule double. A foot to the left, and it would’ve been foul; a foot to the right, and it might have scored two instead of bouncing into the stands.

After Ross’ first at-bat, Gabe Kapler noted that Wainwright had him set up for a curve in his second trip to the plate:

Two fastballs up to Ross. He's set up for curveballs in his next at bat. Waino can go to it and know that Ross' last memory is pic of FB up.

But when Ross singled in his second at-bat, he still hadn’t seen the curve. It wasn’t until that seventh-inning matchup, when Wainwright really needed an out, that he finally broke out the breaking ball. The 1-2 curve missed its target, but it was low enough to work anyway against a hitter who hadn’t seen a similar pitch since Game One. Unfortunately for Wainwright—and despite all the groundwork the right-hander had laid—Ross was ready.

(As for why Wainwright was still in in the seventh—and why he stayed in to allow another run to the left-handed Jacoby Ellsbury, whom he was facing for the fourth time—see my story from Monday about Mike Matheny’s slow hook. I said then that I was starting to sound like a broken record; now my needle is officially stuck.)

The first scary thing about the performance of David Ortiz, who’s hitting .733/.750/1.267 on the series, is that his slash line would have been even better if Carlos Beltran hadn’t robbed him of a homer in Game One. The second scary thing is that the Cardinals have probably pitched him the way they wanted to. Here’s the location plot vs. St. Louis: 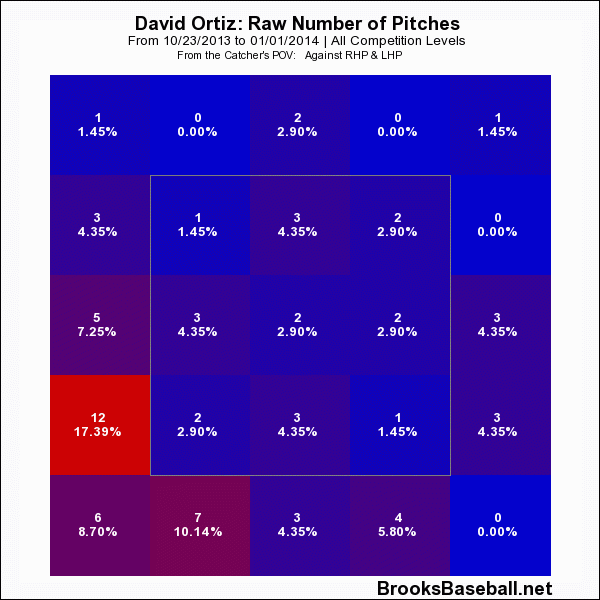 That bright red square where Ortiz has seen the highest concentration of pitches is the same as the one where he saw the highest concentration of pitches during the regular season. It’s low and away, where pitchers can avoid his premium power zone (low and inside) but still hope to earn the outside strike that’s often called on left-handed hitters. So the Cardinals have followed the same strategy employed by Ortiz’ previous opponents; it just hasn’t worked as well for them (not that it’s proved foolproof for anyone).

According to Brooks Baseball, Ortiz has seen about the same distribution of fastballs, breaking balls, and changeups in this series that he did during the regular season. (He’s batting .900 and slugging 1.400 on the hard stuff, and.500/1.500 on off-speed offerings, with only curves and sliders meeting with anything close to success.) He’s swinging about as often as usual—in Game Five, he uncharacteristically offered at the first pitch three out of four times, perhaps figuring that he might not have another chance. But when he’s swung, he’s missed much less often:

To some extent, Ortiz has benefited from perfect placement of his batted balls; his grounder in the eighth inning last night probably would have been fielded if the Cardinals hadn’t been guarding the lines (or if Allen Craig could move), and his infield single in the second probably would have wound up in a middle infielder’s glove if it hadn’t hit Wainwright. And as Sam Miller and I discussed on the podcast today, even if Ortiz was particularly locked in from Games One through Five, his hot hitting won’t necessarily extend to Game Six. If the Cardinals get away from their game plan—either by varying their own timing or position on the rubber when Ortiz is up, as Wainwright did, or by not making a move when a lefty reliever is called for because of small-sample stats—they’re as likely to hurt themselves as they are their new nemesis.

When I said Game Five was the first without an error, I meant the kind decided by the official scorer. Managerial mistakes are another matter. I won’t call John Farrell’s decision not to pinch hit for Lester with one out and men on second and third in the seventh inexplicable, because it’s easily explained: Lester had thrown only 69 pitches and allowed only one run, and he was coming off a 1-2-3 bottom of the sixth. He’s Boston’s best starter, and he throws with his left hand, an advantage against a team that has struggled against southpaws. On top of that, we know that Farrell is understandably wary of going to anyone in his bullpen but Koji Uehara—hence John Lackey's cameo as a setup man—and if he’d removed Lester, he would’ve had to ask his other relievers for four or five outs.

But the fact that we can follow Farrell’s thought process—and that many, if most managers, would have made the same call—doesn’t mean that this wasn’t the worst managerial move we’ve seen since the last time Farrell let a poor-hitting pitcher make an almost automatic out instead of demothballing Mike Napoli. Lester was working through the Cardinal lineup for the third time, so the times-through-the-order penalty was in full effect, and as good as he’d been, succeeding through six isn’t predictive of success in the seventh. Even if Farrell had known that Lester would give him another 1 2/3 scoreless, the difference between that and whatever he would’ve expected his best available reliever to do over the same span couldn’t have equaled the gap in expected scoring between Lester and Napoli with two runners in scoring position. If you want more on this move, Mitchel Lichtman did the math and wrote almost 3,000 words about it, concluding that it cost the Sox roughly three percentage points of win expectancy. That doesn’t sound like a lot, but it’s about as big a bullet in the foot as a manager can insert with a single decision.