Two months ago, I introduced an article dubbed Elevator Action, which was inspired by the tendency for elevated pitches to leave the yard. The concept behind the piece was that it can often be more damaging to miss targets within the strike zone than is to sail pitches out of reach. Pitchers who pound the zone but lack the command to places pitches on its periphery will suffer the consequences.

The greatest weakness of that August article was its sample size, as I merely collected the longest home runs hit on a given day and took a cursory look at the elements that contributed to those drives. In the conclusion, I mentioned the need to dig deeper in order to further substantiate this link between missed targets within the strike zone and the damage inflicted by opposing batters. Now that the regular season is under wraps, we have the opportunity to look back on the 2013 season and see whether the theories of Elevator Action hold up to deeper scrutiny. Under the microscope are, in ascending order, the eight longest home runs hit this season, each of which exceeded 470 feet according to the ESPN Home RunTracker.

Frazier's power spike of 2012 carried over to the first month of the 2013 season, with six homers in his first 21 games. No. 6 was this 470-foot smash to dead center off of the Cubs' Jeff Samardzija, but it was the last time that Frazier would clear the wall until the 11th of June. The 40-game homerless stretch served as a harbinger of suck for the rest of his season, with only a September surge allowing him to clear a .400 slugging percentage for the year.

The Shark had intended this cutter to finish on the low outside corner, with catcher Dioner Navarro setting up at 7 on the strike-zone keypad, at approximately knee height for Frazier. Samardzija failed to execute his location, allowing the pitch to drift up to key no. 4 and catching more of the plate than planned. Watch Navarro's target from release point to contact, and you’ll see how the catcher had to move his glove up and over the plate to receive the pitch. Samardzija had been off-kilter throughout the at-bat, failing to hit any of his spots, and Frazier took advantage.

Derek Holland was in the midst of the best season of his career when he faced Mark Trumbo and the Angels in September, but a lack of pitch command got Holland's day off to a rocky start. Trumbo wasted no time, launching the first pitch he saw from Holland into the rock pile located just to the left of center field to give the Halos a 3-0 lead.

A.J. Pierzynski had called for a fastball down and in to start the at-bat, setting up behind the no. 9 on the keypad, but Holland elevated the pitch right into Trumbo's wheelhouse on the no. 6. The blast served as a reminder of not only Trumbo's ability to hit good heat (the pitch was clocked at 95 mph), but also his ownership over the inner half of the plate. 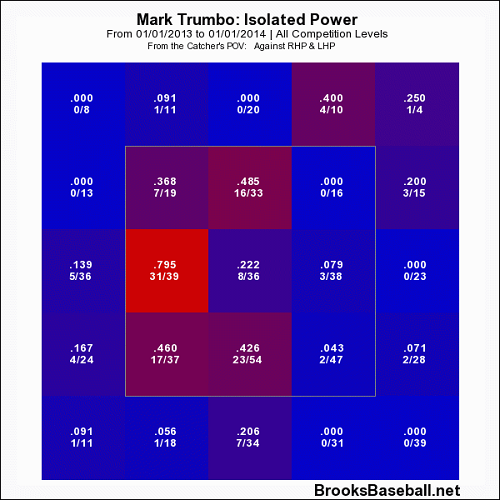 Southpaw Patrick Corbin absolutely dominated left-handed batters in his breakout season, but Jay Bruce got the best of him in the second inning of their match-up on June 22nd. The Arizona outfielders gave up early on Bruce's no-doubter; its final destination in straightaway center has been a common thread thus far on the list, an indicator of the relationship between exit velocity and trajectory of pitches that are perfectly barreled. Corbin leaned on his slider to kill lefties this season, but he offered Bruce three consecutive fastballs in this plate appearance. The Reds outfielder fouled off the first two pitches, but the third offering was timed just right. The rocket served as yet another example of the dangers inherent in missing targets up in the zone, as a pitch that was intended to paint the lower shelf ended up riding the Bruce beltway out of town.

The 472-foot homer was the first of two fence-clearing shots on the day for Bruce, who took Heath Bell deep in the top of the ninth inning on yet another pitch that was located higher than intended.

The two-run home run traveled an impressive 442 feet and put the Reds ahead 3-2, but the Diamondbacks would score twice in the bottom of the frame off of Aroldis Chapman, walking off with the win without the Red Dragon having recorded a single out.

Mark Buehrle was in the middle of a brutal stretch when he faced Boston at the beginning of May, surrendering eight homers over the course of three games. Mike Napoli took advantage in the fourth inning with the second of three homers that Buehrle served up on the day, and the next batter, Daniel Nava, finished the job by going back-to-back with Napoli.

The long bomb stands out among this list of the season's deepest drives due to the fact that the pitch was decidedly not elevated. Catcher J.P. Arencibia set up outside the no. 7 of the strike zone, and though Buehrle's offering drifted back over the middle plate, he was at least able to hit his vertical location at the bottom of the zone. Napoli just dropped the hammer on the hanging changeup, and Buehrle paid the price.

Similar to Bruce, Napoli would clear the wall twice in the game that featured his deepest blast of the season. Also like Bruce, Napoli's second homer was anything but a cheap shot—in fact, the 467-foot distance of Napoli's seventh-inning knock off of Esmil Rogers was good for his second-longest of the season, and was tied for 10th on the list of longest home runs hit in the majors in 2013.

The conditions of Napoli's second home run of the day were more typical when considering the other homers on this list, as he took advantage of an elevated fastball from Rogers that made it easier for Napoli to drive the baseball out of the park, though this one was unique in that Napoli had the green light on a 3-0 count. Both of Napoli's homers also followed the trend of the day by exiting via the center-field jet stream.

Rizzo had a power explosion in the season's first month, and his rainy-day bomb off of Alexi Ogando in interleague play was one of eight homers that Rizzo tallied in April, including the first of three that he would hit over a span of four days. The power fizzled as the weather warmed, and the Cubbie first baseman hit just seven homers over the next three months of the year, slugging under .385 in each month from June through the end of the season.

True to form, Rizzo capitalized on an Ogando fastball that was badly under-rotated in a favorable hitter's count, resulting in a pitch that missed high of its intended target. The 91-mph offering ended up in an ideal location for Rizzo to produce the loft and backspin necessary to earn a spot on the list of this season's longest home runs.

Trumbo makes his second appearance on this list, having hit two of the seven longest home runs of the season. The second-inning blast off of Dan Straily was yanked left of center field into Raiders ticket territory, where none of the fewer than 12000 fans in attendance was within reach of a souvenir, giving the Angels a temporary 2-0 lead. The hit would have repercussions for the A's that were felt all season, as this contest would eventually go 19 innings before the final out was registered, and would be the last time that Brett Anderson (who came in for five-plus frames of extra-inning relief after being scratched from that day's start due to an ankle injury) would pitch in the majors for four months.

Trumbo took advantage of a Dan Straily fastball—the fourth heater in five pitches of the at-bat—that was placed in nearly the exact same location as the 471-foot homer that Trumbo hit off Derek Holland later in the year. As the aforementioned heat map demonstrated, the no. 6 spot on the keypad is Trumbo's happy zone, and opposing pitchers should take note when facing him in 2014. Straily was aiming below the no. 8, but once again the plight of elevated fastballs rears its ugly head.

Nothing that Hunter Pence does on a baseball field follows convention, so we should not be surprised that his appearance on this list comes jam-packed with caveats. That’s not to say that Pence is not worthy, as he hit three home runs this season that placed in the top 30 for true distance, but the peripheral circumstances of his big hit are unique. Aside from getting a potential boost from the Denver altitude, Pence hit his home run in truly unusual circumstances—specifically, he hit a pitch that was nowhere near the plate, turning on an inside pitch that might have hit Shane Victorino if the Red Sox had been in town.

Pence turned viciously on the inside fastball, and his shot is the only homer on this list that was clearly pulled anywhere near the vicinity of a foul pole. Perhaps the only way to hit a ball that far on a pitch that is located so far inside is to yank it down the line, and rookie Chad Bettis learned the hard way that there are exceptions to every rule—in this case, the one that says that missing your targets outside the zone is generally less harmful that missing inside the zone.

The moonshot that Evan Gattis hit off of Cole Hamels was the longest poke of the 2013 season by 10 feet, which is pretty incredible when one considers how tightly the top home run distances are clustered. Gattis had some steep peaks and valleys in 2013, and he was in peak-mode for the first couple weeks of September. This first-inning trot accounted for the only run off of Hamels until the seventh inning, when Gattis did more yardwork with a solo shot that traveled a relatively modest 408 feet, tying the score at two runs apiece. Gattis is the third player on this list (out of seven total) whose long-distance call was part of a multi-homer day, a fact that adds some fuel to the fire behind the perception that professional athletes can have days where their game is elevated beyond the norm.

The monstrous home run by Gattis is not only the deepest drive of the year, but also the most glaring example of the common ingredients that result in big blasts. Phillie catcher Erik Kratz was set up with a very low target, below the zone and under the no. 8 of the keypad, but Hamels badly under-rotated his offering and the pitch sailed two feet above its intended location. Gattis was locked in on a fastball in a hitter's count, and Hamels obliged. Finally, the near-perfect contact resulted in a rocket that was launched to straightaway center field, following the script laid out throughout this list of the farthest-hit baseballs of the 2013 season.