Throughout the World Series, we'll be providing two recaps of each game, one with a focus on the winner and the other devoting a longer look to the loser. This is the Cardinals entry for Game One. The Red Sox entry is here.

In retrospect, this sort of set the tone for Game One from the Cardinals’ perspective:

That’s the 6’7” Adam Wainwright making his way to the mound in the first and bumping his head on the roof of the visiting dugout at Fenway, whose home team in the ballpark's long-ago inaugural season topped out at 6’2”. Things got worse for Wainwright from there.

“If you like defense, then this isn’t the series for you,” R.J. Anderson wrote in his World Series preview. As R.J. noted, neither the Cardinals nor the Red Sox placed particularly well on the various defensive leaderboards this season, though St. Louis was worse, ranking 21st in defensive efficiency, 26th in park-adjusted defensive efficiency, 27th in team UZR, and 22nd in team DRS. Boston wasn’t so much better that the team’s glovework constituted a massive advantage, but if you wanted to find a weakness in a matchup between two of baseball’s best teams, the Cardinals’ lack of leather was it.

As the Red Sox ran up the score on Wednesday, Tim McCarver and Joe Buck kept clucking about how atypical it was for a Cardinals team to look so sloppy. In a sense, they were right: the Cardinals committed three errors in the game, which was out of character for them (only the Yankees, Rays, and Orioles committed fewer errors in 2013). But errors aren’t a great proxy for overall defensive performance; the Cardinals' shortcomings in the field have more to do with the balls they don't touch. It seems like defensive inadequacy should be inconsistent with the Cardinal Way, but converting batted balls into outs is one aspect of the game at which St. Louis doesn’t excel.

Pete Kozma committing two of the errors last night was odd, in that he’s the one Cardinal who’s in the lineup solely because of his glove. Aside from Yadier Molina, no one on the team was less likely to flub two plays, the first of which potentially cost the Cardinals a double play that would have ended in an inning in which the Sox went on to score three runs.

Wainwright—for what it’s worth, a Gold Glove winner in 2009—hurt himself by not attempting to catch a Stephen Drew popup that dropped in front of the mound to start the second, and David Freese allowed Drew to score on a Dustin Pedroia grounder that got under his glove.

Defensive struggles from Freese, at least, made sense; the third baseman also contributed to Boston’s two-run seventh with a two-out throwing error that put Pedroia on first and gave David Ortiz a chance to go deep. Only four of the eight runs allowed by the St. Louis staff were earned.

As I watched the Cardinals fall further and further behind, I kept making mental comparisons to NLCS Game Six, in which Clayton Kershaw wasn’t quite as sharp as usual but the final score was less a reflection of his own failings than it was a product of bad defense and Murphy’s Law batted-ball placement. I made the case in my recap of that game that it very easily could’ve been a nailbiter instead of a blowout, and one could say the same about Wainwright’s Game One start (although this time, it was Jon Lester in the “unhittable opponent” role Michael Wacha played against the Dodgers).

The difference is that in the Cardinals’ case, one could also point to a play that made things much better than they could’ve been:

That’s the second extra-base hit Beltran has robbed in October; this one saved three runs. When he was removed from the game with what appeared to be a bruised rib, it looked like another callback to the NLCS. But in Beltran’s case, nothing is broken, so this isn’t Hanley Ramirez redux.

St. Louis got off to a lousy start in this series, but this wasn’t one we should have counted on the Cardinals to win. Only four teams—the Mariners, Marlins, White Sox, and Mets—had a lower OPS against left-handed pitchers this season than their .672 mark, so a matchup with Lester at Fenway was the game in this series in which their offense was most likely to struggle. Yes, the Cardinals looked a little lost along the way, and the score was more lopsided than one would’ve expected. But those extra Red Sox runs don’t roll over to today. 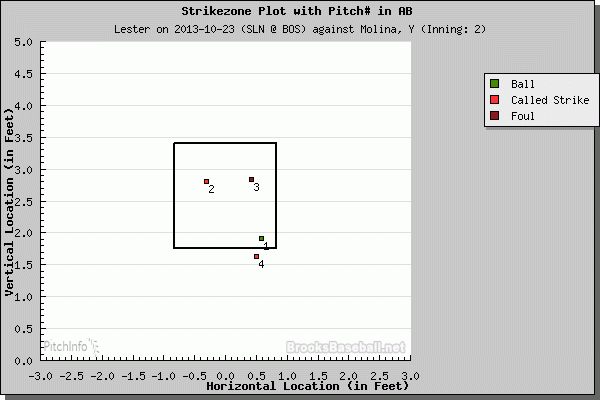 You need to be logged in to comment. Login or Subscribe
apilgrim
The glossophobia commercial is driving me nuts. But there is all kinds of parody potential in that one ("Google, what is Kleptomania?"). The Silverado commercial is just bad. I think the farmer paean from last year (or the Super Bowl) was better.
Reply to apilgrim
NYYanks826
"How do I ask out girls?"
Reply to NYYanks826
matrueblood
That one's bad, too. Because really, the kid would ask what to call his fear of public speaking, right? Not what the word means, because he knows that's what he's feeling.
Reply to matrueblood
terryspen
I will never understand why pitchers don't catch pop flies that are hit right to them, something most of us who aren't big leaguers mastered by 12. Wainwright had to take two steps to catch that ball and backed off because he thought a catcher running 55 feet was a better option. Through high school, pitchers catch pop ups - then suddenly stop in colleges and the pros.

Some of my friends last night were arguing about pitchers not being athletic enough. We are talking about catching a routine pop fly, not running down a ball in the gap. It ain't that hard. Most botched pop ups on the infield happen because the guy who was closest -- the pitcher -- moved out of the way so four guys have to run to a spot and then get clear which one will take it.

I can see it during a day game because pitchers don't wear shades, but otherwise just catch the ball.
Reply to terryspen
lopkhan00
So now you want them to add glancing at their watches to the mix? ;-)
Reply to lopkhan00
whjohnson37
Infielders are taught that there is an order in catching popups where some positions have priority over others. That order is SS,2B,3B,1B,C,P. Pitchers expect to be called off by someone else because they are coached to get out of the way and let another fielder have it.

That being said, Waino put his hands up and called off Molina so he was at fault.
Reply to whjohnson37
terryspen
I realize there is a priority list, but that doesn't mean the shortstop calls for a pop fly hit right to the third baseman, even if he can get there. The only player that happens with is the pitcher and it makes no sense most of the time. If the ball is coming right to him, he should catch it. Again, it ain't that hard and doing anything else complicates that matter.
Reply to terryspen
gandriole
What about the Dennis Rodman pistachio commercial?
Reply to gandriole
gjhardy
Regarding the Silverado commercial, when my sons and I heard it, the message to us was that Chevy's cab was quiet, but not as quiet as Toyota's, or any other pickup "in its class" other than Ram and Ford. And really, shouldn't it read either "Dodge and Ford," or "Ram and F-150," so that we are comparing companies or specific vehicles?

Don Draper must be unhappy.
Reply to gjhardy
matrueblood
I think I can speak to that part. Ford has more than one truck in the class, but Dodge brands all of its pickups Ram. I could be wrong, but I think that's the case.
Reply to matrueblood
BurrRutledge
I'm glad there are others bothered by that dang quietest truck commercial.
Reply to BurrRutledge