In the end, they all became true Tigers.

Jose Veras was good enough in his limited closing opportunities on a terrible team to write his ticket out of Houston, and hadn’t allowed a home run to a right-handed hitter since joining the Tigers. In the end, he was a member of the Tigers bullpen, and this is what the Tigers bullpen does.

Then there was Jose Iglesias, defensive wonder. He’d been a staple of the highlight shows as recently as one game ago. But in the end, he was a body playing defense for the Tigers and this is what the Tigers defense does.

Even if some new names were involved, the Tigers were let down by exactly what we always knew could hold them back as the Red Sox finished them off in Game 6 of the ALCS. Shane Victorino’s righty-on-righty grand slam on an 0-2 pitch was the deciding blow in a 5-2 game, but as the Red Sox party on to the World Series, Detroit will realize that it got to that point of elimination thanks to some familiar weaknesses.

The bullpen was about as anticipated, but if the rest of the problems can be summarized, it would go like this: The Tigers were terrible from the moment the ball hit the bat.

They were statistically by far the worst baserunning team in baseball, and that came back to kill them in their only productive inning when Prince Fielder’s beached whale routine kept them from adding on when the Red Sox could barely get one out on their own.

The next inning, Austin Jackson was picked off first base, watching from the dugout as the next two hitters reached base and the Tigers couldn’t plate an insurance run.

The Tigers were the fourth-worst defensive team in baseball as well, and we’ve seen examples of that all week, culminating in the seventh inning of Game 6.

There will be plenty of time to discuss the Red Sox and how they match up with the Cardinals in a rematch of the 1946, 1967, and 2004 World Series. They are not free of questions after tonight.

In particular, there’s Clay Buchholz, who has struggled as the games get later. Pitching worse the third time through the order is extremely common, but Buchholz wasn’t like that all year. He gave up four runs in the sixth and final inning of his Game 2 start, and he seemed exhausted in the sixth Saturday night. Buchholz, who averages 92.7 mph on his fastball, threw four four-seamers in that inning: 89, 89, 89, 88, and he was done.

Buchholz has averaged 95 pitches in his six starts after coming back from the disabled list. On Saturday, he threw only 85, and he sputtered to that point. One has to wonder whether Boston can piggyback him with Ryan Dempster and maybe have him throw only 60 pitches in Game 3 (though Game 4 might not be the worst idea).

Then there’s how to get Xander Bogaerts to take the place of Will Middlebrooks and Stephen Drew in the lineup. Bogaerts had three doubles and three walks in nine plate appearances this series, while the left-side regulars went a combined 2-for-30. And his take of an oh-so-close pitch in the seventh was among the plays that set up Victorino; that one put two men on with one out. As for whether the call was correct or not, well…see pitch six. 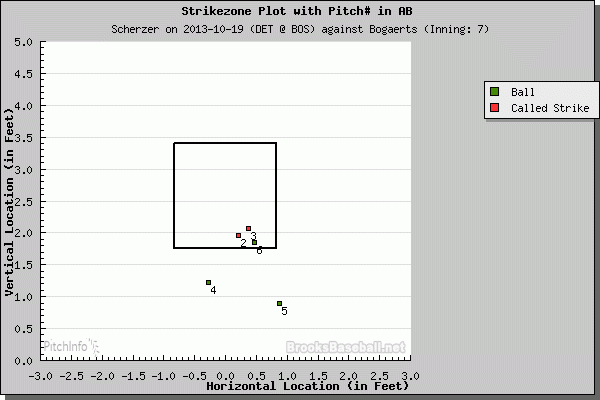 Bogaerts said in the moments just after the game that he had already gone and looked at the pitch on video. He called it in perfect ballplayer-speak “a good pitch.”

That was Scherzer’s last batter. The rest was all the Tigers being the Tigers.

The Iglesias misplay came next, and not only was it a missed opportunity to get one out, but Jim Leyland thinks it might have been a chance to get two.

“I think we could have,” Leyland said. “Probably could have turned two even though Ellsbury runs good. But that’s part of the game.”

It’s a part of the game he’s seen way too much, as was what happened next to an 0-2 curveball that effectively sunk them.

The Tigers’ strengths are maybe as strong as those of any other team. Their starting pitching is the best in baseball and proved it in defeat. They strike batters out to take some of the burden off that defense. They hit balls over the fence and stay off the bases.

But eventually the ball goes into play. And when it was out there on the diamond—no matter which team was running the bases and which team was on defense—the 2013 Tigers were always outclassed.

You need to be logged in to comment. Login or Subscribe
DetroitDale
In addition to the base running and defense blunders, there was the usual round of tactical blunders. Pulling peralta, one of the few non slumping hitters for his surrogate son down Kelly with a narrow one run lead was indefensible, but even that mistake didn't hurt because his bullpen mishandling pit the game out of reach before kelly had to come to the plate for his automatic out.

He followed the same pattern that failed in the first game sherzer started, but this time it was even less defensible. This time smyly didn't walk the lefty, he got the double play ball they needed. Its not his fault Iggy booted it ( good thing they sacrificed defense to get his glove in there. What Levine said about veras applies here too) smyly is more than a loogy' he's a future starter, he could have stayed and been as likely to get victorino as versa, then he'd have a lefty against big papi, plus he might be looking at extra innings so maybe you need a guy who can go multiple innings, but noooo he's gotta follow righty lefty to the letter no matter how often it doesn't work.

The games base running blunders can't be attributed to lack of speed or tactical blunders, but general sloppiness and poor discipline, and when that affects more than one player, you have to look at the manager too.

But the truly poor managerial blunder that sunk them was in the regular season, when instead of resting might till he got healthy, he let him stay in for a futile run at another triple crown and a feeble run in the playoffs. Now yet again, as with the cards in 06, the twins in 09, the rangers in 11 and the giants last year, we loose to a less talented opponent because Leyland handicaps his team. And this years hurts because everything lined up for us this year. The rotation was perfect the lineup was set, we got home field the yeas. Someone else took out the dodgers for us, and there wouldn't be a long break between series. Three of then four games lost were winnable. All set up but lost because we have to let Leyland rest on his laurels because he's such a nice guy. Next year is probably the last year in this window before age, high payroll and lack of prospects catch up to them. It would be a shame to waste itby bringing Leyland back.
Reply to DetroitDale
rawagman
I can agree with most of what you said except for "we loose (sic) to a less talented opponent". While the Red Sox do not have a hitter the caliber of Miguel Cabrera (newsflash - no one does), man for man, there is no reason to believe the Sox were any less talented than the Tigers and there are several reasons to believe that they are, in fact, more talented. Relief pitching, fielding and baserunning chief among them.
Reply to rawagman
Howler37
The baserunning is more of the bases coach than perhaps the manager, in my view. Last year, Lamont got reamed because he sent Prince when he shouldn't have. This year, Brookie got the call, and there were a number of times where his sending the runner raised eyebrows. Not stopping Miggy in the first inning in Game 5 is the same as Lamont sending Prince last year.
Reply to Howler37
DetroitDale
that's true as far as it goes, however, as you point out, Lamont got reamed for the same thing that Brookens did this year (i.e. sending guys he shouldn't have) both guys were decidedly overaggressive in sending guys and cost several runs and killed many rallies because of it. Now it could just be two guys with the same (IMO wrong) philosophy, or it could be two guys getting their marching orders from the manager.

As I write this, Jim Leyland is announcing his retirement. As such I need to thank him for the class with which he conducted himself and let the team throughout the year, and while I have acknowledged that he was part of the reason they never made it to the series, I do have to acknowledge that he left the team better than he found it, and to thank him for recognizing when it's time to step down.
Reply to DetroitDale
dhumphrey
I believe the prospectus forecasts for each of the 6 games of this series were incorrect in terms of predicted outcome ... it's an impossible feat to predict a single baseball game, but it's just as hard (if not harder) to pick incorrectly six times in a row as it is to pick correctly six times in a row!
Reply to dhumphrey
walrus0909
Actually, BP got Games 2, 4 and 6 right. Links below. And given that the individual game odds were ~50% each time, it's unusual, but not crazy unlikely, to get all six wrong anyway. Close to calling 6 straight coin tosses wrong.

Neither here nor there, just goes to show how futile it is to try to call individual postseason games.
Reply to dhumphrey
aikman72
I wouldn't call the Red Sox less talented. They were the better team.
Reply to aikman72
andrews
It's the playoffs, the unpalatable fact is to really decide who the best was would take about a 999 game series, not 7, something that clearly can never happen.
The Red Sox won a tight series, good luck to them.
Reply to andrews