There are worse places to be than needing to win starts by Max Scherzer and Justin Verlander. But, as they say, the Red Sox pitchers live in mansions, too.

The Tigers are on the ropes because of one inning. In five innings, Anibal Sanchez allowed one run, on five hits, with five strikeouts and no walks. Five-sixths of a great outing. In one inning, though, he allowed three runs on four hits. One bad inning, a 4-3 loss, and a trip to Boston with no margin left. So what led to the one bad inning?

First batter: Mike Napoli
If you buy the idea that pitchers are constantly in a state of finding and losing their command of certain pitches, you might have spotted this inning coming from the first pitch:

That’s a slider, inside, thigh high. Sanchez threw six sliders there all season, and only 34 sliders that missed on that side of the plate all season. It's a brutal pitch, and the only thing that kept it from being a worse outcome is that is was so brutal that Napoli wouldn't swing. The next pitch was also a slider, 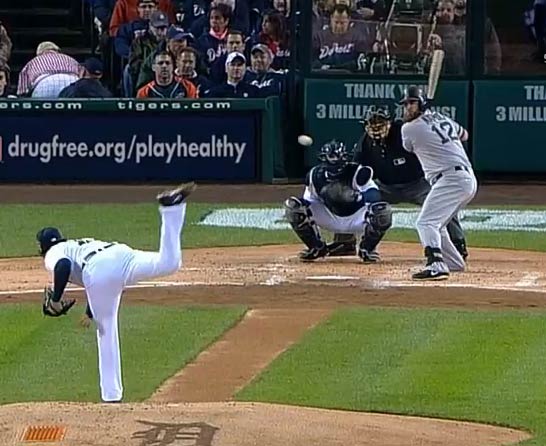 and this one isn't much better. Sanchez gets a called strike, but it's clearly a mistake; Sanchez threw only 15 pitches in that square all season. No slider he threw all night had less drop. After a wild fastball and a changeup that just missed, Sanchez was behind 3-1 and threw a fastball down the middle–technically, 6/10ths of an inch from perfectly bisecting the strike zone. It's not that he missed his target by all that much, Second batter: Jonny Gomes
Gomes hit a routine groundball to Miguel Cabrera, who booted it. Can't blame that one on Sanchez, though it's at least worth noting that he attempted to strike Gomes out on a slider and left it up, about the same spot vertically as the ball Napoli hit out. It was on the outside part of the plate, but not off the plate, and it had about two inches less vertical movement than Sanchez typically gets on his slider.

Gomes hit it right at a defender, but he could have just as easily hit it eight feet to Cabrera's left for a clean single and we wouldn't necessarily be excusing Sanchez for the baserunner. The story of the inning continues to be Sanchez failing to throw his slider anywhere near where he wants to, or with the movement it typically has.

Third batter: Stephen Drew
Drew strikes out, after giving away one strike on an 0-1 sacrifice bunt attempt. Sanchez doesn't throw a breaking ball in the at-bat.

Fourth batter: Xander Bogaerts
Sanchez gets Bogaerts to look terrible on a slider and then gives up a double on a slider

which Tim McCarver calls a hanger. It looks a bit worse because Bogaerts hits it in front of the plate, before it has had a chance to continue its downward trajectory–it's actually lower than the one Bogaerts swung at a pitch earlier. But it has only half the horizontal break of the previous one, and lingers middle-in for Bogaerts to reach. Watch Avila's glove, following the trajectory of the pitch:

Fifth batter: David Ross
And now, without a slider he can reliably throw to right-handers, Sanchez throws a 1-0 changeup to David Ross.

And Ross doubles against the left-field wall. Over the course of five batters, Sanchez threw six sliders. One was sharp. The others were high, inside, flat, straight, or a combination of the four. The five put him in a dangerous count to a dangerous hitter, resulting in a home run; kept him from punching out a batter who strikes out about 30 percent of the time against right-handed pitchers; cost him a double; and *might* have led him, once he lost confidence in the pitch, to throw a rare inside changeup to a right-handed power hitter, resulting in another double. The Red Sox, meanwhile, didn't miss a pitch. That's how fast one bad inning can happen, and it's why the Tigers have no margin for error left.

Thanks to Koji Uehara's five-out effort, there have now been more four-out-or-more saves this postseason than in any of the previous five postseasons but one. And still an entire World Series to go plus at least two elimination games to go. From 1998 to 2001 there were an average of seven per postseason, easily the long-saveiest era of our recent history. But the crazy thing about those four years is that, of the 28 total, 18 were by Mariano Rivera. There's no Mariano Rivera this year. Uehara has three, Craig Kimbrel had one, and Joaquin Benoit has one (and attempted another). Trevor Rosenthal doesn't have one but did pitch two innings in a tie game. It's too early to say, but I'm still optimistic that, for all the complaining we do about closers being used improperly, we might have already taken a few steps into the golden age of two-inning saves.

You need to be logged in to comment. Login or Subscribe
DetroitDale
I'm actually surprised the two inning save took this long. The argument for it is similar to the argument for bringing a starter in relief or to start on short rest. It's the playoffs, stakes are never higher and if you lose you have the whole offseason to rest up.

And yes, I am avoiding talking about the game or the next two because I'm out of clever ways to say " it looks grim but with those starters you can't count them out."
Reply to DetroitDale