Matt Holliday hit a long home run on Tuesday night. According to Home Run Tracker, it traveled 423 feet, which made it the fourth-longest homer hit since the postseason started.

It looked a lot longer. Not only because the broadcast made it tough to tell when (or if) it came down, but because it had been so long since the last dinger these two teams had produced that the notion of multiple runs generated by a single swing seemed strange. (As TBS reported, no series had gone three games without a homer since the 1948 Fall Classic.) The inning snapped a 16-frame scoreless streak for St. Louis, almost as long as the 22-inning drought the Dodgers ended in Game Four.

As R.J. Anderson noted last season, teams generally try to pitch Holliday inside, which is where A.J. Ellis set up. Ricky Nolasco missed up and out over the inner third of the plate; the red ellipse superimposed on this image illustrates where Ellis’ glove was when Nolasco was about to deliver the ball. 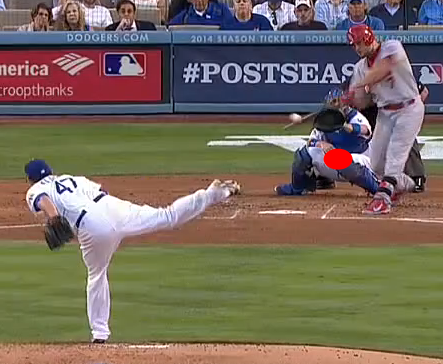 Nolasco got Holliday to pop out on an almost identical pitch in his first at-bat, a sinker at roughly the same speed just a little less low and inside: 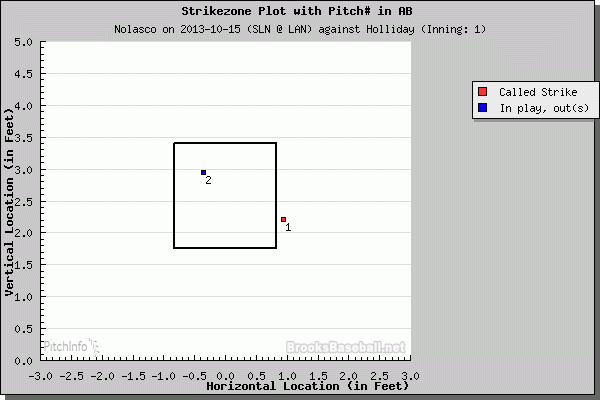 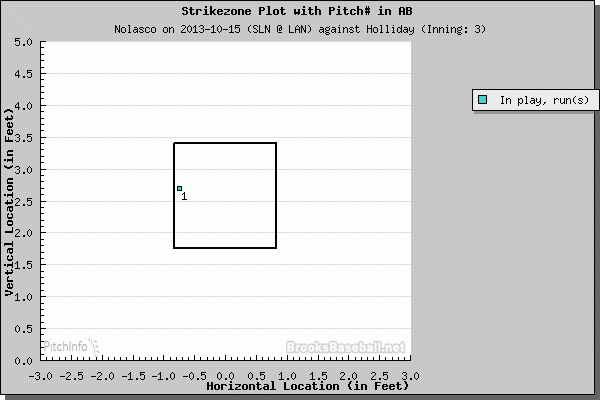 But according to Ellis, when Holliday returned to the plate he was “almost looking for” something in the same place. “In hindsight, we should have done something a little different on the first pitch,” Ellis admitted.

In my Game Three recap, I wrote, “If Nolasco and [Lance] Lynn do go head to head, we might finally see some runs scored.” And we did, but only by the standards of a low-scoring series in a pitching-first postseason. “This is a top-step-of-the-dugout kind of game,” one of the announcers said early, echoing Ernie Johnson’s “top-step night” comment from Game One. I’ll save TBS some time: let’s just call it a top-step series.

You need to be logged in to comment. Login or Subscribe
buckgunn
Nice job! One very small note: Holliday's blast did not end the Cards' scoreless streak - Matt Carpenter had already ended it with a run-scoring double.
Reply to buckgunn