The Cardinals offense woke up just enough to give Lance Lynn the support he needed and took a commanding 3-1 series lead, putting the Dodgers backs to the wall in an elimination game today. Here is a look at the PECOTA odds and projected starting lineups for today’s game.

PECOTA loves the Dodgers side of the Greinke/Kelly matchup as much as the Twitter-verse loves an exaggerated Puig bat flip. Based on Greinke’s longer track record (and success) this is certainly understandable, but Kelly did go toe-to-toe with the more seasoned hurler for six innings before giving way to the bullpen in Game One’s extra-inning victory last Friday.

This series is a preview writer’s dream insofar as the line-ups have been extremely predictable and static. With the exception of game time decisions due to Ethier and Ramirez’s injuries, the Dodgers have been trotting the same players out there night after night. Ramirez looked incredibly hobbled last night, and is a game time decision. I’ve inserted Punto in the line-up for now, but given that it’s an elimination game, Ramirez could very well talk his way into the line-up. The Cardinals put Daniel Descalso in at shortstop in Game 4, but I suspect Kozma will be back given his superior range and Kelly’s heavy groundball tendencies.

As noted above, Kelly and Greinke both went toe to toe in the series’ initial contest. The Dodgers will be relying heavily on Greinke to provide seven or eight strong innings, whereas the Cardinals typically have asked for 5-6 solid innings out of Kelly before giving way to the bullpen. Fortunately for St. Louis, Mike Matheny has been able to mix and match with a strong bullpen, which might not give L.A. the supreme advantage PECOTA is foretelling.

Despite his terrific success in the second half of the regular season, Kelly continues to get overlooked next to Adam Wainwright and in comparison to the next wave of up-and-coming St. Louis pitchers like Carlos Martinez and Trevor Rosenthal, but his strong numbers since joining the Cards rotation are no fluke. 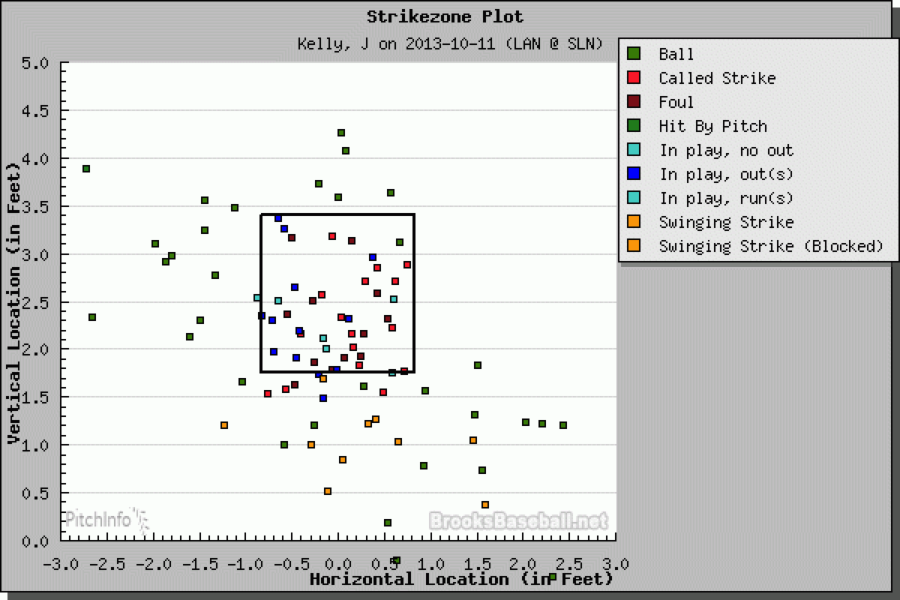 Check out those orange squares at the bottom of the Brooks Baseball strike zone plot from Kelly’s Game One performance. Kelly got the Dodgers to swing and miss at 10 balls out of the zone. His sinker is fast and when it’s working has an extremely sharp bite that makes it hard to pick up. He mixes in enough of a slider/curve/changeup combo that hitters can’t simply sit on the sinker and hope for either a cheap walk or a sinker that stays flat.

This wasn’t a one game anomaly either. Kelly has been consistently touching 94 mph or higher since being inserted into the Cardinals rotation in early July. His 2.32 ERA in his last 14 regular season starts is due somewhat to his defense, but Kelly keeps the ball in the park. His only multi-homer game as a starter was against the Marlins on July 6. Kelly’s ground-ball tendencies will also minimize the adventures that Jon Jay and—to a lesser extent—Carlos Beltran have provided on defense throughout the series.

The Dodgers decision to pitch Ricky Nolasco in Game Four leaves Game Five in Greinke’s hands almost entirely. Obviously if the wheels come off for Greinke early, Edinson Volquez might come in to attempt and mitigate the damage, but this is likely going to be Greinke’s game to win or lose even though it is an elimination game for L.A. Don’t expect a quick hook if Greinke gives up a run or two early.

TBS has been leaning excessively on the term shutdown inning. This is silly mythology but the reality is that Greinke has been a shutdown pitcher for the Dodgers this year, particularly down the stretch. Including the postseason, he has allowed two runs or fewer in 17 of his last 18 starts. Unfortunately for Los Angeles, while the club was 13-3 during this run in the regular season, they are 0-2 in the postseason despite Greinke’s strong efforts.

If the Dodgers have an ace in the hole, it comes in the form of the additional home field advantage of Greinke. Both of those Greinke postseason starts mentioned above came on the road. Greinke had a 2.11 ERA at Dodger Stadium compared to a 3.21 ERA on the road this year.

I have been reluctant to include match-up data due to the fact that it is the worst of the worst when it comes to small sample sizes. For example, Matt Holliday (6-for-20, 2 HR), Yadier Molina (5-for-17), and Jon Jay (6-for-16) have all fared well against Greinke during the regular season throughout their careers. However, in 2013 Holliday (1-for-9) and Jay (1-for-9) haven’t done well against Greinke at all. This is where match-up data fails. It’s far less likely that Greinke “learned” something and far more likely that the small sample size demons are at work.

The advantage in the game goes to Greinke, but the Dodgers are going to have to find a way to display patience against Kelly’s sinker and get Greinke some runs. If the game goes to the bullpens, the Cardinals appear to have a pretty strong advantage. Kenley Jansen is arguably as good or better than any St. Louis reliever, but pitcher for pitcher the Dodgers don’t match up well if it comes to that. If this game is a rerun of Game One and goes extras, the Cardinals might very well be headed back to the Fall Classic for another shot at a title.