That answers the only question that matters. The Red Sox have won more games and the Red Sox have the edge in the series. But turning to questions that only sort of matter, there’s this: Are the Red Sox hitters in a slump? Or have the Tigers starters just been incredible?

Ben and I talked about this, or tried to, on Effectively Wild this week, but we didn’t really know how to answer the question of credit. What follows is an attempt to at least poke at it, without concluding anything.

First, let’s revisit something a pitcher once told me: the catcher’s target matters only for fastballs because, for the most part, the secondary pitches are thrown to about the same target every time. Not exactly, of course. But the point of most secondary pitches is to look like a hittable fastball, induce a swing, and then move out of the zone. Sliders should end up in the same spot; changeups should end up in the same spot; etc. For instance, Max Scherzer’s slider usually goes to the same place: 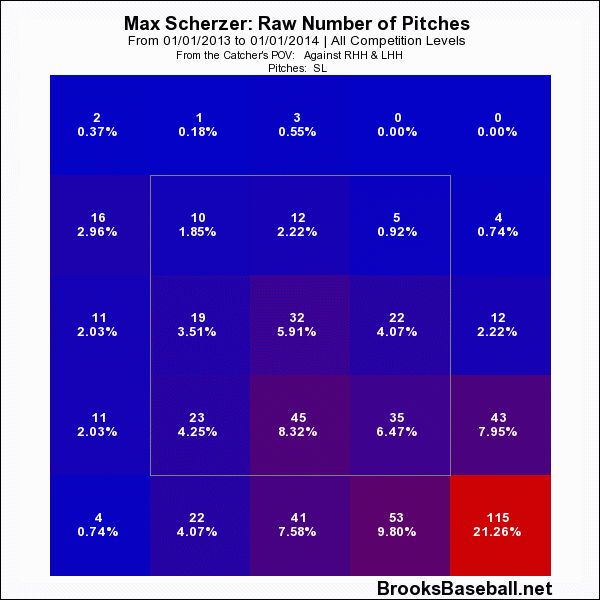 We’ll declare the intended target to be the bottom-right square. To give him a bit more leeway, we'll tack on the three adjoining squares, and call those four squares his target. He hits that target 45 percent of the time, usually. We can suppose that pitches that don’t go to that place are basically mistakes, with the occasional get-it-over attempt to steal a strike mixed in. In Scherzer’s case, there were 17 sliders thrown against the Red Sox in Game 2. Nine of them were in that sweet spot. The other eight we'll call mistakes. 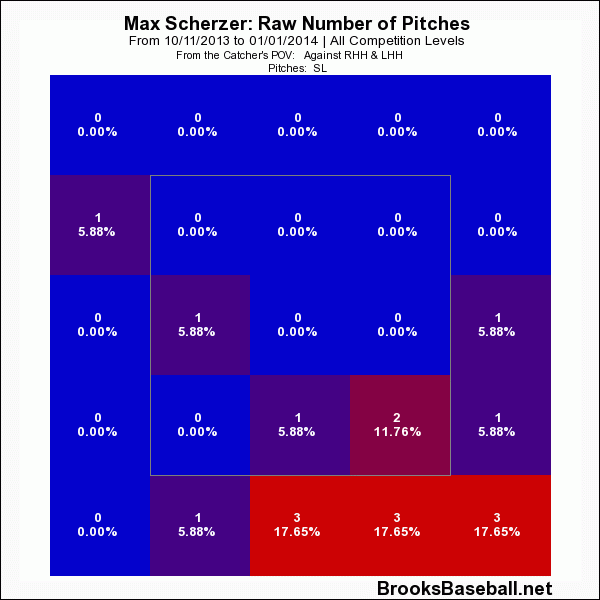 We’ll ignore the nine. Scherzer did what he wanted to, and we can’t blame the Red Sox for anything they failed to do on those nine pitches. They had eight chances to do damage, either by taking pitches for balls or swinging at mistakes in the zone. Of the eight, six were out of the strike zone. Of the six, the Red Sox swung at five. Five bad swings. As it turns out, five bad results: four whiffs and a foul. Instead of six balls, the Red Sox got five strikes and one ball. Bad, bad Red Sox hitters. Of the two “mistakes” in the strike zone, the Red Sox took one (for a strike; bad process, bad outcome) and swung and missed at one (for a strike; good process, bad outcome).

So that’s how I produced the numbers you’re about to see. I did that for all the secondary pitches thrown by Tigers starters: sliders for Scherzer, Sanchez, and Verlander; changeups for all three pitchers; and curveballs for Scherzer and Verlander only, because Sanchez’s curveball doesn’t have a consistent, deducible target. I looked at all the pitches they threw this year, surmised the target for each secondary pitch, and then counted how many "mistakes" have deviated from that target in this series.

Now, are the Red Sox doing anything with those pitches? Remember, these are mistakes. These are changeups up, sliders that catch the plate, curveballs that start out of the zone instead of breaking out of the zone. This is where the damage should come.

It might be helpful to know what these pitchers normally allow on “mistakes,” but time is crucial in posting these recaps so we’ll just acknowledge the obvious fact that, out of 41 mistakes in the strike zone, 0-for-11 with five whiffs is pretty bad; and that, of 78 total mistakes, 0-for-14 with 12 whiffs seems pretty bad, too. Again, like we said at the beginning, there’s a lot of data that we don’t know, particularly centered around each pitcher’s fastball effectiveness. But if I had to conclude something from these starts, I’d probably conclude that Scherzer, Sanchez, and Verlander were very good, as they virtually always are; but that the Red Sox had plenty of opportunities and missed them. That they’re slumping.

Also on Effectively Wild, I suggested that four-or-more-out saves seem slightly more common this year than in recent postseasons, and that more managers seem to take it as a given that the closer is available in the eighth inning. I didn’t have many numbers to back that up, but when Koji Uehara came on for a four-out save in this game I looked. My impression was probably wrong.

Here are how many four-out-or-more saves there have been in each of the past six postseasons, including this one:

About a third of the postseason remains, and it’s the highest-leverage portion of the postseason, so 2013 will almost certainly top every year but 2011 and could top 2011. But saves is a limited way of looking at this. After all, maybe closers came into the eighth inning and blew the saves (as with Joaquin Benoit in Game 2); they wouldn’t be tallied. Or a closer might have been used for two innings in a tie game (as with Trevor Rosenthal this week); also wouldn’t be tallied. So to broaden the query, I’m expanding it to this: total number of relief outings of four outs or more, from the eighth inning to the 10th inning, in games of moderate closeness (as measured by average leverage index). That query puts 2013 far off the pace of previous seasons:

So more four-out saves, yes, but probably not more aggressive use of relief aces.

Also, on Effectively Wild, I told Ben that the median pitching line this postseason, measured by Game Score, was Mike Minor’s 6 â…“ innings, eight hits, one run, one walk, and five strikeouts against the Dodgers in Game 2 of the NLDS. That’s how good pitching has been, I told Ben. But since then the median has gone up. It’s now this line, by Zack Greinke in the same game:

That’s a Game Score of 59. Over the past five seasons, pitchers with a Game Score of 59 have gone 250-101, and their teams have a .624 winning percentage—a 101-win pace over a full season. That’s how good the pitching has been in this postseason.

Finally, on Effectively Wild (just listen, maybe), Ben asked why the on-field reporter never asks good questions in the post-game interviews. We agreed that there is probably no real incentive to do so. Mike Napoli showed why. The on-field reporter asked him why it took him so long to hit his second career home run off Justin Verlander. (Napoli’s first career home run had come off Verlander.) So, that’s funny. It’s a sort of wry question. Could imagine a good response, or at least an attempt at a fun response: “He’s been afraid of me ever since,” or “I thought I’d go easy on him after he did me that favor,” or “sheeeeeeeeeeeeeeeeeeit man I’ve been trying!” Napoli’s response: “I don’t know. He’s tough.”

Then she asked something about his secret weapon, the pants leg-down look. (Napoli had switched his pants legs before the home run, maybe out of superstition or something.) Okay. Colorful question, I guess. Room to work. Napoli’s answer: “I don’t know. [inaudible mumbling.] I don’t know, just trying to put a good at-bat together and come through.”

You need to be logged in to comment. Login or Subscribe
Merlin90
I can't believe you didn't manage to work a "lights out" gag into those headlines.
Reply to Merlin90
lyricalkiller
crud, I forgot
Reply to lyricalkiller
chabels
As punishment, rewatch every gif of Albert Pujols running to first base. That'll teach you.
Reply to chabels
DetroitDale
Lackey got knocked around a bit in the first round but after the "lights out" he suddenly had better command of his curveball and came out a different pitcher the rest of the way. Both pitchers were told to "warm up" during the off period, I suspect that warm up time gave Lackey a chance to iron out what he was doing wrong. Still, I'm not going to go over conspiracy theories. There are a lot of Tigers that have good records against Lackey but somehow didn't come through here. So are we still denying that there's any such thing as clutch hitting?
Reply to DetroitDale
oloughla
Yes, and we're also denying that the batter vs. pitcher matchup statistics that you are citing mean anything.
Reply to oloughla
RedBux
Interesting article on Detroit's pitching. One question that I have is: Boston's whole lineup is in a slump? I believe the sequencing of pitches has really affected the timing of Boston's hitters. I believe the number of check swings in Sanchez's start indicated difficulty picking up the pitch.
Reply to RedBux
Abrawang
I wonder if any playoff team has ever had their first three starters pitch as well as Detroit's? I'd be willing to wager that no one has ever bested 21 IP, 6 hits, 2 ER and 35 Ks.
Reply to Abrawang
redspid
Boston's hitters are just Jack Morrising it; hitting to the score.
Reply to redspid
Dodger300
Beautiful!
Reply to Dodger300