It’s 2033, and baseball has seen better days. What’s good for a team has been harnessed so effectively that it’s become bad for the game.

Teams have all but mastered proper usage of their pitching staff so that nobody’s going much more than 75 pitches and nobody’s saving much of anything. The trend toward higher velocity that became a big topic in the early 2010s isn’t really slowing down. The average starter, to the extent that there are still starters, is throwing 96. The average reliever is throwing 97.

The average pitcher has blown by 9 strikeouts per 9, once thought the realm of only record holders, and the double-digit barrier will fall soon. And nobody swings any more. Why bother? There have been more walks as the arms race has prioritized more and more velocity, and power hasn’t gone down when there is contact made, so really, why bother? Wait the guy out and hope for the best. You probably weren’t going to hit it anyway.

Games are averaging 3 hours and 20 minutes mostly because there are no quick outs. There’s terrible defense in this baseball dystopia as well, since there are so few balls in play that there’s almost no reason to bother putting competent defenders out there. No base-stealing either. Mexico City led the American League with just 53 as a team last year.

The product has become a little tougher to watch, but it’s baseball so we watch it. For the chance that we’ll get to see one of the 15 no-hitters per year (12 or so per year combined) or see what could be Raul Ibanez’s final home run.

Baseball has seen much better days, though.

I mentioned on Twitter the other night that while we often say that a particularly tough-to-watch game sets baseball back a few decades, the Tigers and Red Sox were setting it forward a few. Specifically, it was the matchup of the Tigers’ futuristic pitching—eventually every staff will be putting up strikeout numbers like theirs, barring a rule change or fundamental shift in hitters’ approaches—against the Red Sox’s modern lineup.

Game 1 was a historic and at times wonderful mess, with Boston striking out 17 times against Anibal Sanchez and crew. Game 2 was more of the same with Max Scherzer. Déjà vu was running through the water as the Red Sox played right into Scherzer’s hands.

They waited and waited and waited on first pitches, running their typical deep counts, and then had no answers once they were behind and Scherzer could overpower with his slider. It took until the 11th Red Sox plate appearance of the day for someone to get the bat off his shoulder on the first pitch. Overall against Scherzer the Sox swung at the first pitch just six out of 25 times. But then they fell behind and had to. The righties whiffed on nine of his 17 sliders. He got five more whiffs on his changeup, which was just as effective, and 10 more on his fastball.

David Ortiz was one of the ones who swung at a first pitch. He wasn’t the only one. Shane Victorino, a bit of a hyper one, swung at two against Scherzer and might have swung at a third if it hadn’t hit him.

When Ortiz sees one that he likes, he’ll take a whack at it occasionally.

With the Red Sox down 5-1 after Jose Veras, Drew Smyly, and Al Alburquerque couldn’t get three outs in the eighth, Ortiz got a matchup with Joaquin Benoit.

“Different story when you’ve got bases loaded,” manager John Farrell said of the change in approach. “Obviously Benoit is trying to get a strike early. And David is such a smart hitter that he’s looking for one pitch on the plate early to turn it loose.”

Ortiz sounded like he had a pretty good sense of what was coming. He called that pitch a changeup, though Brooks Baseball has it classified as a splitter and Ortiz was using the terms pretty interchangeably. Outside of a rogue slider in a 2012 matchup, Benoit had thrown 42 pitches to Ortiz—26 fastballs and 16 splitters. 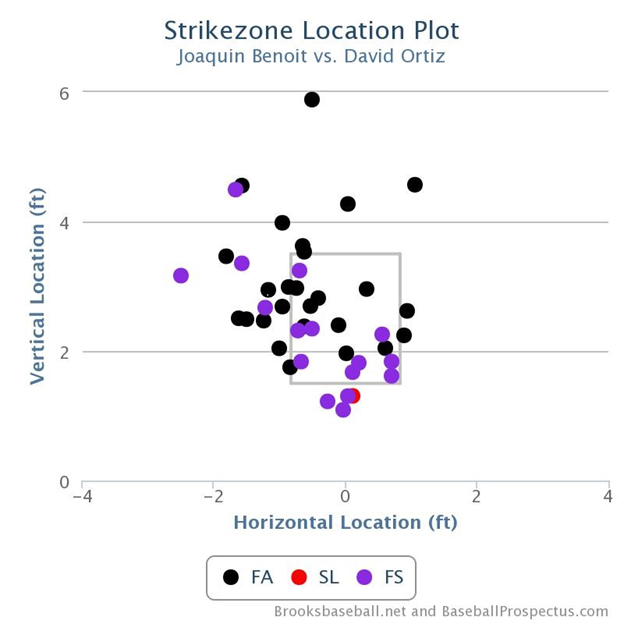 (Today’s pitch was the purple dot on the outside corner, which is on your left as you read this, touching the edge of the box halfway up the strike zone. Basically belt-high on the black, and he was able to pull it out the park.)

If Ortiz was really ruling one of those pitch types out, he pretty much had it narrowed down. So why wait?

Jim Leyland had the option to bring in Phil Coke in that situation to go lefty-on-lefty, and he ascribed his decision to the fact that “Coke hadn’t pitched a big game for quite a while.”

He had his best reliever in the game at the biggest moment to that point, and that reliever got beat by Ortiz.

And in providing that blow, Ortiz showed that there can still be some fun on the road to a strikeout-dominated game.