On Saturday, the Cardinals scratched home an unearned run on a Jon Jay sacrifice fly. It turns out that this was all the run support Michael Wacha and the Cardinals bullpen needed, as they eked out a 1-0 win over the Dodgers to take a 2-0 series lead in the National League Championship Series. Can the Dodgers win their first game and climb back into the series? Here is a look at PECOTA odds and projected starting lineups for tonight’s game.

Ethier and Ramirez are both questionable at press time and the lineup above is an educated guess, not an iron clad statement of fact. Given that Ethier has started only one game since September 14, I’m guessing he won’t be able to go. On the other hand, it seems like Hanley is going to try to play unless he has a broken rib. Nick Punto would go if Ramirez couldn’t.

PECOTA likes the Dodgers a lot more if Hanley can play. That 4.9 percent gap is significantly higher than Andre Ethier’s 1.8 percent gap over Schumaker. If the Dodgers lineup is diminished completely (no Ethier, no Hanley) PECOTA might actually be a little too optimistic about the Dodgers’ chances against the Cardinals ace.

It is more than a little surprising that PECOTA prefers the Dodgers over the Cardinals (albeit slightly) with Wainwright on the bump, but L.A. has been a bit of a PECOTA darling ever since the NLDS. The home field advantage obviously helps the Dodgers, but the Cardinals 43-38 road record was the third best in the National League this year.

Throughout his career, Wainwright has dominated in the postseason. The exception was in last year’s NLDS winner-take-all against the Nationals, where he didn’t make it out of the third inning but the Cardinals rallied and won anyway. Postseasons are nothing but small sample sizes, but Wainwright is one of the best pitchers in the game, and the postseason does nothing to detract from this.

Beyond the fact that Ryu has a tall order in his opponent, there are additional concerns about his most recent performance against the Braves in the LDS. The Dodgers won the game going away, but this was hardly due to anything Ryu did, as he only lasted three innings before getting yanked. 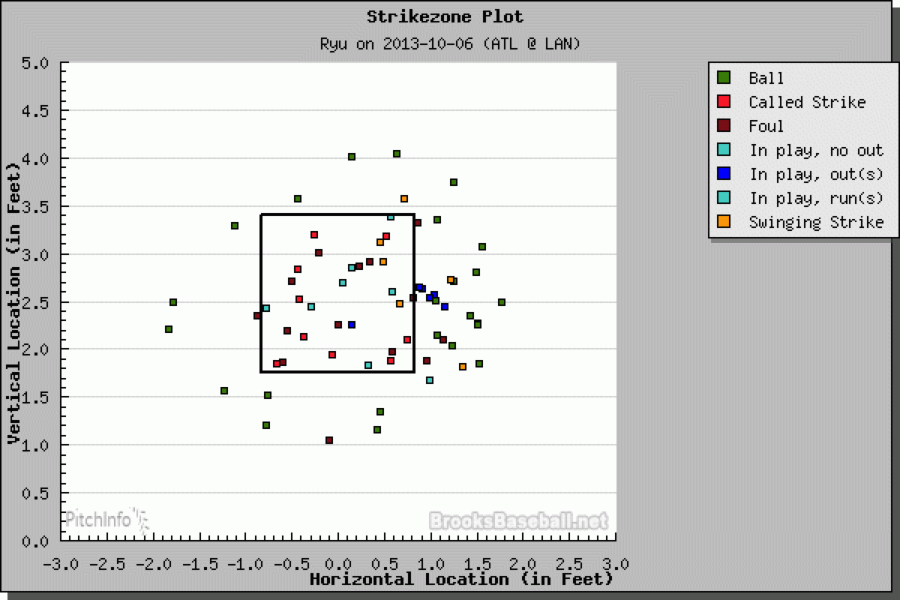 Most of the pitches in the chart above that fell inside the zone came during Ryu’s two-run first inning and his two-run third inning. He avoided trouble in the second inning when he avoided the zone. Ryu threw his slider far less than in his last three regular season outings than he had all year, and in his playoff outing he abandoned it almost entirely. Ryu doesn’t have dominant stuff so needs all of his pitches working and needs to be fine in the zone. Neither of these necessities was on display last week against Atlanta.

For all the Cardinals have dominated this series, they have outscored the Dodgers 4-2 across 21 and a half innings. Neither team’s bats have come to life yet, but the Cardinals offense has been especially moribund in the postseason. They had a .648 OPS against the Pirates and have had a woeful .397 OPS so far versus the Dodgers. Ryu is neither Clayton Kershaw nor Zack Greinke, but lost in the Cardinals’ 5-2 record this October is the fact that they’re not hitting. Couple that with their weak regular season against southpaws (only the Mets and Marlins had a lower OPS against left-handers), and this might not be the fait accompli that it looks like on the surface. Maybe PECOTA is on to something here.

However, devil’s advocate arguments aside, it is hard not to like Wainwright in what is a pivotal game for the Dodgers.