Friday’s NLCS opener offered most of the qualities we want in a playoff game. An impressive pitching performance. Three big plays by a perennial postseason hero. A play at the plate to preserve a tie. Extra innings. A walk-off win. Ernie Johnson summed up Game One well when he called it “a top-step night,” even if it was more of a “lying in bed with my laptop” night where I was.

Zack Greinke’s command was incredible. Aside from a little lapse in the third, when—following swinging strikeouts of David Freese and Pete Kozma and a weak groundball through the left side by Joe Kelly—he walked Matt Carpenter and left a 3-1 sinker up and over the plate to Carlos Beltran, Greinke consistently hit A.J. Ellis’ targets on both sides of the plate. His 10 strikeouts were a season high.

In particular, Greinke excelled at placing pitches in those few unhittable inches off the outside corner where strikes are called consistently against left-handed hitters. Check the region between the solid line and the one with the dashes: it’s full of red triangles, representing strikes thrown by Dodgers pitchers (primarily Greinke). Cardinals pitchers weren’t able to exploit the same area. (You can argue, of course, that umpires—in this case, Gerry Davis—should prevent any pitchers from exploiting that area, but that’s the way baseball go.) 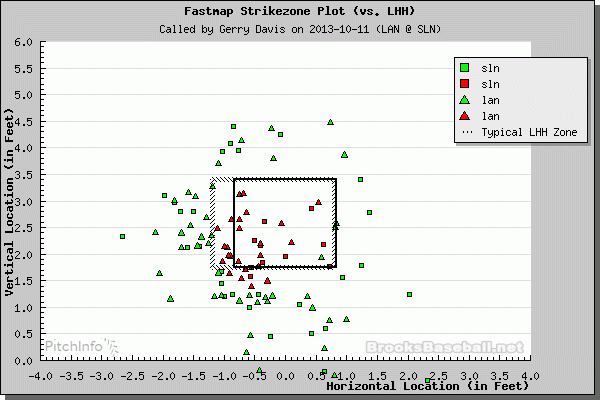 In their first matchup, Greinke neutralized Beltran with two fastballs on the outside corner, followed by a slider off the edge.

It was unfair, and indicative of the way Greinke manhandled hitters all night. He gave lefties very little to hit: 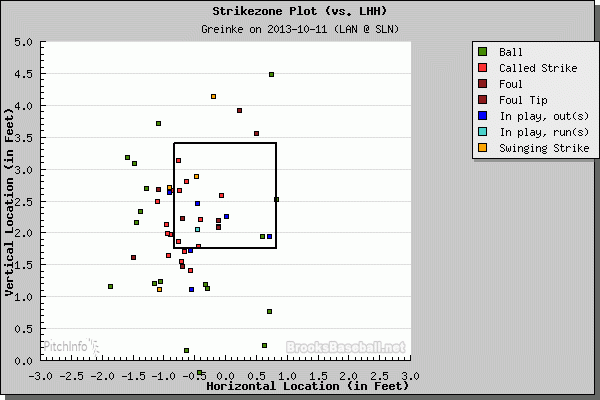 Greinke combined that command with filthy stuff, collecting 15 swinging strikes on pitches all over (and outside of) the zone, ranging from 94-mph fastballs to 71-mph curves. Cal Ripken’s Mike Mussina comp made sense. Mussina’s combination of command, movement, multiple pitch types, and sneaky speed made him one of my favorite pitchers to watch, and Greinke has some of the same qualities.

Other than that, this was the Beltran show. You know all about Beltran’s playoff history. Put it this way: Beltran has had so much success in October that collecting two hits (including a double) and driving in all three of the Cardinals’ runs actually made his postseason rate stats worse. His double to center in an eventful third inning—after a trip to the video room to review how Greinke had gotten him out earlier—drove in the Cardinals’ first two runs, and his 13th-inning single gave them the game.

In between the two hits, he ended a Los Angeles rally in the 10th when he caught a shallow fly from Michael Young and delivered a one-hop strike to Yadier Molina to cut down Mark Ellis at home.

Replays suggested that Molina might not have applied the tag, but when a throw beats a runner by several feet and the catcher catches it cleanly, the out call is almost always a foregone conclusion. Even if tag plays were eligible for replay review, the evidence wouldn’t have been conclusive enough to overturn the call.

The more of these moments Beltran accrues, the more certain it seems that he’ll be headed for the Hall of Fame. His regular-season advanced-stat case is already strong, but you can see how he’d have a hard time swaying some voters; he has almost no black ink and only one top-five MVP finish, and aside from his stolen-base success rate, few of his traditional stats really pop off the page. The postseason success should go a long way toward mollifying the kind of writer who’s inclined to care about those things: by the end of this series, Beltran will be close to 200 postseason plate appearances, with numbers that give him a strong case as history’s best playoff hitter. What with the weather and the increased caliber of competition, offensive stats are supposed to get worse in October, but Beltran missed that memo. The one thing he hasn’t done, despite his heroics, is win a World Series, so a ring this season could seal the deal.

The Game One win must have led to some sighs of relief in St. Louis; as good as Greinke was, Clayton Kershaw gives the Cardinals an even tougher assignment today (3:00 PM CT). 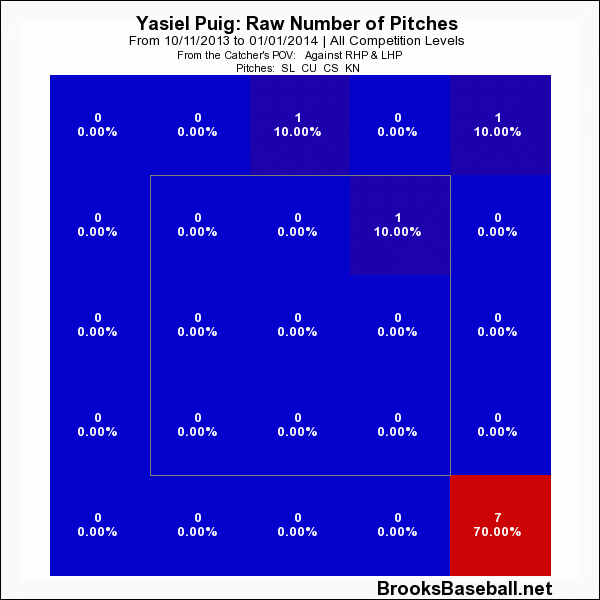 You need to be logged in to comment. Login or Subscribe
Merlin90
I'm in the UK, so MLB.TV is available to me during the play-offs. I was looking forward to using the audio overlay function to have Vin Scully's commentary over the pictures last night, but Dodgers radio was was the one audio option not available in this mode. As disappointing as falling asleep before the end of the game!
Reply to Merlin90
jashnew
Are you an English dude that likes baseball or an American living in England?
Reply to jashnew
Merlin90
The former. I started watching baseball with an American friend while at university a few years ago and never looked back!
Reply to Merlin90
jjpzebra
Beltran may be headed to the HOF, and I would be happy with that. However, he won't get many votes out of the San Francisco Bay Area. That trade that sent Wheeler to New York for him in 2011 turned out to be the worst one in recent memory. Beltran slumped, the Giants faded out of the race, he sulked, and meanwhile, Pence, who the Phillies got Hunter Pence after they lost the Beltran sweepstakes.

Oh, and the Phillies proceeded to make the playofffs on the strength of a Pence hot streak. And of course, last year Pence came (finally) to the Giants, juiced the team in a "don't let it stop" pep talk when they were down 2-0 to Cincinnati in the best of five, and the rest is history.

I could never figure out why Beltran didn't fit in Frisco.

Reply to jjpzebra
jjpzebra
Whoops, meant to say . . . Meanwhile the Phillies got Pence after they lost out on the Beltran sweepstakes.
Reply to jjpzebra
juiced
I'm a Giants fan and you have this totally backwards. Beltran got hurt shortly after he arrived but when he returned he led all of MLB in batting average the final month of the season. It's not his fault the Giants didn't make the playoffs without Posey, and it's not his fault that Sabean gave up their top prospect in return for him. Not is it his fault that the Giants spent too much money on loogies Lopez and Affeldt to re-sign him in the offseason.

Pence on the other hand was absolutely terrible after the Giants traded for him in 2012, barely playing at replacement level value. He gave a fired up speech after the Giants fell behind Cinci 2-0 in the LDS but I don't know any rational argument that attributes their subsequent championship on Pence getting revved up in the locker room. He didn't hit Posey's grand slam for him.

Pence then had a great year in 2013 and the Giants were wise to re-sign him considering how lousy our minor league system is, but Pence was bloody awful on the field during SF's world series run.
Reply to juiced
BillJohnson
The analysis of the Gordon substitution misses an important point, although the conclusion that Mattingly screwed up is sound. If Gordon then steals second, the odds of scoring (once) in that inning go up considerably, probably enough to offset the scoring-probability hit in later innings. For the move to make sense, Gordon MUST attempt a steal once he's in the game. That is of course risky with Yadier Molina behind the plate, but even Molina doesn't have a 50% kill rate, and Carlos Martinez isn't the best at holding runners on. Gordon may get thrown out, in which case the pundits will be yammering for Mattingly's head. He has to just let 'em yammer, and having said A, say B.
Reply to BillJohnson
SaxonB
It's not really missing anything because Mattingly didn't send Gordon. Thus, Lindbergh isn't addressing that issues because its not the decision Mattingly made.

Reply to SaxonB
BillJohnson
The point is that the failure to send Gordon is also a managerial decision, and Mattingly got it wrong.
Reply to BillJohnson
mschieve
Paul and Doug from the TINSTAAP podcast recorded last night while watching the game. I wish I could have just listened to them talk while watching the game.
Reply to mschieve
Lagniappe
Molina was 43% CS in 2013. Gordon is only 77% successful lifetime. I would let ole Pizza Cutter combine those numbers, because I don't know how, but I can see the probabilities are not favorable. (The picture of Gerald Laird gunning him down in the previous series is still lucid in my mind).

This argument may only be good for Billy Hamilton.
Reply to Lagniappe
jbriaz
Looking at Molina's CS numbers are not giving the full picture. Many runners don't even attempt to steal on him because of the fear of being thrown out. It may actually keep his CS numbers down. Just a thought.

And Lindbergh, good takedown on the pinch runner. I wasn't sure how I felt about that, but after reading your take, I think Mattingly's decision was not sound.
Reply to jbriaz
casejud
Pinch-running for Adrian Gonzalez is a bad move because it didn't TURN OUT WELL, isn't it? If any number of things go well for LA... Gordon comes around to score... Michael Young gets a hit, which he has done over 2000 times... or the Dodgers WIN, it's an great move, good move, or a forgotten one. Even Bill James doesn't know the true percentages in this situation, they are complex. It sure looks bad when it doesn't work though, I'll tell ya.
Reply to casejud
jashnew
@casejud- I agree. You have to pinch run for AGON. You never think , "what if we go to extra innings and need so and so". Let's score now. Maybe he should have tried to steal 2nd. I know about Molina. But that should have been tried.
Reply to jashnew
BurrRutledge
If you sit Gonzalez for the ping runner, then you must do everything possible to win now. Send him. Send him again. You can be blamed for trying and failing in the post-game.

In this case he made the choice to win now by pulling Gonzalez & then changed his mind when he didnt try to get him into scoring position for Puig. That's a managerial mistake in a tie game.
Reply to BurrRutledge
jashnew
I have two questions for you. Wouldn't it be cool if the TBS team would do baseball at the time? Also were you guys disappointed with the way some of the Cardinals were jumping on the other players and throwing some sort of liquid at Beltran? I say this out of concern for health. If I was Matheny I would say no more jumping, punching, and throwing liquid at other teammates.
Reply to jashnew