The role of set-up man is a tough gig. Serving as the bridge to the more famous, better-compensated closer, the set-up man carries all of the risks of a late-inning reliever with virtually none of the accolades. A closer who gets his requisite three outs (or more, as often happens in the postseason) might be credited for “shutting the door” on the opposition, but the eighth-inning guy is rarely mentioned in the aftermath of a victory. The only time the name of a set-up man appears in bold ink is when he gives up runs and incurs the dreaded blown save.

The situation is magnified under the microscope of playoff baseball, where one bad turn can hang like an albatross around a pitcher's neck throughout the offseason, and set-up men are stuck in an unenviable position with two potential outcomes: to succeed quietly or to fail loudly. Let's give the set-up men their 15 seconds of due fame and tip the cap to the top eighth-inning options (one right-hander and one southpaw) in the bullpen of each playoff team.

The Red Sox called upon Tazawa in all four games of the ALDS, and the right-hander responded with 2.3 innings of scoreless baseball and just a single baserunner allowed. He is nearly as stingy with the walks as teammate Koji Uehara, and the two pitchers also share a preference for the fastball-splitter combination. Tazawa leans more heavily on his fastball than the his pen mate, a sensible strategy considering his five extra ticks on the radar gun.

Tazawa's run-prevention numbers have taken a hit compared to 2012, although his K and walk rates have held relatively steady across seasons. Much of the damage is due to an elevated homer count, a key detail that could prevent Tazawa from staying within Beantown's circle of trust. The greatest sin a late-inning reliever can commit is to give up a decisive blast in the postseason.

The most intriguing aspect of Tazawa's delivery is his style of leg lift, which unpredictably changes in various situations. He will use a regular leg lift with runners on base or with the bases empty, and sometimes he exaggerates a stop at the top of his delivery. He will also invoke a quick-stride that is nearly a slide step, which Tazawa has been known to initiate even with the bases empty.

Breslow is Boston's token left-hander out of the pen, and he typically gets the late-game nod over Franklin Morales thanks to a superior standing on the spectrum of pitch command. The 32-year old Breslow has been a reliable source out of the bullpen for years, and his homer-killing tendencies of the past three seasons are a good complement to the riskier profile of Tazawa, but the stat on Breslow's page that raises eyebrows is a K rate that has dropped 10 percentage points from 2012. He is surrendering more contact than in any other season of his career, leaving him vulnerable to the vagaries of balls in play.

Breslow appeared in three of the four games in the ALDS series with the Rays, where he showed that he is more than just a specialist in compiling 3.7 clean innings. Breslow is effective against batters on both sides of the plate (career OPS split of just two points), and he actually posted reverse splits this past season to the tune of 123 points of OPS while facing 32 percent more batters who hailed from the right side.

The Tigers entered the season without an industry-approved back-of-the-bullpen guy, and speculation was rampant from spring training through the trade deadline that they would look to acquire a closer with the “proven” label. Veteran Jose Veras served as stopper for the Astros for the first four months of the season before Detroit pulled the trigger two days before the deadline, but with Joaquin Benoit having already established himself in the ninth-inning role, Veras stepped in to fill Benoit's old shoes as the primary setup man.

Veras sticks to a fastball-curveball combination against like-sided hitters, including a heavy dose of 40-percent hammers that he typically saves until he has the advantage in the count. He adds a changeup versus lefties, though it has easily been his least-effective pitch over the last three seasons.

Veras has inherited only a dozen baserunners this season, not one of whom has come around to score. Eight of those 12 inherited runners have come with Detroit while in the set-up role, despite pitching fewer than one-third of his innings in a Tiger uniform this season. A small sample of such a murky statistic tells us nothing about his actual skill, and occasional bouts with pitch command further cloud Veras's ability to form a safe bridge between the seventh and ninth innings.

Smyly likely would have cracked the starting rotation on a couple dozen other ballclubs, but the bar is raised for entry into the Tiger rotation. Instead, Smyly was arguably the most valuable pitcher in the Detroit bullpen. He walked just 17 batters all season, three of which came in his first game of the year. His ownership of the strike zone improved as the season wore on, and the southpaw walked just three hitters after the calendar flipped to July (in 27 total innings).

Drafted in the second round of the 2010 draft, Smyly is effective against right-handed batters yet absolutely dominant when facing fellow lefties. He had the platoon disadvantage in each of his six plate appearances versus the A's in the ALDS, but expect the Tigers to alter that approach versus Boston. With several right-handed options in the bullpen yet few quality alternatives from the port side, count on Smyly to be called upon when David Ortiz strides to the plate in a clutch situation.

Ronald Belisario was the top right-hander in the Dodger bullpen for much of the second half, but a September breakdown coincided with the reemergence of Brian Wilson to slide Belisario down the pecking order. The Dodgers went to Wilson in games one, two, and four, and he rewarded them with three shutout innings that included four strikeouts and zero walks. The beard may have lost the fear factor in exchange for a Gimli-inspired look of utter ridiculousness, but it is hard to argue with the results in Wilson’s small sample in the bigs this season.

Wilson could bring heat that scraped triple digits at his peak, and though he still sits mid-90s with his fastball, his go-to pitch this season has been an 87-91 mph offering with bite, a slider-cutter hybrid that Wilson undoubtedly refers to as his slutter. He has opted to throw the slutter on 72 percent of his pitches this season, including the playoffs, and his strategy is to blatantly stay away from batters on both sides of the plate. Consider the following heat maps, which show the locations of Wilson's pitches versus right-handed batters as opposed to lefties (from the catcher's point-of-view). 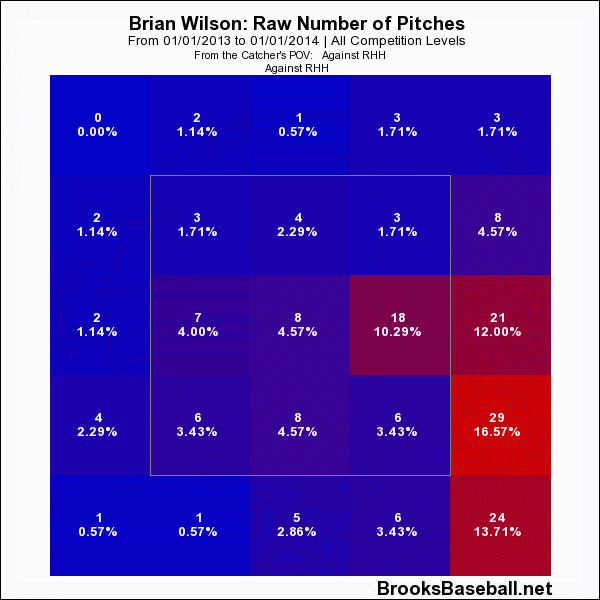 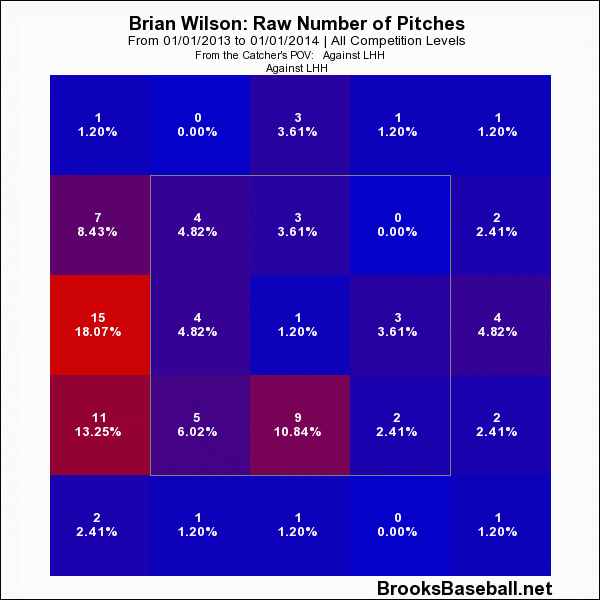 Wilson essentially sits outside the strike zone on both maps, which allows him to mask his iffy command with a low walk rate that might explode if a team were to adjust their approach.

Rodriguez was highlighted in this space just seven weeks ago as part of the RP-Funk All-Stars. Though he suffered through a couple of rough outings in the interim, the scouting report on Pac-Rod is pretty much the same. He is an unconventional southpaw who chooses from a wide selection of options rather than rely on raw heat or a particular put-away pitch.

Rodriguez was commonly used for a full inning or more in his mound appearances, but his late-season struggles resulted in just two such outings when the calendar flipped to September. He surrendered three of his season's five home runs in the final month while issuing six of his 19 walks on the year. The trend continued with a pair of unintentional walks in less than a full inning of the NLDS, along with a ninth-inning bomb that Rodriguez gave up to the left-handed Jason Heyward in game three.

Howell has taken on a more prominent role as the season has worn on, particularly as a lefty alternative when Pac-Rod is not on his game, and he receives an honorable mention in the Dodgers pen. His case is furthered by the extra layers of funk that envelope his mechanics.

There is a complete and utter lack of balance in Howell's delivery, such that he has to brace himself with the glove hand to keep from toppling over to the third-base side of the mound. Humorous. Dangerous. Volatile. Howell is all of these things.

Trevor Rosenthal was one of the most dominant set-up men in baseball this season, but the late-season struggles of Edward Mujica bumped Rosenthal into the closer's chair. Rookie Carlos Martinez has slid into Rosenthal's spot over the last few weeks, taking over the eighth-inning role in games with tight leads from late September through the NLDS. Martinez’ overall numbers are less than dominant, but his raw stuff is certainly qualified for the new job.

Martinez pitch two innings spread over three games in the NLDS, a showcase that demonstrated his elite velocity as well as his occasional bouts with poor pitch command. The rookie has an open stride that can be inconsistent at times, occasionally disrupting balance, and the issue leaves him open for avalanche innings when he can’t find his delivery. The Cardinals might want to keep Martinez on a short leash.

Siegrist relies heavily on a 94-98 mph fastball that he brings to the table on 85 percent of his offerings, and he uses the heat almost exclusively when he gets behind in the count. The other 15 percent depends on the handedness of the opposing batter, with Siegrist using the breaking ball as his second pitch versus fellow lefties (particularly with two strikes) and busting out the changeup when he has the platoon disadvantage.

Siegrist was nearly untouchable during the regular season, with just 17 hits allowed over nearly 40 innings (and just one home run). There is reason for the Cardinals to be cautious, however, as Siegrist has a tendency to lose his pitch command. He could be vulnerable now that the league has the book on his repertoire and approach. The Cardinals have Randy Choate in the pen as a second neutralizer of lefties, but while Siegrist can be used for multiple hitters from both sides of the plate, the 37-year old Choate is a true LOOGY.

You need to be logged in to comment. Login or Subscribe
HPJoker
How do you feel about Jose Veras' arm action? It's kinda violent.
Reply to HPJoker
jrfukudome
I'm surprised he doesn't pull a neck muscle.
Reply to jrfukudome