The bullpens took over early last night in Chavez Ravine, but the Dodgers poured on the afterburners and took Game Three in a 13-6 rout. Here is a look at the PECOTA odds and projected lineups for Game Four of the NLDS.

[UPDATE: The Dodgers announced Monday that Kershaw, not Ricky Nolasco, will start Game 4. That bumps the Dodgers' chances up to 73 percent, according to PECOTA, which doesn't consider the fact that Kershaw is pitching on three-days rest.]

As it has in every game this series, PECOTA favors the Dodgers over the Braves. The odds in this game are heavily on the Dodgers’ side, in large part due to uncertainty of how Freddy Garcia will hold up in a pivotal playoff game.

If the Braves had won last night, there was a possibility that Clayton Kershaw would have drawn the assignment for Game 4. PECOTA had the Dodgers with a lopsided 73.4 percent chance of winning with Kershaw on the bump. However, I suspect that PECOTA wasn’t accounting for Kershaw pitching on three days rest; in his career, Kershaw has never been asked to do this. The Dodgers win allows Don Mattingly to make the safer choice and go with Nolasco.

The Dodgers acquired Nolasco on July 6 from the Marlins in what looked like a pure salary dump. In his first 12 starts for L.A., Nolasco was lights out, putting up a 2.07 ERA in 74 innings with 62 strikeouts. In his last three regular season starts, Nolasco fell apart, allowing 28 base runners and 17 earned runs in 12 innings of work.

With the exception of a complete dud of a start on September 14 against the Giants, Nolasco has still been striking batters out and mostly keeping the ball in the park. This suggests some bad BABIP luck, although Nolasco’s swinging-strike percentage also plummeted during his bad run.

Nolasco’s lone appearance against the Braves in 2013 was on July 3, in his last outing with the Marlins before he was traded, and resulted in a 6-3 Marlins win. 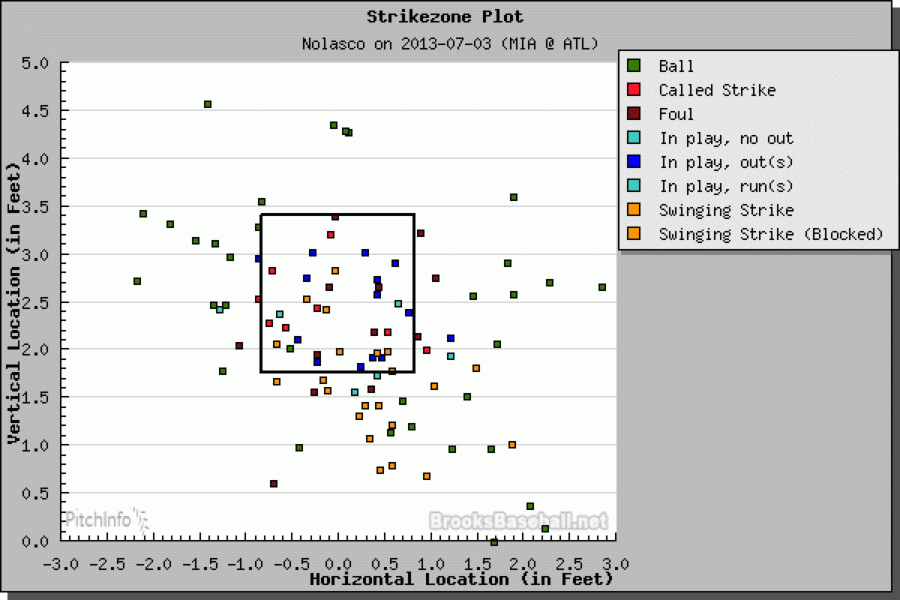 Nolasco’s success against Atlanta came as most of his successes came this year: with a balanced combination of fastballs and sliders, with the curve and splitter used as secondary pitches. Nolasco’s September slump saw him throwing more curves and splitters as he started moving away from the fastball. Maybe it was fatigue, and more rest will see a fresher Nolasco on the mound for Dodgers. Despite the win last night, they’ll need that, since like the Braves, they had to their bullpen early.

The Braves will be relying on Garcia to stave off elimination, an extremely improbable scenario that would have seemed impossible back in August. Garcia started the year with the Orioles in AAA, got the call in May, and put up an awful 5.77 ERA in 11 appearances before being optioned back to the minors. The Braves purchased his contract and promoted him in late August to provide bullpen depth. Injuries forced the Braves to stick Garcia in the rotation and all he did he was respond with three strong starts down the stretch for Atlanta.

Garcia is a junk-baller who relies mostly on deception to defeat his opponents. Three starts are too small of a sample to go crazy looking for trends, but Garcia did throw his slider far more in his last three 2013 starts than he had earlier in the season. Brooks Baseball also identified a shift from Garcia’s four-seamer to a sinking fastball down the stretch. The results for Atlanta were terrific, and while it’s difficult to imagine Garcia keeping this up, he isn’t going to be the pushover he was earlier in the year for the Orioles.

If Garcia does get in trouble early, look for Fredi Gonzalez to have a quicker hook than he did last night. Everyone with the exception of last night’s starter Julio Teheran is presumably available, even Alex Wood, who only threw 35 pitches last night. If Gonzalez does decide to shake things up, it is more likely to be with his bullpen usage than with his line-up. Elliot Johnson doesn’t have a hit in the series, but with Dan Uggla off of the roster, it’s unlikely that Gonzalez makes a change for the sake of making a change. Jordan Schafer in an OF slot is the other possibility if Gonzalez does decide to mix things up.

Garcia is the key to this game. He needs to give the Braves five or six solid innings and at least keep it close. If he can’t, there’s a good chance the Dodgers will be celebrating on their home turf and heading to their first NLCS since 2009.

You need to be logged in to comment. Login or Subscribe
fantasyking
Starting Freddy Garcia in an elimination game: Bad decision or Worst decision ever?
Reply to fantasyking
Dodger300
The great thing about baseball is that no one ever really knows what to expect.

I well remember hearing Bob Costas claim that the Dodgers were fielding the weakest team ever to appear in a World Series, before they went on to destroy the A's juggernaut in five games in '88.

Meanwhile, this year, Freddie Garcia is perfectly capable of throwing the game of his life while Ricky Nolasco could totally blow up. I hope not, but neither one of those outcomes would even feel very strange.

There is no need to get cocky ahead of time. It is better to just wait and watch what happens. There will be plenty of time for the victor to celebrate when the series is over.
Reply to Dodger300
drawbb
All that does is prove how long Costas has been hammering everyone with his hyperbolic drama queen act.

Even a quarter century ago, such a claim was absurd on its face considering that just a year earlier Minnesota had become the worst team ever to win the World Series at 85-77 and having been outscored on the season. Costas's memory certainly also extended back to the 1973 Mets, who lost the WS in 7 games despite a pathetic 82-79 regular season.

Compared to those two finalists, the 1988 Los Angeles squad at 94-67 was practically a juggernaut. Matter of fact, that may not have even been the worst Dodger WS participant since the 1959 outfit had posted a weaker record and perhaps arguably the 1981 team was worse as well.
Reply to drawbb
Dodger300
You are neglecting that the Dodgers best regular, Kirk Gibson, was not in the lineup, and managed only one at bat in the series. That did change the calculus considerably.
Reply to Dodger300
drawbb
Sure...but certainly not by 9-12 wins' worth. Even in 1988 and pre-WAR, I think we all understood that.
Reply to drawbb
Dodger300
You need to differentiate between the words team and one-up.

Orel Hershiser put the team on his back and carried them the the pennant and world championship. He had some pretty fair support on the staff, as the team posted a 2.96 ERA that year.

The offensive LINE-UP was not strong, and without the league's MVP it became much weaker.

I can't say that it was the weakest in the history of the World Series, but I can assure that no one would be too pleased have to go into battle with it.
Reply to Dodger300
georgeforeman03
Beats the alternatives. (Wood from last night or Paul Maholm)
Reply to georgeforeman03
fantasyking
I don't think it beats Medlen as an alternative. Or Maholm or Wood. Or a run-through-the-bullpen strategy, considering they are carrying so many pitchers on the postseason roster.
Reply to fantasyking
Dodger300
I am pleased the Dodgers pulled it out, but it was no thanks to Freddie Garcia. Starting him proved to be a good decision by the Braves.
Reply to Dodger300