Sometimes narratives have a way of working themselves out. If David Ortiz’s impressive blast down the right field line had gone foul, it would have been no big deal. The Red Sox were still going to beat the be-Deviled Rays with Koji Uehara coming out for the ninth and we’d probably still be talking about a lot of the same things.

But the fact that it stayed fair beyond the Pesky Pole was an exclamation point on the two things we’ll choose to take away from the Red Sox’s 7-4 win to take a 2-0 series lead Saturday night. David Price got lit up from the first inning to that last pitch, failing to generate swings and misses and giving up hard contact from missing his spots in addition to some softer ones that reflected the luck of these two games! And this was the game—there’s at least one in every series—where the managers were going to make you aware of their existence!

Joe Maddon, with a rested back end of the bullpen and an off-day coming Sunday, left Price in a batter (or more) too long to face Ortiz, who had homered off him in the first inning. This is admittedly a terrible sentence. That’s just about the definition of analysis from small sample sizes. Ortiz hits 117 points lower in True Average (TAv) against lefties than he does against righties.

Price had made a nice career against Ortiz—the DH was hitting .216/.310/297 with no home runs in 42 plate appearances. Price had enjoyed that much success mostly by going up and away with the fastballs, which are in black here. 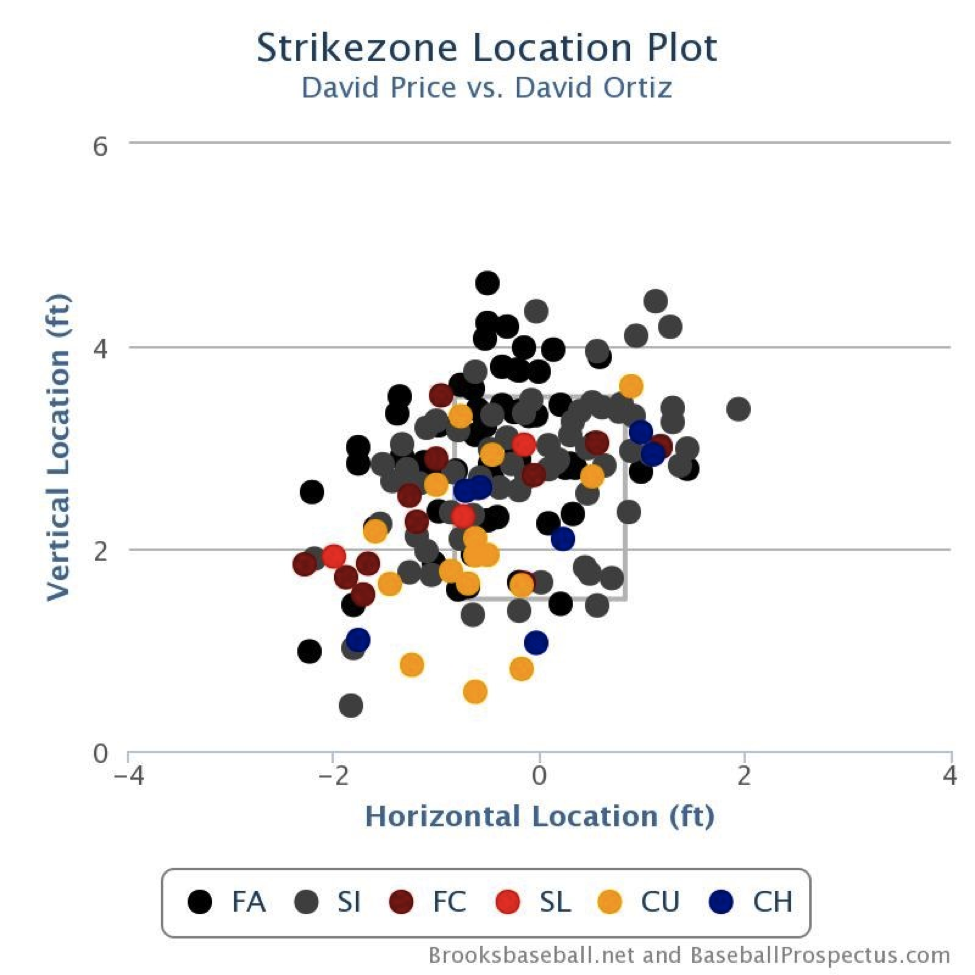 However, the first ball that was gone was a cutter that got a lot of the white space where he’d never lived before against Ortiz. The second was a fastball just above belt-high and on the inside corner that Maddon described as “hanging”—a rare description for a fastball.

After the second blast, Maddon was out of the dugout before Ortiz even finished his extremely slow home run trot, must less the curtain call for 38,705 who were otherwise content still chanting Wil Myers’ name on-and-off for another night.

It had already been a strange night for the skipper well before trying to squeeze one more batter out of Price, who becomes the first playoff pitcher to give up seven runs yet last seven innings since Randy Johnson in 1999 (Full Play Index list)

Maddon declined to burn lefty Matt Joyce when Joyce went to pinch-hit and Boston countered with Craig Breslow. A .164/.190/.309 hitter against lefties for the regular season, Joyce flied out as the tying run in the sixth. This came after another decline of the platoon advantage involving Delmon Young that is detailed here.

Maddon called the whole game “awkward” and said the Rays got “out-Fenwayed,” which in a sense was true. Ortiz got past the pole, David Ross scraped the Green Monster with a double that might have been caught in other places, and Stephen Drew tripled off the Monster when David DeJesus took his turn misplaying one there.

All the while, the questionable decision-making from the other side turned out okay. John Farrell left the lefty Breslow in to face Evan Longoria in the beginning of a right-switch-right-right section of the Rays’ lineup. He walked Longoria, but faciung what probably would have been his last batter either way, he got the switch-hitting Ben Zobrist to hit into a double play.

The Rays hit into double plays to end the seventh and eighth, both starting with a nifty play by Dustin Pedroia and ending with a putout by Mike Napoli and a fist pump by Ross running off the field.

Facing elimination for the fourth time in just over a week, the Rays get out of this not-so-fun house and head home with Alex Cobb and a big question mark in Jeremy Hellickson coming up. All Maddon could do was be optimistic.

“Boston this time of year is kind of lovely,” Maddon said. “And I’m looking forward to coming back in a few days.”