Last night, the Braves’ Kris Medlen proved to be no match for likely Cy Young Award winner Clayton Kershaw in Game One. Here is a look at PECOTA odds and projected lineups for Game Two.

Just like it did in Game One, PECOTA likes the Dodgers over the Braves for Game Two (although the advantage is smaller than it was with Kershaw toeing the rubber). Like Kershaw, Greinke has poor post-season numbers in a limited number of appearances/innings, but this should be ignored entirely.

Since allowing five earned runs in as many innings against the Rockies on July 3, Greinke has dominated, putting up a 1.57 ERA in 108 2/3 innings in 16 starts (Kershaw has put up a 1.75 ERA over that time). Greinke’s fastball velocity has dipped from 93.7 MPH in 2009 to 91.7 MPH this year, and in the first three months of the season, Greinke was still trying to rely primarily on his hard stuff. He adjusted in the second half by throwing fewer sinkers/cutters and relying more on a broader array of pitches, with a greater emphasis on off-speed offerings. His curve/changeup combination kept batters off balance and made his fastball appear to have more life to opposing batters.

Greinke faced the Braves on June 6 before his crazy hot streak started and had a strong outing, twirling seven shutout innings with seven strikeouts. However, the positive results came despite an inability to consistently throw strikes. 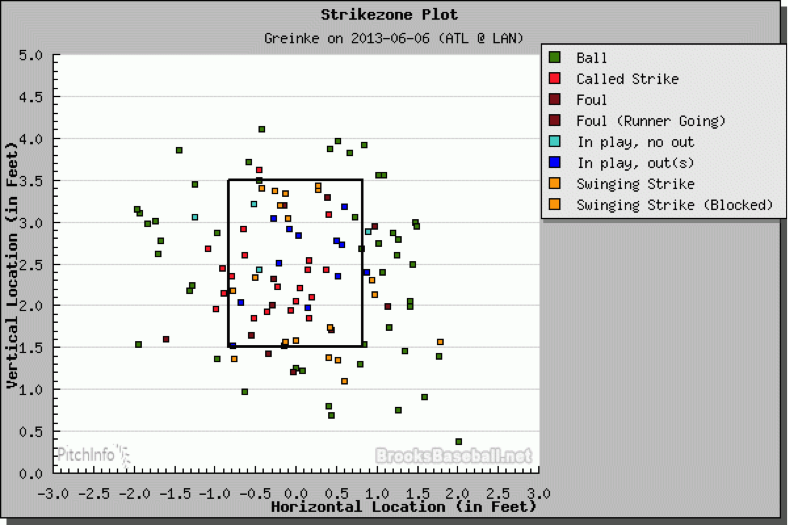 The Brooks Baseball data shows us a pitcher who was all over the place. Greinke threw 117 pitches but only 67 for strikes. His new and improved approach since July has led to far greater efficiency. Greinke’s strike percentage has jumped from 60 percent to 65 percent during his hot streak while his swinging-strike percentage has jumped from nine percent to 12 percent. Greinke’s improvements are legitimate, and even though he doesn’t breathe Kershaw’s rarified air, the Braves are still likely to have a hard time against the new-and-improved Greinke.

As was the case in Game One, while the Dodgers might have the pitching advantage, the Braves hurler was hardly a pushover during the regular season. Despite the higher ERA, Minor put up fairly decent numbers overall and is a solid pitcher in his own right. He faced the Dodgers twice this year and had two successful outings: a six inning, two earned run, nine strikeout affair in a 5-2 Braves win on May 19 and a six-inning, one-earned-run, six-strikeout game that Minor won in Los Angeles on June 9.

Minor’s lefty-righty splits were pretty close coming into this year, but in 2013, the southpaw has dominated left-handed batters like never before. We’re delving into dangerously small sample sizes here, but Minor has particularly killed lefties at home (.188/.216/.310 slash line). This won’t chase Crawford or Gonzalez out of the Dodgers lineup, but it is likely to send Schumaker to the bench. I’d anticipate that Scott Van Slyke gets the nod in a corner-outfield slot with Puig moving to center field.

This game has the potential for a low scoring pitchers duel, although I thought the same thing last night about what turned out to be a lopsided affair. My projected lineup for the Braves remains unchanged, but it’s entirely possible that Fredi Gonzalez shakes things up after a lackluster home opener. Twenty-one teams have lost the first two games at home in a best-of-five postseason series, and only two have come back to win: the 2012 Giants (against the Reds) and the 2001 Yankees (against the Athletics). The idea of a “must-win” game is anathema to an analyst, but the prospect of having to win three in a row, including another game against Kershaw, makes this game as close to a “must win” as possible for Atlanta.

You need to be logged in to comment. Login or Subscribe
Tracyy
If Puig is in CF the Braves have a chance.
Reply to Tracyy
MikeGianella
I projected Puig in CF based on earlier lineups. I saw Mattingly's comments about wanting to avoid Puig in CF this morning after I submitted this to editing. I now agree that this sounds unlikely.
Reply to MikeGianella
georgeforeman03
Atlanta just needs to relax and maybe ratchet back the shifting. Puig singled up the middle twice on balls where, if normally positioned, Simmons probably would've had a play. Atlanta seemed to want to do way too much in that game. (EG, all the diving for impossible balls in the 2nd inning, Heyward rainbowing it home for no reason, etc.) That was some pretty poor defense they showed last night.
Reply to georgeforeman03
danugglasforearm
I think a lot of poor decisions and misplayed balls on defense for the Braves caused it to be a lopsided affair. It's not so easy to just replace plays and re-do situations, but the Dodgers benefited a lot from sequencing and BABIP builders last night. Still, for Atlanta, an inexcusable performance. Just a frustrating game throughout.

I'd expect Fredi to do his normal overreacting, and take Gattis out of the lineup in favor of Jordan Schafer. Justin Upton will move back over to LF, and Schafer will play RF. Gattis is probably better suited for facing a reliever late in a game anyways, as that gives him the best odds to see a fastball.
Reply to danugglasforearm
dougcox
Schafer is 5-11 vs Greinke, so Fredi probably will start him (plus will overreact to play of Gattis as you mentioned above).

Fredi admitted the team (including himself) were nervous and trying too hard.

One would think that the manager would re-enforce that the players should play within themselves. It's the manager that should make decisions with urgency.

If Fredi can't do either, then he has limited value since his is not known as a strategist or a tactician. The Braves have played like the Bad News Bears in both of their playoff games. That has to change soon.
Reply to dougcox