The American League Wild Card situation remains fluid entering the season's final week. Six teams are mathematically alive, with three close enough to taste a spot in next Wednesday's Wild Card game. Singularity remains the game's biggest drawback, but its impact on the victor's rotation is a close second. Most teams, when faced with the situation, will use their best starter to survive; yet, for the Indians, the Wild Card game could actually ensure that their top starter appears earlier in the Divisional Series than he would otherwise.

Assuming the Indians meet expectations and leverage a breezy schedule into a playoff berth, then Justin Masterson—who continues to rehab from a strained oblique—or Ubaldo Jimenez would likely start the Wild Card game, with the other name starter taking Game 1. A scheduled off-day between the play-in game and the next series would allow the Indians to bring back their initial starter in Game 3, but creates the question: Who starts Game 2? Terry Francona could turn to rookie Danny Salazar or the experienced Scott Kazmir; however, this being a start on the road against the AL's top seed, he might prefer the pitcher with the most WARP on staff this season: Corey Kluber.

Kluber is the unexpected standout on a staff which boasts three former All-Stars and a well-regarded prospect. Jimenez and Kazmir's resurgences are surprising in their own right, but both were in the Opening Day rotation; Kluber was not. Instead he started the season in the minors, before an early recall. Add in a sprained finger that cost Kluber about a month and there were a few reasons why he seemed unlikely to lead the Indians in WARP. Yet Kluber entered the weekend a few points ahead of the aforementioned Kazmir.

Overachieving is nothing new for Kluber. The Padres drafted him in the fourth round in 2007, and traded him three years later to the Indians as part of a three-team deal for Jake Westbrook. At the time, a scout assessed Kluber as a "fringe no. 5 starter," according to Padres beat writer Tom Krasovic. Kevin Goldstein and Jim Callis echoed the sentiment, with Goldstein writing: "His ceiling is as a back-end starter, but he's much closer to that projection than he was a year ago."

Goldstein's report is much closer to being outdated than it was a year ago. Kluber used to top out around 92-93 mph; now he touches 96. Velocity is an overrated attribute since it's the easiest thing about a pitcher to measure, yet the added oomph has netted Kluber additional margin for error. The Kevin Millwood lookalike credits mechanical tweaks, implemented by minor-league pitching coordinator Ruben Niebla, for increasing the temperature of his heater. 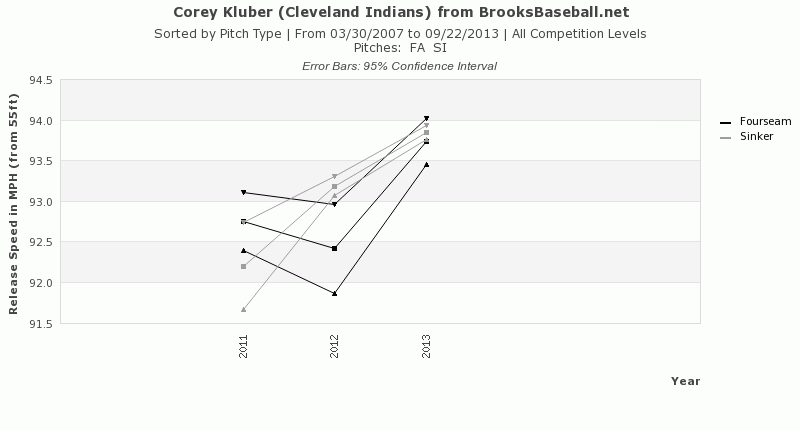 Although Kluber might have improved with the extra velocity alone, neither he nor the Indians left it to chance. For one, he obliged when the club asked him to experiment with a new fastball grip. In the past, Kluber used a four-seam grip, but he changed to a two-seam grip as way to improve his command, as it kept him on top of the ball. The trick worked, giving Kluber additional movement and improved location that, when twinned with his blooming velocity, increased his fastball's usability. For another, Kluber added a cutter to his arsenal, giving him a third secondary pitch to keep batters off balance.

With a better fastball and deeper arsenal, Kluber's ceiling now sits somewhere north of no. 5 starter status. Granted, even Kluber's most ardent supporter would guard against expecting him to sustain this performance; he's yielded about a hit per inning, meaning he'll need to keep his walks to a minimum to succeed. Despite locating three of his four pitches to both sides of the plate, Kluber has continued to have some platoon issues.

Still, Kluber has exceeded expectations on a micro and macro level, both externally and internally—after all, had the Indians known he could produce like this, they likely would have started him in their big-league rotation and not signed Brett Myers to a costly and unproductive one-year deal. Instead, it took injuries and a suspension for Kluber to get a prolonged opportunity in Cleveland. To his credit, he's made the most of it so far. Perhaps Kluber will be able to say the same if he gets the chance in the postseason. But first he'll need to help the Indians make it there.

You need to be logged in to comment. Login or Subscribe
HPJoker
This isn't meant as an insult, more as informative really, but Carson Cistulli has been on this guy for months now. The Corey Kluber Society meets during the works and days of Corey Kluber.

If you're unfamiliar with Corey Kluber and his work, please engage in the viewing of these .gif's.

Well still, enjoy the .gifs. He's a fascinating pitcher with electric stuff.
Reply to HPJoker
matty2485
I still think Kazmir gets the game 2 start (and maybe the Wild Card start). Kluber hasn't been quite himself since coming back from the DL. ERA over 4 in September and K's are down. Kazmir meanwhile has been locked in this month.
Reply to matty2485