Yesterday afternoon, Kyle Lohse lost to the Cubs, giving up three runs on seven hits over five innings. All of the runs were scored on homers, the more damaging and game-winning of which was a two-run shot by Nate Schierholtz in the third. That homer, which was hit on 3-1, followed three straight pitches that Lohse probably felt he deserved to get. Home plate umpire Chad Fairchild felt otherwise.

Today there's been a new revelation, courtesy of FoxSportsWisconsin.com's Andrew Gruman: According to Lohse, Fairchild—after that dinger—told catcher Martin Maldonado that the pitcher's "'grumpy face' was going to cost him strikes."

"Not a whole lot of it was me," Lohse said of his start. "When you have an umpire that says your grumpy face is going to cost you strikes, you've got issues. I wasn't as consistent as I wanted to be, but I made a lot of really good pitches and I guess I looked funny out there and I wasn't going to get the calls."

For what it's worth, Brooks Baseball rules in favor of Fairchild. 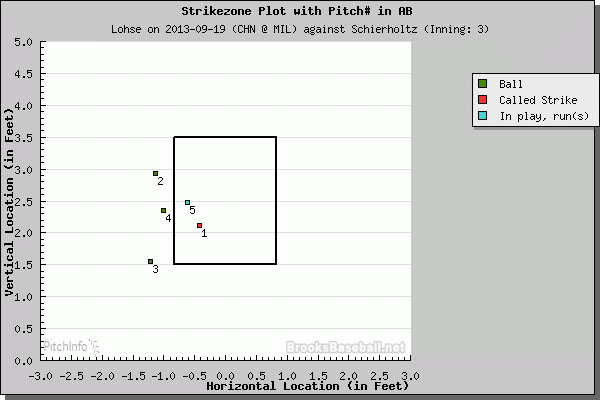 Of course, pitchers often get strikes off the outside corner vs. left-handed hitters, so Lohse was probably feeling a bit salty after going 0-for-3 on strike calls and seeing Schierholtz hit his next pitch 400 feet. But to hear him tell it, his frustration wasn't reflected on his face.

"It's been awhile (since I've shown up an umpire)," Lohse said. "I've matured out there. I don't think I did anything to show him up. I had a lot of calls that I thought could have went my way, I get the ball back and I made another pitch."

So did Lohse look grumpy, or did he keep his composure? Lohse's body language after the ball calls and the homer looks a little grumpy, but it's tough to see his face on either broadcast feed. When we do get a glimpse, he looks more or less like Kyle Lohse—which is to say slightly on the grumpy side, but not much more so than usual.

But what about after the inning was over? That's often the time when a pitcher on his way back to the dugout will really get his grump on. Let's go to the GIF! Which is what Warner Wolf would say in this situation, if he knew what a GIF was.

And there's the smoking gun: some serious grump going on. There's the initial glower: 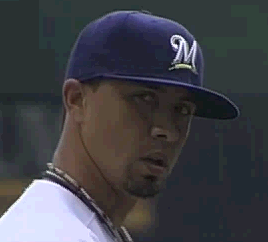 And then there's a second one that starts just as the broadcast cuts to commercial. Short of eyewitness accounts, there's no way to know how grumpy his face got after that.

Obviously, an umpire should be above penalizing a pitcher for the appearance of his face, so even thought Lohse did get grumpy, that's no excuse for threatening to call pitches incorrectly. But is there any evidence that Fairchild followed through on his threat?

Here's Lohse's pitch plot from innings one through three: 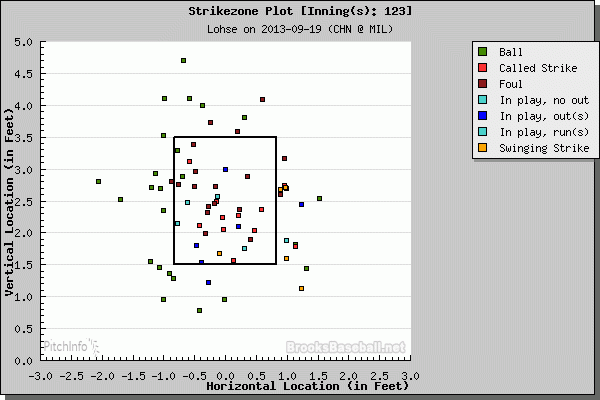 These plots aren't perfectly precise, but I count two in-zone balls and one out-of-zone strike, so let's say net negative one rulebook strike for Lohse. And here's the plot for innings four and five, which followed the grumpy face. 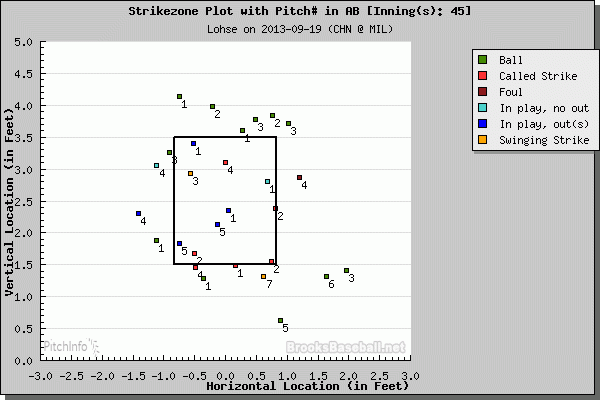 Now we see no in-zone balls and one out-of-zone strike. The net negative evened out! If anything, Fairchild called pitches more favorably for Lohse after he (allegedly) issued his threat. His zone was tight horizontally, but consistently so.

It seems safe to safe that there was no real fallout from GrumpyFaceGate. But man, that sure was one grumpy face.

You need to be logged in to comment. Login or Subscribe
cmaczkow
I can't believe an umpire would tell a catcher that his pitcher's grumpy face would cost him some calls. Isn't that something that should at the very least draw an investigation? That sounds like exactly the opposite of professional and objective, and even if the data shows nothing came of the "threat", the very fact that it was allegedly made should be looked into, and seems to be the biggest part of this story.
Reply to cmaczkow
lopkhan00
Just a guess, but maybe the umpire wasnt saying that Lohse's looks would cause Fairchild to call fewer strikes, but he was surmising that future umpires might not appreciate getting those looks.

So maybe he was just trying to be helpful for Lohse's future outings.
Reply to lopkhan00