The Astros and Reds played 13 innings of ugly, beautiful baseball last night. Daniel Rathman chronicled the lapses in judgment, failures to execute, and tactical mistakes that prolonged the contest between the two teams in today’s What You Need to Know, so you can go read about those there. Ultimately, though, the crimes against baseball that were Brandon Phillips bunting, Dusty Baker saving Aroldis Chapman for a save situation, and Jose Altuve’s TOOTBLAN will be forgiven, forgotten, or lumped in with other managerial mistakes and baserunning blunders. Billy Hamilton will be what we remember.

Hamilton, making his first career start and batting ninth, went 3-for-4 with two walks and four stolen bases. The steals were the most eye-catching part of his performance. As I wrote in today’s Lineup Card, Hamilton’s instincts on the bases aren’t unparalleled, but his speed and the inevitability of his attempts set him apart from other thieves. Each of his appearances on base is an event, because everyone watching knows he’s going to go; as Buster Olney wrote recently, Hamilton’s pinch-running appearances should be preceded by an entrance song, since they’re at least as exciting and game-altering as a closer coming in. Hamilton has failed to attempt a steal in only one of his 10 times on base, and then only because Shin-Soo Choo singled him home almost immediately.

It’s worth watching the four steals from Wednesday together, if you haven’t already:

The swipe that stands out is the third, which came on a 94-mph pitchout to Carlos Corporan, who had thrown out 10 of 35 runners before Hamilton made him look helpless.

The throw was wide, but its inaccuracy could have been the product of the pressure Hamilton’s speed puts on a catcher. When you watch Hamilton, it’s hard to believe that he could ever be caught. We know that it happens; even minor-league batteries threw him out 17.5 percent of the time. (Tim Raines, by the way, was thrown out on 17.8 percent of his attempts before his first promotion.) But if he gets a good jump, it’s almost impossible for a team to deliver a pitch to home plate and fire it back to second in time to get him. Hamilton makes it look like 95 feet might’ve been a better choice for the distance between bases.

But we knew before that four-steal performance that Hamilton could swipe second at will. What we weren’t sure of was whether he could do it when he had to get to first himself instead of starting out there. So while the steals were exciting, the hits and walks were the most encouraging indicator that Hamilton could be more than a pair of substitute legs.

Hamilton’s first hit was a double; he settled for singles on the next two, though the third could have been extra bases had it not hit the third-base bag. In each case, Hamilton saw a pitch from Brad Peacock that got plenty of plate and lined or slapped it the other way. He also drew walks in the ninth and 13th.

The pinch-running novelty act was nice, but this was the sort of performance that pushed Hamilton up prospect lists and made fantasy owners in keeper leagues salivate. A speedster who plays a premium position merits a roster spot more than, say, a second situational lefty, even if he never picks up a bat. But a guy who gets on base consistently, racks up steals, and plays a decent center? That’s a star, and the sort of player who makes his team your default first choice on mlb.tv.

As the hit and steal counts climbed, Twitter went wild with fun facts (He already has more steals than anyone on the Cardinals or Tigers!) and historical trivia (He’s the only player since 1920 to have four steals in his first start!) After one full game, the internet was in on Hamilton. Maybe he should be starting every game, David Pinto suggested, saying, “Somehow, I think the Reds offense would be better with Hamilton, Shin-Soo Choo, and Joey Votto batting 1-2-3.”

Well, maybe. But allow me to be the wet blanket. It’s not that I want to be one, because I was as spellbound as anyone. But the vision of Hamilton we were offered on Wednesday might have been a mirage, or at least the rosiest possible picture.

In 123 Triple-A games this season, Hamilton never reached base five times. Only once did he get to first base four times. Hamilton hit .256/.308/.343, which, well, wasn’t good. Some of that might have been bad luck; Hamilton had a .310 BABIP, well below what you’d expect from a player with his profile (and well below what he’d BABIPed at lower levels). But it also could have come from weak contact. As Jason Parks noted when Hamilton was called up, “his overall offensive game was one-dimensional and pitchers with a plan could eat his lunch,” cautioning that “the approach can be problematic and the swing itself has holes that upper-level pitching has been able to exploit.”

Hamilton showed that he could make lousy pitchers pay for leaving lifeless offerings in the zone, which is something, but he still has a lot left to prove. The Astros, after all, have a way of making their opponents look better than they are: the league as a whole has hit .272/.348/.448 against Houston. The three pitchers Hamilton faced on Wednesday have combined for a 5.17 ERA in 102 2/3 innings this season, with a 1.65 strikeout-to-walk ratio. Josh Fields, who handed him his first walk, couldn’t throw him a strike: 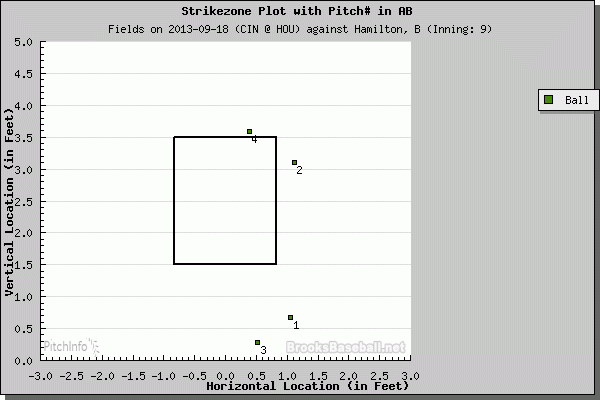 And Jorge De Leon, who awarded his second, has recorded more walks than strikeouts since his own recent arrival in the AL. Hamilton may have been making his first major-league start, but he was still facing Triple-A pitching.

Okay, we know he can hit. But can he keep hitting? Installing a player whose OBP barely topped .300 in the International League in the leadoff slot sounds like the sort of reflexive, bat-him-high-because-he’s-a-speedster move we would normally criticize Dusty Baker for making. We’ve bashed Baker for batting Zack Cozart second for much of the season; as fun as he is to watch, the current incarnation of Hamilton might not be a much better on-base guy. Hamilton didn't look great against Chia-Jen Lo, a hard thrower who came close to hitting his targets and struck him out on three pitches in the 10th:

Granted, the Reds have gotten little out of Ryan Ludwick, Derrick Robinson, Chris Heisey, and Xavier Paul, so it’s not as if Hamilton has a high bar to clear, especially after factoring in the defensive upgrade he’d represent in center. But as difficult as it was to watch Hamilton sparkplug Cincinnati and not see the next Ty Cobb, we should try to temper our short-term expectations for the just-turned-23-year-old. Twenty-six of the 30 pitches Hamilton has faced so far have been fastballs, so we have a good idea of what the gameplan is going to be: bust him inside with heat and try to knock the bat out of his hands. It didn’t work on Wednesday, but that doesn’t mean it won’t work for more effective arms.

I hope Hamilton flourishes. I want a full season of what we saw last night. But we probably shouldn’t count on that success starting now.

You need to be logged in to comment. Login or Subscribe
zasxcdfv
Billy Hamilton isn't a speedster, because a speedster only has 70 or 80 speed. He's a McLaren F1.
Reply to zasxcdfv
chupman
Can anyone make a realistic case that has Billy Hamilton part of the Opening Day lineup next year? What are his short-term opportunities and what reasonable outcomes can we project?
Reply to chupman
chabels
This is closely tied to Shin-Soo Choo (a free agent at season's end). The Reds actions toward him (he's a sure thing to get a qualifying offer, but should be among the best players available on the market) will be your first indicator about their belief in Hamilton's ability to play everyday (and to do it in CF).
Reply to chabels
bobbygrace
Baseball should create a designated runner position just for Billy Hamilton.
Reply to bobbygrace
maphal
That game was hard to watch aside from Hamilton. He played almost all of 2013 as a 22 year old at AAA. Given that he was learning a new position at a new level, I'm willing to give him the benefit of the doubt for his poor numbers at Louisville. He hit .283/.324/.367 after the ASB, which was encouraging.

Ben is right that power pitchers are going to overwhelm him for awhile when he becomes a permanent major leaguer. I still see the Reds keeping him in AAA for at least a few months next year to give him more confidence; one game against Disastros pitching doesn't mean much. My hope for him is to be a faster Juan Pierre, although I don't know if he projects to hit that high for average. Worst case scenario, he's a 4th outfielder that terrorizes pitchers in close games.
Reply to maphal
SaxonB
Sounds like you just hate the Reds. (nudge, nudge, wink wink)
Reply to SaxonB
walrus0909
Yes yes responsible forecasting blah blah blah not getting ahead of ourselves yadda yadda yadda.

Does he have a nickname yet? I vote "Billy the Kid".

Also, predict how many bases he would steal on Craig Robinson's pentagonal field (http://blogs.thescore.com/mlb/2013/05/23/flip-flop-fly-ball-five-bases-weird-yankee-stadium/).
Reply to walrus0909
chupman
175
Reply to chupman
hyprvypr
The media's reaction is much like the NFL fans reaction to a 4-0 Arizona Cardinals team. People are notoriously short sighted and seeing this take over a game against a bad team still leaves many inexperienced fans and media talk heads to suggest he can do so consistently. We know from his history thus far that he cannot.

All that in mind, it must be imagined the Reds are having some tough decisions to make regarding Hamilton and potential playoff rosters...
Reply to hyprvypr
mdthomp
it wont be tough. you have to include him in post season roster. imagine the impact he could have in the wild card game?
Reply to mdthomp
Justice
The question with Billy Hamilton is, of course, his bat. He is definitely a weapon in the post-season as a pinch runner but would any team dedicate a roster spot to pinch runner for a whole season? The A's did that years ago with Herb Washington but no one has done that since.

If Hamilton can just hit.210 with and on base percentage of .300, his speed makes him enough of a weapon to justify the Reds batting him 8th and playing him in CF. If he hits less than that, I don't see the Reds starting him.
Reply to Justice