The ability for a pitcher to repeat his release point is at the heart of pitch command. Timing plays the most critical role in generating an ideal release point, but the physical position of a player's arm slot is another variable in the equation. In general, those pitchers with the best command are able to repeat both the vertical and horizontal position at which the baseball leaves the hand, while those players with more volatile release points will suffer the statistical consequences.

Ben Lindbergh wrote a great piece on Ubaldo Jimenez earlier this week, highlighting the elements that underlie the right-hander's leap in performance over the last few months. Ben asked that I chime in with my thoughts on Jimenez's mechanics. I have been very critical of Ubaldo's delivery in the past, going so far as to use Jimenez as the example of what not to do in my presentation at the Sabermetrics, Scouting, and Science of Baseball seminar in Boston last month. Jimenez has made a few positive adjustments in the last few months, but the baselines for his delivery are still very much in the red, and I leaned on the release-point data from Brooks Baseball to demonstrate the volatility inherent in his mechanics.

Ubaldo's release point has been all over the place, even during his recent performance spike, with the above graphic depicting the release-point data from Monday's start against the Royals. The erratic release stems from a combination of wayward strides, varying degrees of spine-tilt, mistimed deliveries, and inconsistencies when pitching from the windup versus the stretch.

For the purpose of comparison, consider the release-point charts for a few pitchers who have had great success with repeating their arm slots.

Bumgarner is one of my favorite examples of a pitcher who finds nearly the same release point on every pitch, and the advantage of this consistency is reflected in his rate of walks allowed as well as the tendency for major-league hitters to be fooled by his fastball-slider combination. The tight cluster of release points effectively masks his pitches out of the hand, and the chart helps to demonstrate the extreme angle that Bumgarner generates with his closed stride and low three-quarters arm slot.

Lee has long been renowned for his ability to command the strike zone, and his consistent release point is at the root of a walk rate that has stayed under five percent in each of the past six seasons. He uses a higher arm slot than Bumgarner with a less extreme angle, but Lee is just as adept at repeating his delivery.

I'm admittedly partial to southpaws, particularly those who can repeat their delivery in the face of coaching strategies that favor funk over efficiency, but here's an example of a right-hander whose explosive stuff sometimes overshadows his ability to find a consistent release point.

Stasburg's timing can suffer as he fatigues, but the he does an excellent job of repeating the positioning elements of his delivery in nearly any context. The elite repertoire is such that Strasburg could succeed without such efficiency, but his release-point consistency further raises the altitude of his tremendous ceiling.

The release-point charts at Brooks Baseball can be incredibly useful, revealing subtle trends in a pitcher's strategic use of his pitch mix, his approach to batters on both sides of the plate, or the functional implications of certain mechanical tendencies. Let's explore some of the more interesting tales of pitchers whose release-point data adds context to the story.

Speaking of elite stuff, Kershaw's wicked arsenal includes a couple of hard-breaking pitches and 92-95 mph heat. The three-pitch mix spans 20 mph of radar-gun velocity, and the southpaw continues to improve his mechanical efficiency each season, further honing his game. The key takeaway from the release-point data is that Kershaw has a tendency to get on top of the curveball more than the slider, using a higher arm slot in an effort to augment the vertical trajectory of the pitch. The difference is subtle to the naked eye, with a wide enough gray area to prevent tipping the pitch, but the pitch-specific cluster pattern is relatively stable on a game-to-game basis.

Scherzer added a curveball to his regular repertoire this season, and though he uses a low arm slot that approaches sidearm, he has also exhibited a tendency to raise his release point when the catcher calls for a hammer. Similar to Kershaw, Scherzer has a release-point pattern that is disparate yet not so predictable as to outweigh the sheer effectiveness of his pitches.

Liriano uses a very different approach depending on the handedness of the opposing batter. He starts on the first-base half of the rubber when he has the platoon advantage against left-handed bats, but he moves to the extreme third-base side when facing right-handed hitters, netting disparate release points that can easily be seen in his release-point chart. 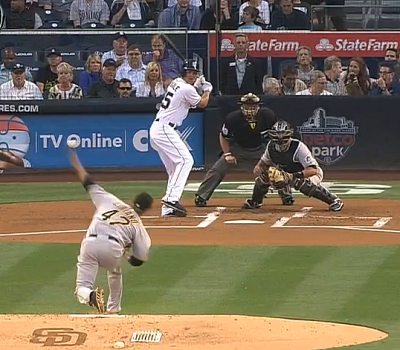 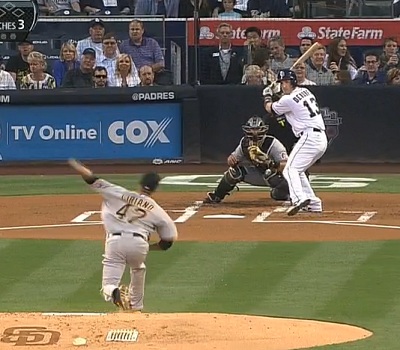 The strategy is ill-advised for a pitcher with such an extensive history of inconsistency, but Liriano has been able to parlay the technique into an advantage this season due to his rediscovered ability to get the ball down in the zone (or under it). The plot also highlights the southpaw's tendency to raise his arm slot on sliders when compared to the fastball, particularly against fellow lefties, though such a strategy requires additional spine-tilt and thus functions as a bad omen for his repetition in the future.

Bauer utilizes the same technique as Liriano, changing his starting position on the rubber in order to exploit angles against batters on each side of the plate, though the right-handed Bauer uses a mirrored pattern. It is frustrating to watch such a talented young player continue to add wrinkles of complication to his delivery, further widening the chasm that exists between what he is and what he could be.

The biggest obstacle to Bauer's success at the highest level is inconsistent mechanics, and though he is a student of the game who has uncovered some of the hidden secrets to stardom (such as strong momentum), the former first-rounder will not approach his ceiling until he can accomplish the fundamental task of repeating his delivery.

Gallardo is perhaps the most egregious example of a pitcher who sacrifices posture in the quest to find an over-the-top arm slot, and his release-point data demonstrates the difficulty of finding a consistent release point with such heavy spine-tilt. His data points follow a flat pattern of scattered arm slots, with a wide range of outcomes that are effective only in so far as they are random. Gallardo has struggled to overcome the deflation of his raw stuff over the last two seasons, and he lacks the fundamental components necessary to survive any further depreciation of his repertoire. 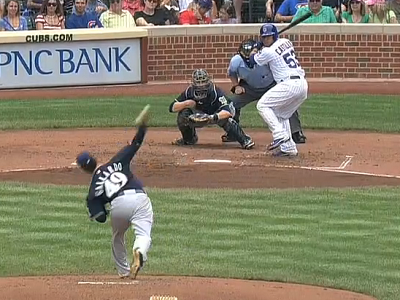 Gallardo’s high arm slot might promote a steeper downhill plane while minimizing the lateral variation of his pitch location, but the strategy also saddles him with the burdens of inconsistency and a shallow release point.

Latos shows what it looks like to be successful with the Gallardo strategy, as he is able to repeat his arm slot much more effectively than most pitchers who sacrifice posture in the name of height at release point. Latos' release is still inconsistent when compared to well-balanced pitchers, and he must contend with the natural trade-off that exists between height and distance at release point, but he also represents the high end of expectations with such a technique.

Latos' teammate in the Cincinnati rotation has perhaps the craziest pattern of release points in the game. While some pitchers are inconsistent due to unplanned fluctuations in their mechanics, Arroyo blatantly manipulates his angle of shoulder abduction in addition to his spine angle, displaying intent behind his chaotic release point. He ranges from a high arm slot to one that is dropped down to sidearm, and he appears to have a couple of specific slots in mind while avoiding the middle ground. 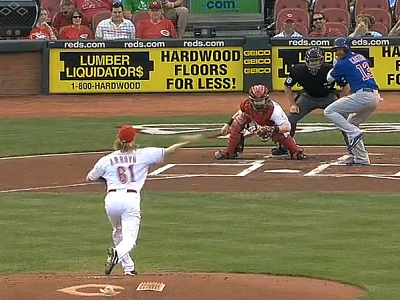 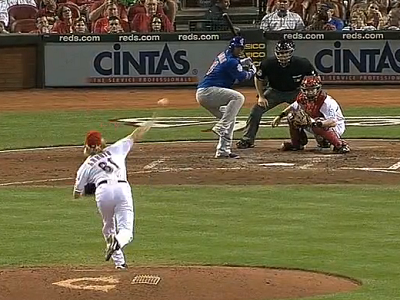 Arroyo defies convention by going most often to the curveball when he uses the lower slot, though he occasionally drops down even farther when he goes to the changeup. His average curveball is released more than half a foot lower than his other pitches, a fact that shines brighter when we consider that the breaker is his most common pitch this season.

Arroyo mixes up his technique as well as his repertoire to keep opposing batters on their heels, distracting them with his showgirl leg-kick and diverse arm angles. His game is rooted in deception, and an unpredictable pitch-mix combines with a dynamic arm-slot to prevent opposing batters from sitting dead red, helping to minimize the magnitude of Arroyo's mistakes.

You need to be logged in to comment. Login or Subscribe
hotstatrat
very interesting, thanks
Reply to hotstatrat
fawcettb
This is consistently the most interesting analysis on the site. Thank you.