Allow me to be the millionth person to analyze the Window 8 "scouts" ad that you've seen a bunch of times on mlb.tv for the past month.

Most of the response to this ad has focused on the stats: "what's this kid's ERA? How about against lefties," a question that establishes quite clearly that these are not actual baseball men so much as a group of hustlers engaged in a long con that somehow involves convincing a baseball player that he is being signed for loads of money. It's a Rube Goldbergian scheme, really, and the kid "signing" to play baseball is just the 14th or 15th step, depending on how smoothly everything goes. Among the other steps:

Regardless, we, despite our reputation as a site for the advancement of baseball statistics, will be ignoring outright the use of platoon-split ERA in this commercial and instead answer a simpler question: What about the kid's mechanics? For that, we turn to Doug Thorburn.

Here are those mechanics:

From my view it's a classic left-handed motion. "The pitcher clearly knows what he is doing, because the delivery is legit," Doug says. "He is your typical closed-striding lefty, though, and his glove side is weak after foot strike. But I do like his posture into release point."

Well then, settled. Good mechanics, and great stuff! Not so fast, Doug says.

"I have to disagree with the 'this kid has great stuff' comment. The scout in the ad is reacting to a warm-up pitch, maybe 80 mph and with no apparent movement. And lots of pitchers have strong mechanics in warm-ups but lose it at full-speed."

We never do get a great look at the pitch, but there are two small looks, one as it comes out of his hand and one where it pops in the glove:

There is no doubt that that is a lot of dust being popped. But the angle of the pitch suggests a steep decline and a 60-65 mph pitch. To me, at least. The tricky thing is this, though: 65 mph, or 80 mph, or 100 mph, all rely on the concept of an hour. Wherever this ballpark is, it follows no time that you and I have ever experienced. When the pitcher delivers the pitch, the catcher's shadow is to his right; if this park is aligned like most big-league parks, that would make it late afternoon. But by the time the pitch arrives, just one second later, it is now (according to the catcher's shadow) already the next morning! Or perhaps the previous morning! And when the scout goes to the mound not 15 seconds later to sign the kid, 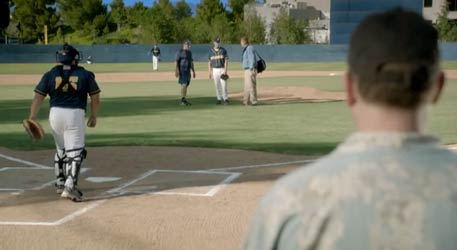 the shadows are nearly covering the infield, putting us now into early evening. You can understand why the guy's tablet isn't working. Freaking physics isn't even working.

(You might also like: Cespedes Family Barbecue's take on this ad; the Dip 'Ems Party vs The Dude Who Forgot The Guac Party; and Nobody Eats The Food.)

You need to be logged in to comment. Login or Subscribe
jasunlee
There are about 700 things that drive me crazy about this ad, but the one thing I have the hardest time getting past is the fact that lefties hit (or at least score more runs?) against this kid than righties do.

His ERA isn't just higher, it is over a full run higher.

Assuming he is facing the normal splits of R/L that a lefty would, it seems that the fact (no matter what the sample size is, really) is that this kid can't get left handed hitters out.

I am assuming the scout that uses Windows 8 works Jerry Dipoto or Rick Hahn.
Reply to jasunlee
gweedoh565
You're ignoring the possibility that LHP with reverse platoon splits are the new new market inefficiency.
Reply to gweedoh565
jrfukudome
I'm surprised there was no mention of the stellar pitch framing...
Reply to jrfukudome