The Weekend Takeaway
Yu Darvish and Yusmeiro Petit don’t have a whole lot in common, apart from the first two letters of their first names. One throws a blazing fastball, the other barely touches 90 mph with his heater. One thrives on pure stuff, the other requires deception and command to miss barrels. One has the talent to win multiple Cy Young Awards, the other faces an uphill battle every March just to earn a big-league roster spot.

But the two right-handers now make up one-sixth of a club more exclusive than one they nearly joined instead. Darvish retired 26 consecutive Astros to begin his 2013 campaign, only to have the 27th, Marwin Gonzalez, bounce the first pitch of his at-bat through Darvish’s legs and into center field. Gonzalez rejected Darvish’s bid to earn the 22nd perfect game of the Modern Era. The next pitcher to come that close was Petit—on Friday night, in the second of four games between the Giants and Diamondbacks at AT&T Park.

Against all odds, Petit came even closer than Darvish did. The 28-year-old, who began his professional career with the Mets and subsequently made major-league stops with the Marlins and Diamondbacks before coming to the Giants in 2012, secured a starting job only because Matt Cain was on the disabled list and Barry Zito pitched his way out of the rotation. As Bay Area News Group beat writer Alex Pavlovic pointed out, Petit had twice been removed from the Giants’ 40-man roster. He was designated for assignment when the Giants acquired Guillermo Moscoso from the Cubs in late July.

Nevertheless, using a mix of fastballs, cutters, and curveballs, with a few changeups sprinkled in, Petit baffled the Diamondbacks for 8 2/3 innings.

He exhibited pinpoint command of all four of the pitches, hitting the glove of catcher Hector Sanchez wherever it was set, which typically—at least early in the count—was down and away. The hard stuff induced soft contact, the curveball and changeup missed bats, and Petit needed only 65 pitches to complete seven innings. He struck out seven and coaxed 13 ground-ball outs.

Fastballs and cutters on the outer edge stymied Paul Goldschmidt. Aaron Hill fell victim to a well-placed curveball. Martin Prado was tied up by a fastball that got in on his hands. Whatever plan Sanchez devised for each hitter, Petit executed it almost flawlessly, retiring Kirk Gibson’s most potent batters without asking his defense for much more than routine plays.

On two occasions, Petit required something extraordinary—a “web gem” to save the day. The first came with two away in the sixth inning, when the opposing pitcher, Patrick Corbin, flared an 0-2 pitch to left field. Bruce Bochy, aware of the circumstances, had substituted the speedy Juan Perez in for Brett Pill before the frame began. And that move paid off when Perez turned in this diving catch, which would have been one of the Play(s) of the Weekend were it not mentioned here, to help Petit record out no. 18.

The other came with two out in the ninth, when Gibson sent pinch-hitter Eric Chavez to the plate. 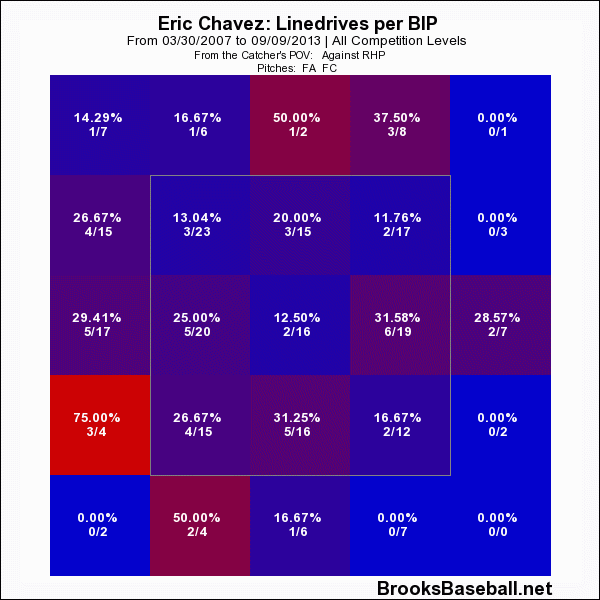 Giants’ color broadcaster Mike Krukow mentioned that Chavez is a good middle-away hitter, one with a strong chance of squaring up the fastballs and cutters Petit had thrown knee-high over the outer third from the first inning through the ninth. Chavez worked the count to 2-2, then somehow laid off another outstanding two-strike curveball from Petit. With the count full and Petit unwilling to risk the perfect game in the interest of notching a no-hitter, the righty went back to the fastball, and Chavez—as he often does—lined it to straightaway right.

In most other ballparks, right fielder Hunter Pence would have been playing closer to the foul line, but at AT&T Park, the Giants prefer to protect the 421-foot alleyway in right-center. That positioning made all the difference, when a lunging Pence came a foot short in his effort to secure the 27th out. He apologized to Petit—“my bad”—in the Giants’ handshake line, after Petit retired A.J. Pollock on a ground ball to complete the shutout.

And so, instead of being one of 22 pitchers to complete a perfect game, Petit is now one of 12 to lose one with two outs in the ninth—along with Darvish, Armando Galarraga, Mike Mussina, and eight others. With less than three years of big-league service time, he remains under the Giants’ control through 2014 and will need to pitch his way onto the roster again next year.

Quick Hits from the Weekend
The Pirates ventured into St. Louis with a 1 ½-game lead over the Cardinals. Anything but a sweep would have left them in first place. But the hosts outslugged the visitors 12-8 on Friday, shut them out 5-0, on Saturday, and nearly posted another blanking on Sunday, plating nine runs by the end of the fifth inning, before the Bucs countered with a pair in the ninth. And now it’s the Redbirds who boast a 1 ½-game division cushion, their largest since August 27.

Even with Allen Craig sidelined with a sprained left foot, the Cardinals sent A.J. Burnett to the showers early on Friday and then scored seven runs off of Jared Hughes and Bryan Morris in the seventh inning before Vin Mazzaro recorded the first out. Adam Wainwright, who had been rocked by the Reds in each of his previous two starts, tossed seven innings of shutout ball on Saturday, and the Cardinals notched five runs against Jeff Locke, Jeanmar Gomez, and the now-healthy Jason Grilli. Sunday’s game was over early: Charlie Morton was shelled to the tune of five runs in 1 2/3 innings, Stolmy Pimentel and Vin Mazzaro helped the Cardinals pad their lead, and Michael Wacha left no doubt that St. Louis would come out on top, matching Wainwright’s seven-frame, no-run effort.

All of that left the Pirates stuck on 81 wins, which assures Clint Hurdle’s club only of its first .500 finish since 1992, a hurdle that it cleared on Tuesday. Win no. 82 will come soon, and the Nationals and Diamondbacks are a mile back, essentially ensuring that the Pirates will play into October. But with a 45-25 record at PNC Park and a 36-36 mark on the road, their odds of a pennant run would look considerably better if they at least earned the right to host the Reds in the wild card playoff, instead of merely a winner-take-all ticket to Cincinnati.

The schedule won’t do the Pirates any favors.

The Cardinals, who are 44-25 at Busch Stadium, have more home games left than either the Pirates or Reds, and only three of their last 19 will come against a winning team. Both the Pirates and Reds have plenty of games remaining against bottomfeeders, but Pittsburgh must survive a three-game trek to Texas, where the Rangers are locked in a tight battle with the Athletics and not yet assured of a wild-card berth if those plans fall through.

The Reds, having played one more game than the Cardinals and two more than the Pirates, will also enjoy a day off before each of their head-to-head showdowns with the Bucs, who will enter the first—a three-gamer at PNC Park on September 20-22—having played 14 games in as many days. That stretch will reach 20 games in 20 days, before the Pirates take a breather in advance of their visit to Cincinnati on September 27-29.

Desperate times call for desperate measures—and the Yankees were desperate in the top of the eighth inning on Sunday, with a one-run lead to protect for six more outs to avoid a four-game sweep at the hands of the Red Sox. Joe Girardi’s desperate measure was to bring Mariano Rivera in for a six-out save attempt. Had Rivera finished off the visitors, it would have been his first two-inning save since Game Two of the 2009 World Series and his first regular-season six-out save since July 16, 2006.

Instead, Rivera blew his second straight save opportunity and his fifth since August 7: Will Middlebrooks tied the game with a solo homer in the top of the ninth. The Yankees recovered and walked off on a wild pitch by Brandon Workman in the home half of the frame, barely dodging the brooms in a series in which even a speck of quality pitching might have earned a split.

Girardi’s club scored eight runs on Thursday, eight more on Friday, and nine on Saturday. The Yankees found their way out of an early hole dug by Ivan Nova and Preston Claiborne in the opener, but could not seal the deal in extra innings after Rivera coughed up an 8-7 edge in the ninth. In game two, Phil Hughes, Claiborne, and Joba Chamberlain squandered a big early lead in relief. And in Saturday’s matinee, David Huff and emergency call-up Jim Miller were battered for 12 runs in 4 2/3 innings. The Yankees scraped across nine runs to turn a rout into a respectable defeat, but they made some dubious history in the process.

New York became the first American League team to drop three consecutive home games despite scoring eight or more runs in each of them. The loss of David Robertson (shoulder tendinitis) and Boone Logan (elbow injury TBD) during the series left an already shaky pitching staff shorthanded, and Matt Daley and Miller, asked to come to the rescue from Triple-A Scranton/Wilkes-Barre, weren’t up to the task. Huff, who replaced Hughes in the rotation for Saturday’s game, showed promise in earlier relief assignments, but dashed any hope that he could solidify the back of the rotation in his first try as a starter.

On the other side, Mike Napoli went 7-for-13 with three home runs, delivering a grand slam on Friday and two big flies on Saturday. Shane Victorino drilled a couple of taters, one each on Friday and Saturday, bringing his total for the season to 14. And Xander Bogaerts cranked his first career homer—a true long ball, 443 feet over the visitors’ bullpen in left-center field—amid the drubbing in game three.

With three wins in four games, the Red Sox left the Yankees 2 ½ games (three in the loss column) behind the Rays for the second wild card spot. The Indians and Orioles are a half-game ahead of the Yankees, and the Royals are a game behind them. Tampa Bay has sputtered, leaving that spot for the taking, but none of the other contenders has stepped up to seize it. Even with the offense doing its part, those 2 ½ games will be tough for the Yankees to bridge unless the pitching staff comes around.

Defensive Play of the Weekend
Ichiro Suzuki might have come up short in his bid to rob Napoli of a grand slam on Friday, but he earned his own spot on the highlight reel on Saturday afternoon:

Meanwhile, Mike Trout doesn’t need to be in center field—or to have an outfielder’s glove on—to make a great catch. A batting glove in the on-deck circle works just as well:

You need to be logged in to comment. Login or Subscribe
timber
Royals and Indians will be playing at Progressive Field in Cleveland, not at Kauffman.
Reply to timber
bornyank1
Fixed.
Reply to bornyank1