Last Friday, Seattle baseball fans were treated to the long-anticipated arrival of pitching prospect Taijuan Walker. The right-hander entered the season as the top prospect in the Mariners' system, and he ranked ninth overall on Jason Parks' mid-season list of the top 50 prospects in the game, placing third among pitchers (behind Archie Bradley and Kevin Gausman).

Walker has maintained a strikeout rate of better than 10 batters per nine innings across Double-A and Triple-A this season, essentially matching the K rate that he had established throughout the minors, but his walk rate escalated during his trip through the Pacific Coast League. Walker's 8.8 percent frequency of free passes in the Southern League this season was the best mark of his minor-league career, providing optimism that he was fixing the greatest flaw on his stat sheet, but the walk rate bounced up to a career-high of 11 percent in the PCL.

Standing at six-foot-four and 210 pounds, the young Walker is an imposing presence on the mound, making it easy to forget that he turned 21 less than a month ago. He is younger than many of the players who will be drafted next June, yet he carries an advanced repertoire that could allow him to make a quick impact at the big-league level.

The Mariners chose a low-pressure environment for Walker's introduction to the show, starting him on the road against the cellar-dwelling Houston Astros. The paid attendance was under 14,000, with many of those fans choosing to stay home, based on the plethora of empty seats around Minute Maid Park. The setting created an almost minor-league feel to Walker's debut under the spotlight.

The rookie had an easy ride in the first inning, setting down the top of the Houston lineup in order. He threw seven of 12 pitches for strikes, but his command was very shaky, which is to be expected for any pitcher making his debut in the major leagues. On the plus side, many of his misses were fastballs located under the strike zone, and all but one offering fell within the lateral borders of the dish. Pitchers with high release points often struggle to get the fastball down, but Walker demonstrated that this would not be an issue on the first pitch of the game.

A pair of first-inning pitches caught too much plate, but the Astro hitters could muster only weak contact. Walker had an even smoother trip through the second inning, requiring just eight pitches to retire the middle of the lineup. Houston catcher Jason Castro led off the second frame, and Walker needed just three pitches to dispose of the receiver for his first major-league strikeout. It was an impressive sequence of pitches, starting with a fastball up in the zone that was called for a strike, followed by a steep 71-mph curve that Castro took for strike two. Seattle catcher Henry Blanco decided to forgo the traditional waste pitch on 0-2, lifting out of his crouch to ask for another high fastball, and though Walker missed the target to the arm-side, he was able to generate the desired height and invite a late swing for the punchout.

The right-hander started the third inning with excellent command, painting targets with fastballs and cutters versus Brandon Barnes, but Walker lost his release point just as quickly as he had found it due to inconsistencies with mechanical timing. He battled to find his location for the rest of the inning, trading the occasional well-placed pitch with those that were either over- or under-rotated. The Astros finally broke through for their first hit with two outs in the third, when Jonathan Villar lined a pitch deep to left field for a double off the base of the wall.

The first-pitch fastball to Villar was intended to be low and away, aimed at the number nine on the strike-zone keypad, but Walker's offering drifted back over the number eight near the bottom of the zone. At 94 mph on the lower shelf it was still a tough pitch to knock, particularly for a light-hitting shortstop, and Walker had escaped more egregious misses through the game to that point. Villar came around to score when Justin Smoak was unable to handle the throw on a would-be 6-3 groundout that should have ended the inning, putting the Mariners in a 1-0 hole. Walker would also surrender a single to L.J. Hoes before escaping the frame, but it was the last hit that the Astros would be able to muster against the Mariner phenom.

Walker threw 22 pitches in the third inning, after it took just 20 tosses to record the first six outs. After mixing his pitches for the first two frames, Walker essentially abandoned his curveball in that third inning, preferring to sit on fastballs, cutters, and the occasional change. He may have simplified his approach in order to find the strike zone, but the Houston hitters were able to sit on pitches in the 88-95 mph range, although Walker also spiked his three hardest deliveries of the game with a trio of pitches that broke 97 mph in the third inning.

The curves returned in the fourth inning, and Walker got back to the task of retiring Astros. Jason Castro became a strikeout victim for the second time of the game, once again whiffing on a misplaced fastball to lead off an inning. It took five pitches for Walker to K Castro for the second time, starting him with a changeup in the upper zone for a called strike, and Walker set up the strikeout with an inside curve before overwhelming the catcher with a 96-mph fastball that badly missed its intended destination.

The right-hander also walked his first batter in the fourth inning, giving away first base to Brett Wallace in an eight-pitch at bat that was loaded with missed targets both in and out of the zone. Five of the eight pitches to Wallace were fastballs, four of which caught too much plate, and the only secondaries that were offered finished too far outside the zone to be effective. Walker escaped the inning without damage, but the Wallace plate appearance revealed that the nascent Mariner was far less effective than the stat line suggests.

Walker needed just 11 pitches to finish the fifth, which would be his last inning of the day. The highlight of the final frame came when Villar attempted to reach base on a one-out bunt to the third-base side, and Walker bounded from the mound to make an excellent play and a strong throw to nail the speedy shortstop. For the scouts in attendance, it was an ideal showcase that the kid can handle his position.

The M's pulled Walker with just 70 pitches under his belt, not wanting to unnecessarily tax their prize prospect at the end of his longest season as a pro. He finished with a clean ERA, having allowed just three legitimate baserunners and the lone unearned run. The only statistical downside was the paltry pair of K's, with Castro serving as a two-time victim.

Walker has the raw stuff to rack up strikeouts at the highest level, but his inability to find targets put him at the mercy of the opposing bats throughout the contest. The single walk is a poor reflection of his overall pitch command in this game, though Walker did have a number of deliveries that were lined up perfectly.

Walker does a great job of keeping the fastball down when he does find his release point, which is a rare trait in a young pitcher with such a tall trajectory, and the combination results in excellent downhill plane. He also displayed an affinity for dropping the curveball over the plate, and the pitch is sharp enough to generate called strikes with an 0-1 count.

His delivery was literally hit-or-miss in his debut, and the downside of such inconsistency was exposed in Walker's follow-up start against a superior Kansas City offense. Once again, Walker struck out only two batters over five frames, and both of those K's came in the first inning of his match-up with the Royals. But Walker's timing fell apart in a four-run fourth inning, which started with a walk before KC unleashed the bats with four hits in the span of six batters, the irony of which was that the hardest-hit baseballs were those that resulted in outs.

I have been tracking Walker's mechanics for a while, and have written about him in this space a number of times. I first covered him last season, based on his one-inning appearance in the 2012 Futures Game, and I walked away extremely impressed with his delivery. I followed up with an in-depth look over the offseason, breaking down a mid-summer start that he made for Double-A Jacksonville, wherein the impressive mechanics were on display despite a rough result in the box score.

I also covered Walker in this year's Futures Game, and despite the statistical improvement to that point in the season, I was less than pleased with the mechanical adjustments that he had made in the interim. Walker had added a minor pause in his momentum along with a slight twist near maximum leg lift, a strategy that looked like a combination of Felix Hernandez's corkscrew method and the exaggerated halt of Hisashi Iwakuma, and delving deeper into Walker's minor-league footage revealed that the strategy was not a one-game fluke.

In his debut, Walker's mid-stride pause appeared to be even further entrenched, and the ripple effect on his timing was intertwined with the frequency of missed targets. I am still impressed with his first gear, which features a strong move toward the plate, but the right-hander slows things down as he exits maximum leg lift, and the extra time that it takes to execute the stride phase opens up the window of opportunity for his timing to fall off-track. He is also inconsistent with the second-gear momentum, further exacerbating the timing issues.

Walker has excellent balance and plus posture that continues to improve, which combines with his naturally-elevated angle of shoulder abduction to please both coaches and scouts by creating downhill plane while maintaining the stability necessary for a consistent arm slot. The only missing ingredient is timing, and though the mid-stride halt creates a barrier to repetition, it is worth repeating that Walker is just 21 years old and that repetition of mechanical timing is often the last element to come around for a developing pitcher.

Walker left one final impression in his debut. The 21-year old rookie has considerable ink on his arms, the highlight of which is an inspiring message that any baseball junkie can appreciate: “Play every game like it's your last.” 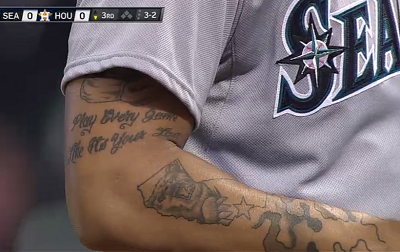 You need to be logged in to comment. Login or Subscribe
jfranco77
The ultimate believer in TINSTAAPP - he has â€œPlay every game like it's your last" basically tattooed on his UCL.
Reply to jfranco77
mrgriffey
Thanks Doug. Very informative - great work!
Reply to mrgriffey
hyprvypr
Great work but clearly shows the difference between Walker, a very good prospect with some nice upside and the young Jedi that Felix Hernandez was early in his career with much better command and stuff and at an earlier age to boot.
Reply to hyprvypr
HPJoker
Is it just me, or does Walker's delivery look a lot like Tyson Ross'?
Reply to HPJoker