The Thursday Takeaway
According to general manager Walt Jocketty, when Johnny Cueto—who has been on the disabled list since June 29 while recovering from an aggravated lat strain—is ready to return to the Reds, he will do so as a reliever. Jocketty’s rationale for that plan, which could span the rest of the season, is that there aren’t any active minor-league affiliates with which Cueto could complete a step-by-step rehab assignment, stretching out his arm from start to start.

That puts the onus on the Reds’ five current starters, who have held down the fort for much of the summer. One of them, Tony Cingrani, spent two weeks on the shelf with a lower back strain, but returned to face the Cardinals in the series finale last night. He looked no worse for the wear—on the mound, at the plate, and on the base paths.

Cingrani took advantage of a St. Louis lineup that has struggled to hit left-handed pitching all season, working 5 1/3 innings of two-run ball, over which he permitted four hits and three walks while collecting seven strikeouts. Under different circumstances, the 24-year-old might have pitched deeper into the contest, but he uncorked a wild pitch and walked a batter in a wild sixth inning, leading Dusty Baker to turn to Zach Duke with Cingrani’s pitch count at 79.

By that point, the Reds had already done ample damage to Cardinals starter Lance Lynn, who departed after five frames and was charged with four runs on seven hits. Todd Frazier, Shin-Soo Choo, and Jay Bruce all went deep against Lynn, who also threw a wild pitch and walked four batters, needing 102 pitches to record 15 outs.

That wild pitch occurred during a rather bizarre sequence in the bottom of the second inning, which began innocuously with a fly out by Zack Cozart and a ground out by Ryan Hanigan. Before we go any further, a quick reminder: The Reds player in question here is Cingrani, not Billy Hamilton.

With the count at 0-1, Cingrani, a left-handed hitter, placed a drag bunt between first baseman Matt Adams and second baseman Matt Carpenter and beat Lynn in a footrace to the bag. Then, with an 0-2 count on Choo, he took off for second and beat the one-hop throw from backup catcher Tony Cruz. Lynn’s payoff pitch to Choo skipped into the batter’s box and past Cruz, and Cingrani scampered over to third. He scored on an infield single by Brandon Phillips—a grounder into the 5.5 hole that Ryan Jackson fielded but could not convert into the third out.

Need video evidence of all of that? Here it is—proof that Cingrani is healthy and ready to help the Reds, who are now 1 ½ games behind the Cardinals for the right to host the wild-card playoff and three games behind the first-place Pirates in the Central.

Quick Hits from Thursday
Beat writers covering game one of four between the Red Sox and Yankees were wearing out their “delete” keys last night, as the storylines in the Bronx changed by the hour—and sometimes more often than that.

For six innings, the story was a strong outing for Jake Peavy and a rough one for Ivan Nova, whose struggles were compounded by the subsequent implosion of Preston Claiborne. But then, with the Red Sox up 7-2 in the home half of the seventh, Peavy began to unravel, and his bullpen wasn’t there to help, either.

Ichiro Suzuki walked, Vernon Wells singled, and that was it for Peavy, who gave way to Matt Thornton with the left-handed-hitting Brett Gardner due up next. Gardner singled, Wells stole third, Derek Jeter walked, Robinson Cano grounded into a run-scoring force out, and that was it for Thornton, who turned it over to Junichi Tazawa with the right-handed-hitting Alfonso Soriano due up next. Soriano singled, Curtis Granderson doubled, and—after Alex Rodriguez struck out with the Red Sox lead down to 7-6—Lyle Overbay drove in the tying and go-ahead runs with a single. Ichiro, up for the second time in the inning, struck out, but the damage was done: the Yankees were ahead, 8-7.

The eighth inning passed quietly, and Mariano Rivera recorded the first two outs of the ninth without a hitch. But then Mike Napoli singled, pinch-runner Quintin Berry stole second, and Stephen Drew sent Berry home with a flare that knotted the score at 8-8.

Craig Breslow, who pitched the eighth inning for the Red Sox, stayed in for the ninth and retired Cano on a line out. But he walked Soriano, and Soriano stole second—the sixth theft of the day for the Yankees, who had only swiped that many on 13 occasions since 1916, as far back as Baseball-Reference’s Play Index goes. That might have been the story, had the Yankees found a way to bring Soriano home with the winning run. Except… Soriano did this, which led Joe Girardi to make this face, and our own Dan Brooks to tweet this.

Girardi gave the ball to Joba Chamberlain in the 10th inning, and the right-hander got Will Middlebrooks to fly out to open the frame. But then Jacoby Ellsbury singled and stole second, and Shane Victorino—still batting right-handed against righties, and still reaping the rewards with a home run earlier in the game—singled him home to put the Red Sox back on top, 9-8.

Mercifully for the beat writers, Koji Uehara is just about automatic these days. A pop out and two strikeouts took care of Rodriguez, Overbay, and Suzuki to give the Red Sox the game-one victory.

After four hours and 32 minutes, and a whole lot of deleted words, the eyes in both clubhouses turned to the West Coast action, by then well underway. The Orioles beat the White Sox earlier in the day, but the Angels downed the Rays and the Astros upset the Athletics, so the Yankees ceded ground to only one of the other American League wild card hopefuls. Oakland is 2 ½ games ahead of Tampa Bay, which is 2 ½ games ahead of New York, which is a half-game up on Baltimore, which is tied with Cleveland heading into the weekend. Boston’s division lead grew to 6 ½ games over Tampa Bay.

At the end of the 13-inning, four-hour-and-17-minute matinee between the Mariners and Royals, in which the teams combined to throw 417 pitches, the story was Mike Moustakas’ walk-off homer, served up by Chance Ruffin, who looked sharp in his return to the majors before that mistake. But the fans who enjoyed an extra hour of free baseball might have filed out of Kauffman Stadium much earlier were it not for a curious decision by Royals closer Greg Holland.

Handed a 6-5 edge in the top of the ninth, Holland was as nasty as ever, pairing high-90s heat with a razor-sharp slider to coax a ground ball from Nick Franklin and fan Michael Saunders. With the Mariners down to their last out, Eric Wedge told Raul Ibanez to grab a bat and hit for Henry Blanco.

Things looked ominous for the visitors after the first pitch: a 100-mph heater that blew right past the 41-year-old’s bat for strike one.

You might think, given that result, that Holland would bring out the gas again later in the at-bat. But the rest of the squares in the above Brooks Baseball plot are red. The next four pitches, all of which were sliders, went for three balls and one strike, filling the count. The sixth offering of the at-bat was the fifth straight slider—and this one was right down the middle. 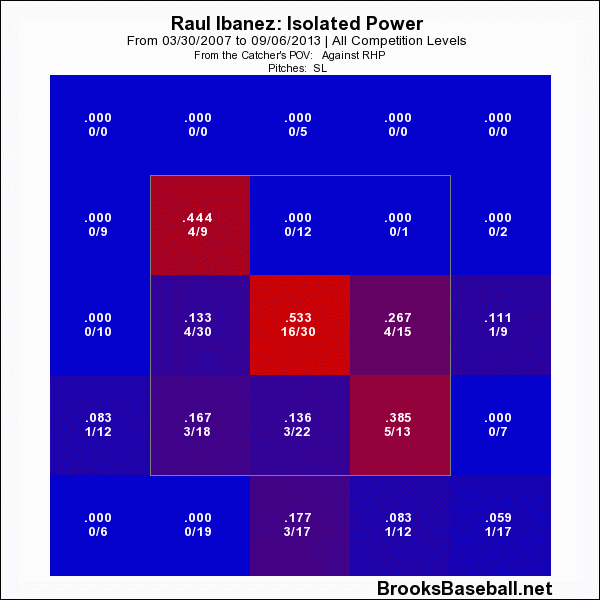 Ibanez’s bat speed isn’t what it once was, but as his 25 home runs entering the game (24 of them in the first half) suggested, he can still hammer mistakes. And as mistakes go, hanging sliders right down Main Street are among his favorites. This one turned into no. 26.

Moustakas washed all of that away on Thursday. But if Holland and Ibanez cross paths again, the righty might want to stick with the cheese.

Defensive Play(s) of the Day
Another day, another gem from the A’s. This time, it’s Sonny Gray coming off the mound to field a chopper and then firing an off-balance throw to Daric Barton, who did the rest:

You need to be logged in to comment. Login or Subscribe
JHaugJr
The game is in St Louis, not Pittsburgh
Reply to JHaugJr
bornyank1
Fixed.
Reply to bornyank1
stevemillburg
Granted, Lance Lynn has been pitching poorly of late. But even he hasn't yet figured out a way to give up seven runs in 6-2 loss. He actually was charged with seven hits but only four runs.
Reply to stevemillburg
statsrath
Thanks for catching that; it's fixed above.
Reply to statsrath
stevemillburg
No problem; a minor glitch in an interesting piece. Frankly, the way Lynn pitched, he may have deserved to be charged with more runs than the Reds actually scored. Not that I'm bitter.
Reply to stevemillburg
timber
Holland often brings out his splitter for lefties; surprised he didn't give it a shot there instead of wringing the slider well dry.
Reply to timber
statsrath
He seems to prefer the slider and fastball to the splitter in two-strike counts (http://www.brooksbaseball.net/tabs.php?player=518813&balls=-1&strikes=-1&b_hand=-1&time=month&minmax=ci&var=usage&s_type=2&gFilt=&startDate=01/01/2013&endDate=01/01/2014), but that would have been an alternative, too.
Reply to statsrath