On Thursday, the best 22-year-old hitter you’ve probably ever seen faced the defending American League Cy Young Award winner and, more recently still, the Cliffliest pitcher in the league. Mike Trout entered the game second in the league in OBP and third in slugging percentage, an almost indefensible hitter who was third in the circuit in extra-base hits and also third in infield hits. In his previous 200 plate appearances, he he had .380/.512/.627. Since late June, his BABIP was .464. Etc. David Price entered the game on a 12-start run (since returning from the disabled list) in which he had struck out 67 while walking only seven, in 89 innings. In that time he threw 71 percent strikes, up from 65 percent in his Cy Young 2012 season.

Or, to simplify: It’s the league’s walk leader against the pitcher with the league’s lowest walk rate. The only thing that could make this matchup any better is if I was eating a burrito while watching. Well, hey, would you look at this….

Previous matchups
Price and Trout faced each other three times in a game in August 2012. Trout didn’t put a ball in play, drawing a five-pitch walk surrounded by two backward Ks. This is particularly notable in that Price is really good at getting backward Ks against righties: 33 of his 83 strikeouts against righties have been looking, including 13 with his cutter and 15 with his sinker, and overall his strikeout-looking rate is nearly double the league average. Says R.J. Anderson, “he's got a very specific formula for dispatching RHB and he never sees lefties really. Once he gets to two strikes against a right-hander he’s able to go away with the cutter or inside with the fastball. Both wind up over the black.” That’s almost exactly what happened when he faced Trout last year. The first plate appearance: 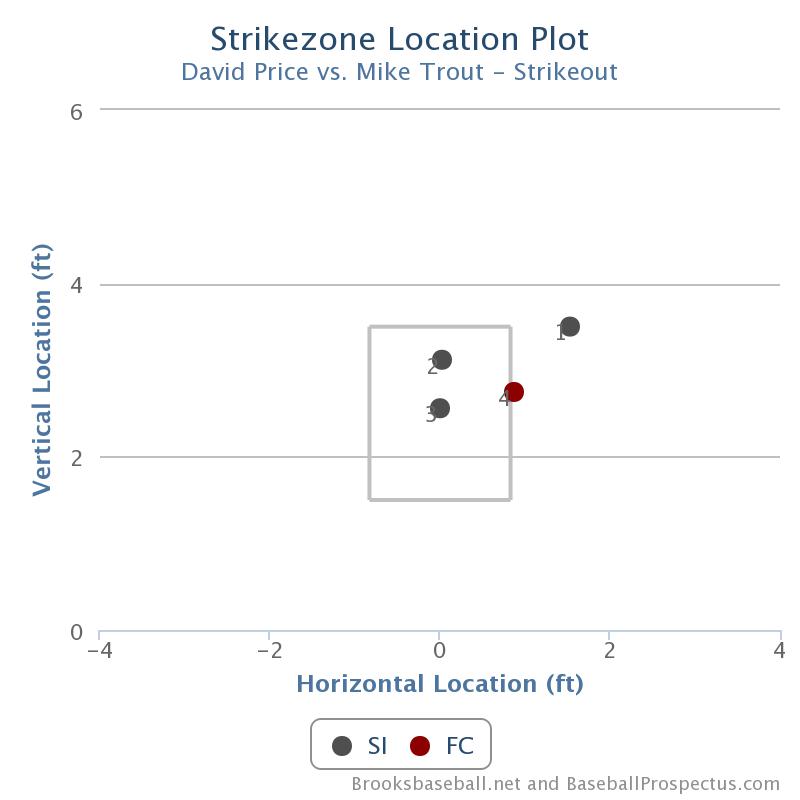 Trout froze on the cutter away. The third plate appearance (after a walk in which Trout never swung): 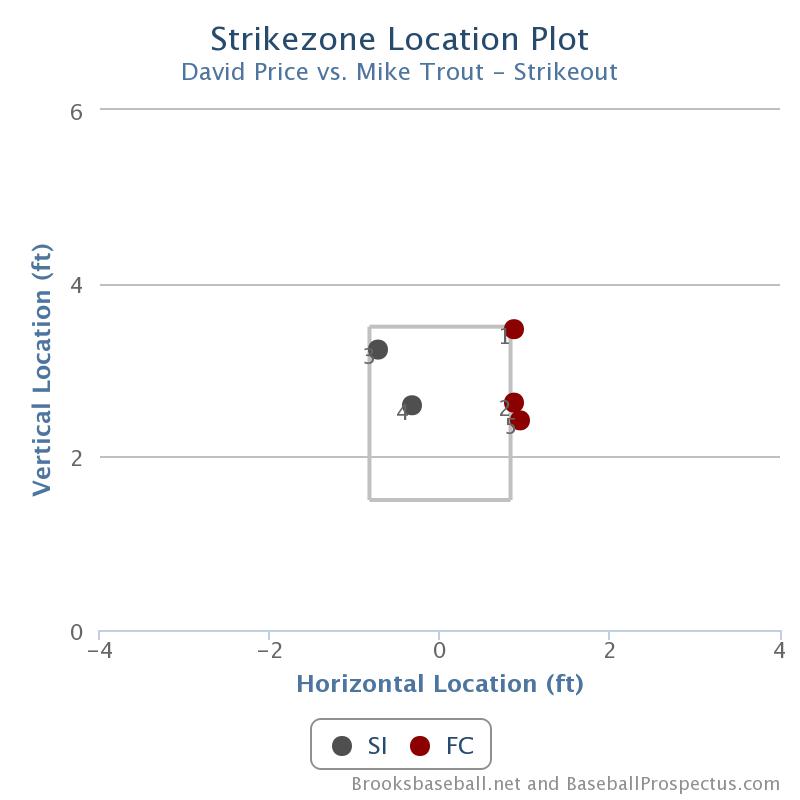 First at-bat
Trout comes up with runners on first and third and nobody out. Trout has batted 65 times in his career with a runner on third and less than two outs, and he’s hitting .488/.462/.902 in those situations. Price starts him with a 95 mph fastball, delivered with a grunt, up and away. On 1-0 he throws a changeup, perfectly in line with the Rays’ pitch-from-behind tendencies. (Price throws the pitch to righties 14 percent of the time, but 21 percent of the time when he’s behind in the count.) Trout has never seen the pitch before, and swings at it even though it’s low and out of the zone.

Price follows it up with a cutter in almost the same location, which Trout takes; Price gets a generous strike call. Now Trout is in that familiar 1-2 count. Price throws neither the cutter away nor the sinker in, though; this time, it’s a four-seamer that just catches the low/outside corner.

It’s impossible to hit, and Trout spends a good amount of time arguing it. Trout has one of the better eyes in baseball, in about the 80th percentile for o-swing rates. He rarely argues, but he argued last year when Price struck him out and he argues plenty on this one. This piece is about Price and Trout, but Jose Molina manages to photobomb it.

Since Price's return from the DL, and before this pitch to Trout, he has thrown 85 pitches to right-handers on 1-2 counts. One of those pitches caught the middle of the plate. 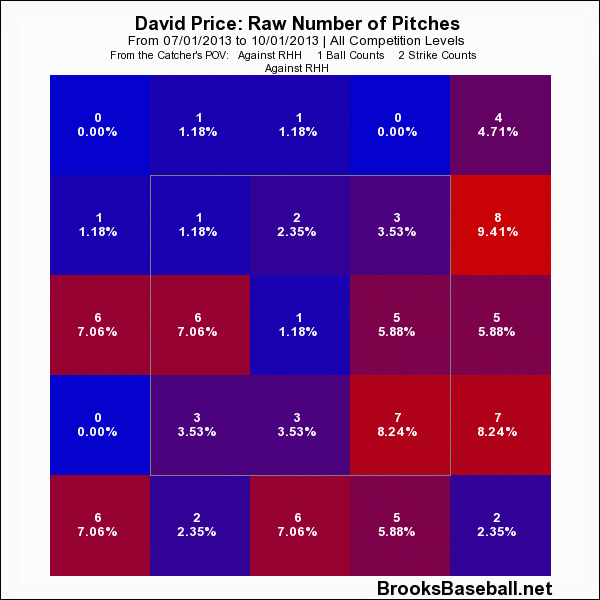 It is very hard to assess command from a pitch chart. It’s not hard with this one.

Second At-Bat
As Trout bats again, Angels announcer Mark “Gubi” Gubicza (the nickname, of course, refers to his love of Danish furniture) suggests that the best way to get a batter like Trout out might just be “slow and slower. Might be your best chance to make him take a bad swing.” Last summer, a scout told me something similar; he said pitching Trout counterintuitively, with changeups inside and curveballs up, might be the only way to take advantage of his quick bat, making it, in essence, too quick. “If you're asking me, I’m not saying it is, I’m saying this may be a way of attacking him, giving him locations so he just lights up but then the pitch is not what he wants. See if he jumps, see if he can be tricked. Hopefully he bites.”

This is obviously not Price’s plan. That changeup he threw in the first at-bat is the first non-fastball he has thrown to Trout in three plate appearances. But in Trout’s second trip Price drops a changeup in for a first-pitch strike, then misses with a fastball up and away, then gets a cutter for a called strike on the outside corner. Another 1-2 count. What’ll it be?

a. Two-seamer in?
b. Cutter away?
c. Four-seamer wherever?
d. Other?

a curveball, low. That’s not too unusual. He throws it about every seventh pitch when he has two strikes on a right-hander, and gets his best whiff rate (perhaps because he throws it relatively rarely). Again, his command with the pitch is uncanny, and you can see that he put it exactly where he wanted to against Trout: 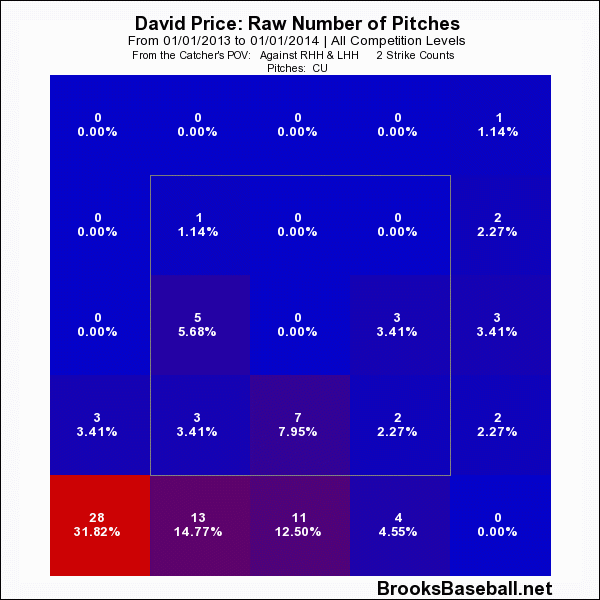 Not being a frequent check-swinger myself, I’m just sort of babbling here, but I can’t imagine there are many batters who can commit that far at a pitch and still hold the swing. Price probably thought he had the punch-out all the way until the last second.

So, on 2-2, perhaps counterintuitively, Price goes back to the curveball, this time making it a little more tempting but still out of the zone low. This time, Trout lashes a line drive single:

I'm trying to decide which classic cartoon slapstick face David Price makes. First I thought he was doing the ol’ Double Take, but skipping the first take and going straight to the exaggerated shock. Then I decided it was the ol’ Frying Pan To The Face. It miiiiight be the ol’ Getting Yanked Off Stage By A Shepherd’s Staff.

Mark Simon and ESPN have had a few good pieces about Trout’s dominance of the low part of the zone, including this one and this one:

Trout was the best hitter in baseball when at-bats ended in pitches to that (lower) area last season, leading the majors in all three slashline stats (.360/.394/.608).

Nonetheless, the league has worked him even more consistently low in the zone this year, as Price did. The thought process of this pitch was sound. In his career, Trout had seen exactly 50 curveballs that were over the plate but out of the zone low. He had swung at 23 of them, far more out-of-zone swings than he typically makes. His whiff rate was higher on those pitches, his batting average lower. Scouting report: Will chase junk out of the zone low. Good scouting report. Just didn’t work out, because he’s super good.

Third At-Bat
Price enters the fourth inning having given up six runs and having thrown almost 70 pitches. After two quick outs he just wants to get back into the dugout after a nice, pitch-efficient frame. But he doesn’t locate anything well, falls behind Trout, tries a curve and tries a changeup to find something that works, and after a first-pitch strike he never gets all that close to the zone. Trout walks without swinging.

Fourth At-Bat
Amazingly, there is a fourth at-bat, because after walking Trout in the fourth inning Price sets down the next eight batters in order on just 21 pitches. So he’s still out there to face Trout in the seventh, and this one goes deep.

It’s a changeup inside, and it’s awful, but shoot maybe that scout up there was onto something after all; inside changeup in a fastball location in fastball count, and he misses it. Trout: “Ooooh.” Price: “Ooooh.”

Now even again, Price aims to freeze him on a cutter away yet again, but he misses and the count is full. He tries to hit the outside edge once more but with a harder fastball, and puts it where he wants to,

but Trout fouls it off. Trout covers it so well that you almost don’t notice that it might have actually been a ball, or close to it. Clearly, Price isn’t going to be able to freeze him there again. So he goes further outside,

and this one is well outside but Trout still reaches it. And so, for the first time since last August, Price tries the pitch that he loves to throw to right-handers but that didn’t work in similar situations against Trout a year ago: the fastball inside.

Maybe the call was generous, but Trout’s reaction to the location tells you how little he expected to see the pitch there. It beat him badly, and Price got the call.

So what we learned: Price's command is insane right now. Trout's plate coverage is, too. And the best way to beat him probably has nothing to do with the pitches you throw, but rather the catcher you throw them to. Updated Price/Trout standings: 1-for-5, two walks, four strikeouts looking, and a stolen base. Not bad, considering Trout might be the game’s best hitter. Not bad, considering Price hasn’t really made but one or two mistakes in the zone.

You need to be logged in to comment. Login or Subscribe
surfdent48
It's amazing how often Rays pitchers get generous calls because of their great catcher. And this is very significant in aiding these pitchers with their success.
Reply to surfdent48
tannerg
I've said it before, but I'll say it again -- This is why I subscribe to BP. This is also why I can't understand why everyone doesn't subscribe.