If your Creator or your chromosomes or whatever combination of the two you deem responsible for such things didn’t make you short enough to play shortstop, then you just have to get that short yourself.

That’s Xander Bogaerts’ key to being a tall shortstop. The superb Red Sox prospect and rookie big leaguer is listed at 6’ 3”, claims 6’ 2”, and realizes that when he’s at the position, he has to act like he’s 5’ 9”.

“Make sure you’re always low and in a good position to field the ball because shorter guys are low to the ground,” Bogaerts said. “Maybe for some taller guys it’s difficult, but I have no problem at all.”

Bogaerts, to a lesser extent than Manny Machado in Baltimore, is partially biding his time at third base for now, and is still ticketed for the shortstop position. He is part of a growing list—in the more literal sense of growing—of taller players manning that position.

Of the 18 qualified players this season who have played a majority of their games at shortstop—a group that doesn’t count Bogaerts, Machado, or the 6’ 3” Troy Tulowitzki and Derek Jeter—a third are listed at 6’ 2” or taller, led by 6’ 3” Ian Desmond. And the 6’ 2” list includes Andrelton Simmons, the consensus pick as the best defensive shortstop in the league.

So how did we get here? Former minor league middle infielder and current Red Sox infield guru and third base coach Brian Butterfield traces the lineage back to the 1980s.

“I think that Cal Ripken was the start of bigger shortstops, then came A-Rod, then came Jeter,” Butterfield said. “And the game became a little bit more offensive so there wasn’t as big a concern for guys who were 6’ 3”, 6’ 4” as long as they could play good enough defense and swing the bats.

Ripken is a standard-bearer in more than one way. Not just as the patriarch of this lineage, but at a 6’ 4” official listing, the Hall-of-Famer is the tallest player ever to be a regular at shortstop. He may not stand alone for long.

Carlos Correa was probably closer to a true 6’ 3” when the Astros picked him no. 1 overall in 2012. Before the ink had even dried on the pick, general manager Jeff Luhnow acknowledged the possibility that Correa might be ticketed for third base. It’s been speculated for almost anyone of considerable height who plays shortstop, because although the last generation or so has proven that the position can be played from significantly above six feet, there are still disadvantages to doing so. Bogaerts has gotten plenty of that talk, and Butterfield understands but dismisses it.

“When I look at range, I look at not only the ability to go get the ball, but also the ability to contort your body and get your feet down and get the ball in the air quickly and accurately,” Butterfield said. “There’s a lot that does go into it, and that’s why there is a concern about that longer body.

“In our case, the guys that we’re talking about are all good athletes, and Xander’s a good athlete, and I think he’s going to be a big-league shortstop.”

As for Correa, the Astros are still planning for a career at shortstop. Oh, and he’s grown. He was 17 when he was drafted, and after doing what 17-year-olds are known to do, now stands a very true and solidly built 6’ 4”. (Bogaerts said he has put on about three inches and considerable weight since he signed as an international amateur as well.)

The Astros organization is paying plenty of attention to Correa’s defense in his full-season debut at low Class A Quad Cities. Former Astros shortstop Adam Everett, on a short list of the best defensive players of the 2000s, is the club’s roving infield coordinator and has taken to mentoring Correa at the position. He recognizes another must for a big guy in addition to being low enough—that quick first step.

Everett is the one who is approximately average height for a shortstop at an even 6’ listing. While there’s been some upward trajectory in that number, it hasn’t been a smooth climb.

Using a standard of 81 games played at the position (or an estimator of half the games in strike-shortened years), our Rob McQuown gathered data on heights of shortstops over time. The search began in 1962 when shortstop height was an average of five feet, 11.16 inches—a number that’s the second lowest of the last half-century to only 1974’s 71.15 inches.

While 2011 and 2012 are not surprisingly two of the eight years when shortstop height averaged over six feet, it actually peaked in 1995. Shortstops averaged six feet, 0.43 inches that year thanks in part to Ripken’s still being there but also a rare full season from 6’ 2” Benji Gil and a last gasp at shortstop from Wil Cordero before that ended quickly with a -12.0 FRAA.

This growth chart shows how shortstop has evolved compared to second base and third base. What we see is a separation since the 1960s, when the three were almost indistinguishable in terms of height. Third base has grown significantly into the power position that it has become, perhaps aided by too-tall shortstops, and shortstops have grown somewhat while second basemen remain basically as small as they were 50 years ago. 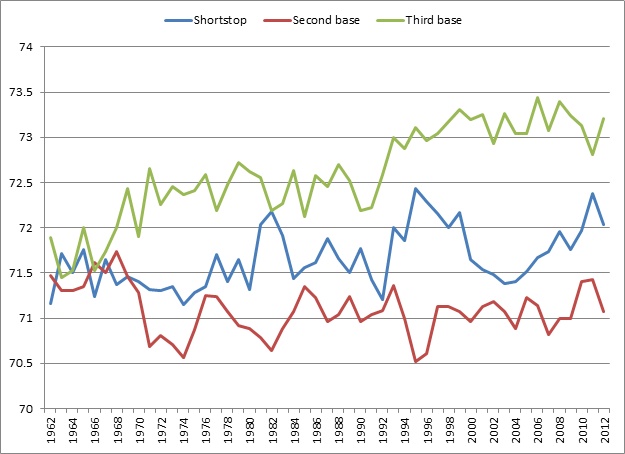 Shortstops have been mostly growing for the last decade or so, especially at the top. Of the 33 players 6’ 2” or taller to play 500 games with a majority at shortstop, eight have debuted in the last decade despite the longevity requirement of that stat.

And the next generation makes it seem like this average of greater than six feet may remain. The 13 shortstops on Jason Parks’ offseason top 101 prospects list average 72.92 inches tall, which—with Machado likely moving to shortstop under a different roster construction—ought to lead to new highs.

The game is anecdotally more open to tall shortstops now, and while Bogaerts, Machado, and Correa still need to have their organizations’ plans turned into action, they’re the likely leaders of the next height spike at the position.

You need to be logged in to comment. Login or Subscribe
Eminor3rd
I just want to thank you for using the word "literal" correctly.
Reply to Eminor3rd
zacharylevine
My heart literally jumps out of my chest when somebody uses it incorrectly.
Reply to zacharylevine
walrus0909
It seems like there was a sudden divergence in the late 60s. Wonder what was behind that.

I also wonder how much of the drop in 2B height in 2012 was caused by Jose Altuve.
Reply to walrus0909