Before we saw Gerrit Cole pitch in the big leagues, the scouting reports all told a similar story. “Has yet to dominate despite three well above-average offerings,” Jason Parks wrote when ranking him as the Pirates’ top preseason prospect. “Still needs refinement to reach extreme ceiling.”

“Has ingredients to be a no. 1 starter but something is holding him back,” Mark Anderson said after seeing him in May. A few days later, Zach Mortimer acknowledged that Cole’s Triple-A stats didn’t quite match his stuff but offered an optimistic take that a promotion to Pittsburgh would make “the light switch…go on.”

It wasn’t immediate, but Cole may have started to flip that switch. The 22-year-old struck out 47 batters in 68 innings in Indianapolis to start the season, and only 11 in his first four starts and 24 innings in the majors. He wasn’t walking guys, and he was getting grounders, but the lack of strikeouts were of some concern. The right-hander—who earned consideration for both top fastball and top slider on our preseason list of the best pitches in the minors, and also showed a changeup with plus potential—was effective, but he wasn’t missing enough bats to be dominant. In retrospect, maybe all he had to do was rearrange his repertoire. 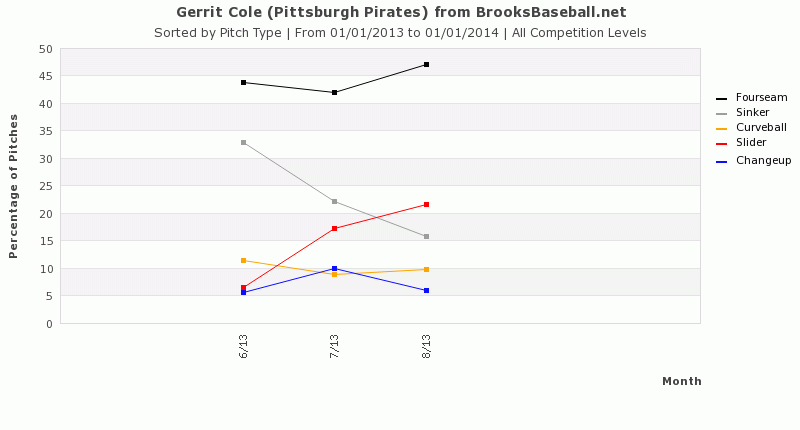 As he’s settled into the Pirate rotation, Cole has backed off his sinker and relied more heavily on his two best pitches, upping his usage rates of his four-seamer and slider. His strikeout rate has risen along with them. Since the start of July, Cole has fanned 55 in 67 innings (including five Brewers in six frames on Tuesday), just a smidge over the league-average strikeout rate for an NL starter. His slider has an above-average whiff rate, and according to Harry Pavlidis—who’s been investigating what makes changeups tick—his change falls closer to the whiff side of the spectrum than the grounder end. That gives Cole at least two present pitches that can miss bats, and he’s clearly more comfortable throwing one of them than he was when he came up.

Though it’s tied with Nathan Eovaldi’s for the hardest among starters, Cole’s four-seamer has not been a swing-and-miss offering. It has, however, been one of the best at generating grounders on balls in play. If he wants to miss even more bats, Cole could try throwing more pitches outside of the strike zone, which is the opposite of the trend he’s followed so far. 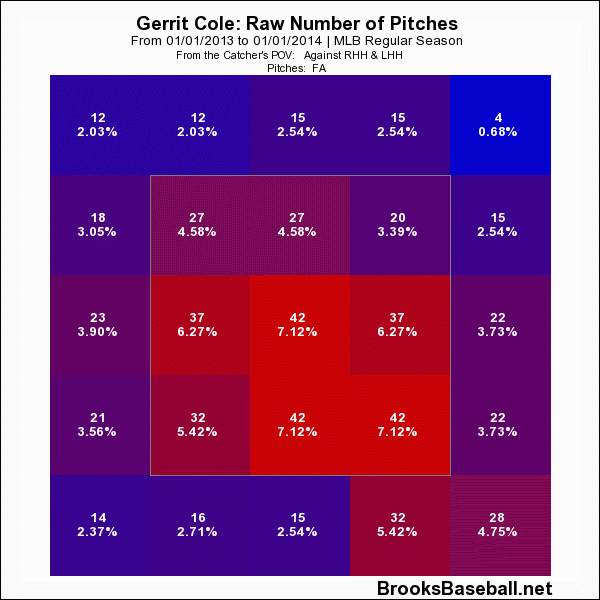 To this point, Cole has pounded the bottom of the zone with his heater, but he has the velo to go up the ladder for whiffs without getting burned. For now, though, pitching to contact isn’t a bad strategy for a Pirates pitcher, since some combination of good fielders and smart defensive positioning has made Pittsburgh one of the best defensive teams in baseball.

Cole could have been an asset to the right team at the right time as a groundballing workhorse who didn’t walk anyone. But to take a step toward attaining the acehood that was forecasted for him, he needed to show, sooner or later, that he could get outs on his own. It hasn’t taken him long.

As Bill James put it in The New Historical Abstract, in his explanation of why high-contact pitchers tend to have shorter careers:

You have heard it said many times, I am sure, that baseball is a game of adjustments. Well, the strikeout rate is on index of a pitcher’s room to maneuver in making those adjustments.

The pitcher who doesn’t get strikeouts may be very successful for a short time, but he is walking a fine line.

Cole’s early improvement is just the latest sign that he’s going to be a good one.

You need to be logged in to comment. Login or Subscribe
warpigs
Good stuff, Ben.
Reply to warpigs
SixToolPlayer
His slider has also gotten more sweep in the last few weeks. Perhaps this is all just part of a series of adjustments to the big leagues.
Reply to SixToolPlayer