Earlier this year, I wrote an article about internet commenters' attempts to concoct trades for Giancarlo Stanton. The Marlins right fielder had reportedly been put on the block, and while the price in prospects was believed to be steep, not even fans of the organizations with the worst farm systems were willing to concede that their team couldn’t get a deal done. Every fan base, it turned out, had at least one blogging, tweeting, or commenting member who didn’t see any problem putting a persuasive package together. “Ultimately,” I concluded, “we’re all convinced that we’re above-average drivers, and that we’re better looking than we actually are, and that our teams would have no trouble trading for Stanton.” In reality, of course, we can’t all be above average at anything, and most of the proposed trades were preposterous. Stanton is still in Miami.

Rooting for baseball teams isn’t a totally rational activity, so it shouldn’t come as a surprise that some of the people who do it are laboring under a different delusion. This one, almost as widespread as Stantonitis, pertains to what Cliff Corcoran once dubbed “getting URPed”—shut down or beaten by an Unfamiliar Rookie Pitcher. Over the past nine-plus seasons, rookie starters, in close to 40,000 innings, have posted a 4.76 ERA. Non-rookie starters, in over 240,000 innings, have recorded a collective 4.30. Veterans have outperformed rookies in every season from 2004 through 2013, so clearly someone has to be hitting rookie pitchers. But you can find a fan of (almost) every team who’ll tell you that it must be someone else.

What follows is an effort to catalog the internet’s belief in the inability of any team to touch rookie pitchers. To save space and time, I’m going to go one deep down the line, but it would be easy to come up with multiple examples for most clubs. Click on team names to be taken to the source, and click on any images that aren't clear to expand them. At the end of the exercise, I’ll tell you whether what these commenters believe to be true of every team is actually true of any of them.

(Even Phillies beat writers believe it!) 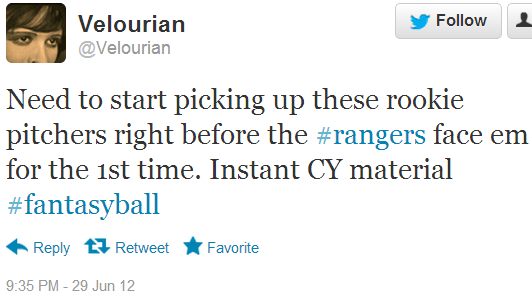 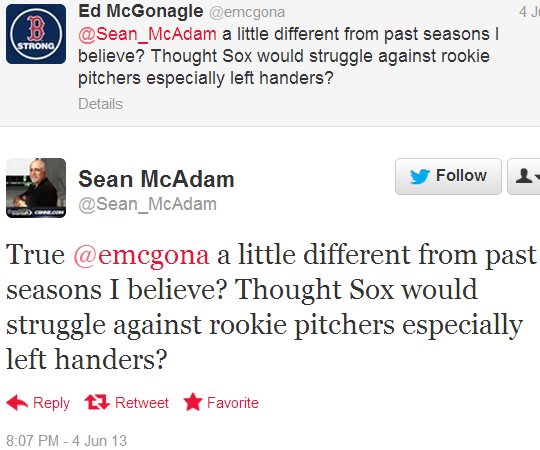 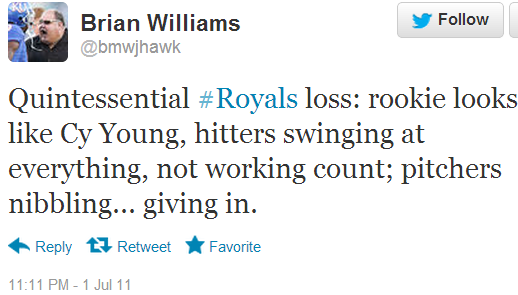 You probably noticed a handful of teams without entries: the A’s, the Mariners, the Marlins, the Rays, and the Rockies. There may be similar laments about each of these teams lurking somewhere on the internet, but I couldn’t uncover them. The A’s and Rays have had such a profusion of rookie pitching on their rosters that it’s tough to find a rookie-related story on them that isn’t about their own arms. The Mariners have scored runs off of non-rookie pitching at the major leagues’ lowest rate, so any struggles they’ve had against rookies have been pretty much par for the course. The Marlins have fewer fans and more problems than most teams, and the Rockies have no cause for complaint: they’ve crushed rookie starters to the tune of a 5.57 ERA, 123 percent higher than the mark to which veteran starters have held them. No other team has had a bigger differential in rookie/non-rookie offense over the past decade.

Anecdotally, a few teams seem to generate a disproportionate number of comments about performance vs. rookie starters. The Brewers, for instance, have a long history of this, though, their performance against first-year starters is pretty typical. But in sheer volume of posts, tweets, and comments, no other teams can compare to the Mets and Yankees. Maybe this is because they’re in the biggest market and have among the most fans, but in the Yankees’ case, at least, there might be more to it.

Only two teams have hit worse against rookie starters than non-rookie starters from 2004-13: the Tigers and the Yankees. It’s close—rookies have a 5.08 ERA against the Yankees, compared to 5.14 for non-rookies—but given the typical split, you’d expect something close to 5.70. Whether this reflects something real or randomness, it has not gone unnoticed by fans, columnists, and even managers in the New York market (which is why I’m aware of the meme). You can find the results for all teams here.

So if almost all teams hit better against rookie starters, why the widespread, persistent belief that each particular team doesn't, and that the best way to guarantee an effective outing is to summon someone from Triple-A? There are a couple causes, most likely: selective memory and overreliance on small samples. We expect rookie starters to get hit hard; when they do, we think nothing of it, but when they don't, it tends to stick in our minds. And when a team does struggle against rookie starters for a short stretch of time, we assume it's an inherent failing: not that a team hasn't hit rookie pitchers, but that it's unable to, and probably always will be. Add in some frustration and the desire to give in to your anger—a good way to get over being beaten by a pitcher you haven't heard of is to vent about it online—and you have a recipe for one of the game's greatest fan refrains.

Thanks to Andrew Koo, Rob McQuown, and Chris Mosch for invaluable research assistance.

You need to be logged in to comment. Login or Subscribe
rawagman
What are the splits for a given pitcher's first ever MLB start? In those, I sometimes expect a good performance, simply as the advance scouting is not to the same depth.
Reply to rawagman
bornyank1
Bret Sayre wrote about that earlier this year.
Reply to bornyank1
SixToolPlayer
Oh yes, I'm well aware of the Yankee meme. It also extends to lefties.

If the Yankees are facing a young lefty, FORGET IT.
Reply to SixToolPlayer
muzia02
Poor Rockies, they get no love :(
Reply to muzia02
ddietz2004
One of the common fan and media complaints in DFW is that the Rangers can never hit well with RISP, and they can only score courtesy of the home run. I wonder if there are similar complaints in other markets?
Reply to ddietz2004
BurrRutledge
Well done.
I like the solution suggested by the Indians fan.
Reply to BurrRutledge
thelifeofbennyfg
This is wonderful.
Reply to thelifeofbennyfg
ceciliatan
Iiiinteresting! I had always heard it as "veteran teams can't hit rookies" so the Yankees and Red Sox were nearly always in that camp, but it's amusing to see everyone thinks their team has the same problem.

It might be interesting to look at the split between rookie debut starts, though, and how they did all year. My surmise is usually that an unfamiliar pitcher has an advantage for a short period of time (sometimes by the third time through the lineup) and sometimes through a couple of starts. But then people figure him out.

The real question though is just the psychological one of how people's expectations, when flipped, leave a lasting impression. Fans feel it reverses the natural order when some unknown pitcher fresh off the farm shuts their offense down completely, therefore it must Be A Thing. They make it out to be a Big Thing. When actually it's not that surprising that unfamiliarity helps the pitcher...for a little while, anyway.
Reply to ceciliatan