You might remember Wladimir Balentien from his age 22-24 seasons, when he hit a combined .221/.281/.374 for the Mariners and Reds, or his age-25 season, which he spent with Triple-A Lousville because he was blocked by the barely passable bat of Austin Kearns. Then again, you might not, because your brain has space for only so many baseball players, and Balentien didn’t make much of a case for inclusion.

He’s making a much stronger case today. Now 29, Balentien is having an insane season for the Yakult Swallows in the Japanese Central League, where he’s spent the past two-plus years. He’s hit .339/.463/.826 with 51 homers in 100 games, and with over 30 games to go, he’s a near-lock to break the single-season record of 55 held by Sadaharu Oh, Tuffy Rhodes, and Alex Cabrera, assuming he stays healthy and gets pitches to hit.

Balentien led the league in homers in each of his first two seasons in Japan, but it took much less eye-popping totals—31, both times—to do it. He happened to arrive just in time to experience two extremely anomalous offensive years, thanks to a less lively ball that was introduced in 2011. 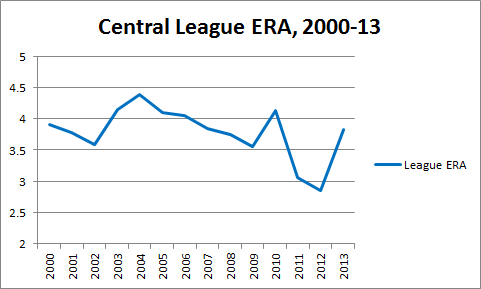 This year, the old ball (or something similar) has been restored, and Balentien’s bat has responded. However, his big numbers aren’t purely the product of inflation—scoring has simply returned to pre-2011 levels, not reached new heights. And no one else in the league is within 15 homers of him, other American exports included.

The question, then—aside from “Will he hit five more homers?—is this: How good is Balentien’s bat, really? No major league team wanted him three years ago, at least not at the price he commanded from the Swallows. None wanted him last winter, when Yakult inked him to a three-year, $7.5 million contract that runs through 2016. Would anyone want him now, if he were available?

I asked a Pro Scouting Director whether Balentien’s NPB line suggests to him that he could hit in the States, and whether the industry would be any higher on his abilities after seeing him mash in Japan than it was before he went there. Sam Miller and I discussed his response in detail on our podcast today, so if you’re the sort of person who’d like to listen to the two of us talk, you can put on your headphones and stop reading right now. If you’re not, I want to share the answer with you anyway:

This is a good question, and I'm not sure that I have a great answer. The general rule of thinking is that the level of play in the NPB lies somewhere between Triple-A and the Major Leagues (though much closer to Triple-A). You're going to be running up against fewer pitchers with mid-90's fastballs, and more pitchers who rely heavily on trick-pitching and changing speeds with breaking balls. That isn't to take away from what Balentien has done, but only to highlight that if he were to return to the states, the walk rate would likely drop precipitously while the K rate would rise. But by the same token, I was convinced that there was no way that Colby Lewis could perfom at the same level that he was at when he was in the NPB, and he certainly proved me wrong, so I wouldn't rule out Balentien being able to provide average value for a Major League team. But I think there would have to be a lot of teams that see Balentien as a viable power bat off the bench, and maybe one or two that would be willing (mistakenly, in my humble) to roll the dice on him as an everyday player.

Ultimately, this is almost certainly a hypothetical scenario, since Balentien is under contract and making good money through age 31. But it’s interesting to note that at least one scouting exec in a position of power still sees Balentien as a borderline big leaguer, even after his historic NPB season. That might seem surprising, since as Sam pointed out, anyone would give a player with Balentien’s line a chance if he’d posted the same stats against roughly equivalent Triple-A talent. And it’s possible that Balentien is a better player than he was in his early to mid-20s—he’s walked more than he’s struck out this season, though that might reflect opposing pitchers’ fear more than anything else. But the specter of Rhodes, who could hardly hold a roster spot in the big leagues before becoming a star in Japan, might still be too strong to make Balentien’s power outburst believable to those who've seen him look like a marginal talent in the majors.

You need to be logged in to comment. Login or Subscribe
MaineSkin
He's in his prime and that's a ton of HR. Would it be so hard to see him follow Napoli's production who's timely hits have made him acceptable in Boston?
I can't stand this, but how do you guys feel about half of the Redsox team having their jersey's half unbuttoned during the game?
Reply to MaineSkin
Eminor3rd
Wladimir Balantien is the type of thing that makes me want to start following NPB occasionally. Seeing fun cast-off names turn into real players is exciting to me for some reason.

Is there a way top watch NPB games without paying a ton of money?
Reply to Eminor3rd
KJOKBASEBALL
Coming back to the U.S. is not just making an adjustment in competition. Colby Lewis, a pitcher, is a terrible example, because pitchers coming back to MLB have the advantages of:

All of these work AGAINST hitters coming from NPB to MLB. Not so much for a hitter like Ichiro but definitely for any "HR Hitter". NPB pitchers like Lewis tend to end up having performance/stats that are not too much worse than what they had in NPB. Batters, especially 'power' guys, end up having MUCH MUCH worse stats when coming from NPB.

Reply to KJOKBASEBALL
Behemoth
Not convinced that Japanese defence would be significantly worse than MLB defence.
Reply to Behemoth
onegameref
Tuffy Rhodes highlight was 3HR opening day with Cubs.
Reply to onegameref
cmaczkow
Didn't Fielder (Cecil) follow this career path to pretty good results, albeit at a slightly younger age?
Reply to cmaczkow
bornyank1
Kind of. But yeah, younger and also had more success in the majors before he went to Japan.
Reply to bornyank1