The Wednesday Takeaway
Even the best pitchers get shelled from time to time, and Felix Hernandez is no exception. The Mariners ace recorded only nine outs in yesterday afternoon’s meeting with the Rangers, who stranded two runners in the first inning and then unleashed a merciless coup that bumped King Felix off his throne.

Hernandez came within one out of leaving two more Texas runners on base in the second inning, but Leonys Martin would have none of that. The center fielder worked the count to 2-1, putting Hernandez into a fastball situation with two on and two away. The right-hander aimed for the outside corner, but his 89-mph sinker stayed elevated over the outer third, leaving him watching helplessly as Martin walloped the offering over the fence in the left-center field gap. Hernandez’s pitch was a mistake, but Martin—who was homer-less to that point in August—deserves a good deal of credit for capitalizing on it.

The Rangers added another pair of runs in the third inning on two singles, a walk, and two stolen bases—plus a throwing error by catcher Henry Blanco—and they were only getting started. With five runs already on his line, Hernandez came out for the fourth inning and faced four batters. All of them reached base, on two singles and two doubles, and all of them eventually scored, the fourth on a two-run shot by Adrian Beltre off of long reliever Brandon Maurer.

It marked just the third time in Hernandez’s career that he failed to notch a fourth-inning out, and one of the other two abbreviated outings was halted by elbow soreness in the opening frame. It also marked the first time that Hernandez had ever left a major-league game with eight or more earned runs on his line—though he had, on 10 previous occasions, permitted seven.

It was not, however, the first time that the Rangers—who ultimately won 12-4 and improved to 19-6 in August—had gotten the better of Hernandez this year. They collected four runs on 10 hits over 6 2/3 innings in a win on April 11, five runs on 11 hits over 5 2/3 innings in a win on May 25, and—after Hernandez avenged those defeats with seven frames of two-run ball on July 3—five runs on five hits in as many innings on August 17. Add today’s drubbing, and the Rangers’ collective triple-slash line with Hernandez on the mound this year looks like this: .364/.417/.570. That .987 OPS would rank fourth among qualifying big leaguers, wedged between Mike Trout and David Ortiz.

Meanwhile, the Athletics haven’t scored a run against Hernandez in 14 2/3 innings over two games, both of them Mariners victories. Bob Melvin’s hitters have combined to bat .163/.196/.224 versus the righty, just a smidge better than the .167/.186/.214 line that Stephen Strasburg has amassed in as many (51) plate appearances this season.

If the Rangers edge the A’s for the American League West crown, their relentless assault on the King might be the difference.

Quick Hits from Wednesday
It won’t offer much consolation to Hernandez, but he wasn’t the only ace who got hammered on Wednesday. Adam Wainwright took an even harsher beating from the Reds, lasting only two innings, over which Cincinnati tattooed him for a career-high nine runs on eight hits and two walks. Opposing starter Homer Bailey got in on the action with a first-inning RBI single, part of a six-spot for the Reds in the opening frame, and Jay Bruce delivered a three-run bomb in the second to bloat Wainwright’s ERA from 2.58 to 2.96, the highest it has been since April 7.

Fortunately for the Cardinals, rookie Michael Wacha picked up the slack for Wainwright to ensure that manager Mike Matheny’s bullpen would not be taxed by its starter’s early exit. The righty tossed four scoreless innings and racked up seven strikeouts along the way, doing an outstanding job in mop-up duty to carry St. Louis through the sixth. Bailey stifled the Redbirds’ lineup, working seven frames without permitting a run, and his efforts brought the Reds to within 3 ½ games of first place in the Central, where the second-place Pirates still trail the Cardinals by half a game.

Positives have been few and far between for the Royals this month, as they have faded out of the American League postseason picture and are now battling to stay over .500. But Ned Yost’s bunch has won four in a row, and on Wednesday, Kansas City’s catcher had himself a night.

Salvador Perez logged a couple of four-hit games in 2012, on July 5 and September 1, but he hadn’t exceeded three knocks in a contest this year. Until Wednesday, that is. The 23-year-old backstop went 4-for-4 with three extra-base hits in the middle match between the Royals and Twins and turned in the first multi-homer effort of his young career. Perez’s TAv had declined from .274 last year to .250 through Tuesday night’s game, but a strong finish could wash away his earlier scuffles and put him on track to rebound in 2014.

Speaking of hoping for big things next year—that’s precisely what Danny Duffy is doing. Perez’s batterymate blew away the Twins, contributing 6 2/3 scoreless innings to Kansas City’s rout before giving way to Luke Hochevar and Aaron Crow. The latter surrendered a solo shot to Justin Morneau in the bottom of the ninth, Minnesota’s only tally in the 9-1 Royals win.

The 24-year-old Duffy needed a yearlong hiatus to recover from Tommy John surgery, but some 14 months after he went under the knife, he looks as sharp as ever. (And he’s impressing scouts.) Duffy did not walk a batter on Wednesday, the first time in his career that he has posted a zero in the “BB” column of the box score, and he now has a 1.10 ERA to go with 17 strikeouts in 16 1/3 innings. 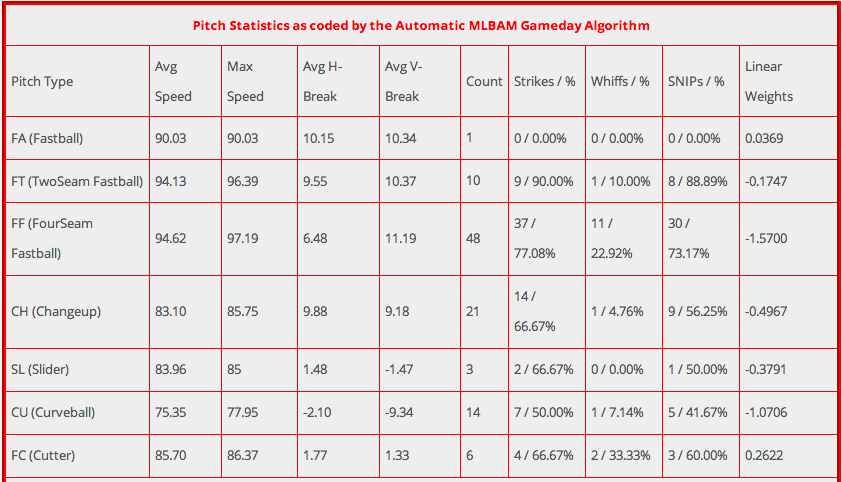 A fastball that routinely registers in the mid-90s on the gun and can touch 97 mph remains Duffy’s bread and butter. He blazed 12 heaters by the Twins on Wednesday night and threw 46 of 59 (78 percent) of his two- and four-seam fastballs for strikes. If Duffy can continue to sharpen his secondary arsenal and exhibit the type of control he had in this one, he could be a key contributor to the Royals’ push for a playoff spot in 2014.

Defensive Plays of the Night
The debut edition of this segment featured the wizardry of two shortstops. Today, we look back at the fine glovework of a couple of pitchers.

First up: Tom Gorzelanny, who didn’t fare well on the mound, coughing up four runs on nine hits to the Pirates in just 5 1/3 innings, but may have saved his own life in the opening frame.

Marlon Byrd’s first at-bat with the Pirates came with a run in, two runners on, and one away. He got a meaty, 0-1 fastball and scalded it right back at Gorzelanny, who pinned the ball against his body and fired to first to complete the 1-3 double play.

Meanwhile, in the first inning of the Orioles’ loss to the Red Sox, Bud Norris kept an early 1-0 lead intact by showcasing his athleticism off the mound. With a runner on second and one away, Dustin Pedroia chopped a full-count fastball to the third-base side of the mound, much too slowly for Manny Machado to have a play at first. If Norris had failed to make the play, the Red Sox would have had men at the corners with one out. If Norris had fielded the ball and threw it away, the game would have been tied.

He did neither. Instead, Norris raced over, fielded the ball with his bare hand, and set his feet while spinning around to make the play in plenty of time. Chris Davis helped his pitcher by corralling the one-hop throw, and Norris then coaxed a fly out from David Ortiz to keep the Orioles on top until the bottom of the seventh.

You need to be logged in to comment. Login or Subscribe
rawagman
I do enjoy the new format. I hope you keep it.
Reply to rawagman
statsrath
It shall stay. Thanks, R.A.
Reply to statsrath