“Max Scherzer is facing Matt Harvey in the national game on Saturday. We should all probably settle in and enjoy that one.” —Will Woods in What You Need to Know last Friday

The last time we saw—or thought we saw—a healthy Matt Harvey, he was limiting baseball’s best offense to two runs over 6 1/3 innings. He lost that game, a Saturday tilt in Detroit, but only because the Mets couldn’t muster any run support against Max Scherzer. Harvey struck out only four Tigers, a low total for him, but by itself, that wasn’t a sign that something was wrong; in mid-May, he’d struck four Pirates over seven. He gave up a career-high 13 hits, but eight were on the ground, only two went for extra bases, and several were seeing-eye singles. He didn’t walk anyone. And he held Miguel Cabrera homerless.

Mets manager Terry Collins didn’t see anything amiss; he let Harvey throw 102 pitches, and while he admitted that the Tigers “got some pretty good swings,” he called his ace’s performance “another great outing.” (His tune changed somewhat after the MRI.) Harvey, for his part, wasn’t pleased, but he didn’t sound concerned. “Just a poor performance,” he said. “I’m getting pretty tired, but so is everybody and you have to work through it.”

Now we know that what Harvey described as fatigue was a symptom of something more serious. The 24-year-old has a partial tear of the UCL in his right elbow, which means that he’s out of action not only for the rest of the season, but potentially for 2014 too. He'll be 26 on Opening Day of the 2015 season. “This is sort of the last thing we expected,” Collins said. “When I heard the news, I was pretty shocked,” added Harvey.

As Sam Miller and I discussed today, there weren’t any obvious usage indicators that Harvey was at risk. Harvey had been handled responsibly both during and prior to this season, was free of glaring mechanical flaws, and was out of the injury nexus. But were there any subtle clues in his most recent outing that the end was near?

One of the last articles internet analyst Josh Kalk wrote before he was whisked off to Tampa Bay’s Baseball Ops bunker was “The Injury Zone,” in which he tried to train a neural network to identify signs of impending injury in PITCHf/x data. Kalk’s findings were far from an exact science; a pitcher who entered the injury zone he defined had only a one-in-three chance of ending up on the DL instead of making his next start, and 25 percent of injured pitchers never passed through the zone. But Kalk did come up with enough clues to conclude, “It is clear, if you dig deep enough in the data, that pitchers who land on the DL are pitching differently from healthy pitchers.”

Kalk compared park-corrected PITCHf/x parameters from the last 10 pitches of outings that immediately preceded DL stints to “healthy” baselines values for the same pitchers. (His reasoning for picking 10-pitch stretches was that they would offer the best balance of proximity to the injury and a representative sample. Kalk acknowledged that “any time during a game a pitcher might throw two or three poor pitches in a row,” but on the other hand, “it is likely that the pitcher is feeling the effects of the injury only close to the time he is pulled.”) In descending order of importance, the variables that had predictive power were velocity, vertical movement, horizontal movement, vertical release point, and horizontal release point. Let’s take a look each of those to see what it has to say about Harvey. For four-seamers only:

No smoking gun here. Seven of Harvey’s final 10 pitches were fastballs, and their average speed was almost an exact match for his average in his first 25 starts of the season. His final offering was clocked at 97.8.

Here we might have something. Harvey’s average vertical movement in his final start was his second-lowest of the season; the start with the lowest came earlier in August. And the decline looks like a trend since the start of the season: 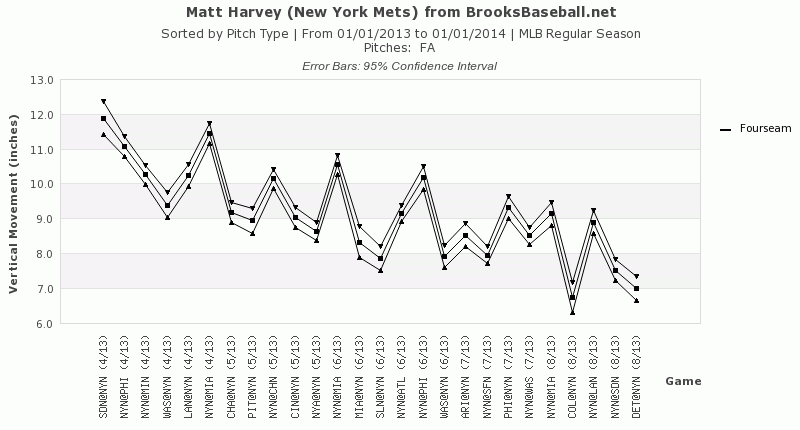 More on that in a moment.

Unless a little more movement is a bad thing, this doesn’t seem like a sign. And Harvey’s vertical and horizontal release points were virtually identical to his seasonal averages:

So four out of the five indicators don’t indicate anything in Harvey’s case. The only potential red flag is his vertical movement. The “rising” fastball that Harvey featured in April looked less explosive as the season wore on, and its hop took a fairly sharp dip in August, right around when he began to complain about fatigue and poor performance. I don’t know that that alone would have been enough to push Harvey into Kalk’s injury zone, but in retrospect, it seems significant. It could be that Harvey started putting less backspin on the ball as his elbow—which had been receiving treatment for tightness “for much of the season,” according to GM Sandy Alderson—began to bother him more.

Most pitcher injuries are the result of cumulative wear-and-tear, not a single, catastrophic snap. Harvey’s UCL likely began to fray, and then to tear, as the season wore on. It’s possible that if he’d stopped pitching sooner, the injury could’ve been caught and allowed to heal before it became severe. But it’s hard to say that the Mets should have shut him down based on some circumstantial PITCHf/x evidence when he was still pitching effectively, their fans had little else to look forward to, and every additional home Harvey start meant an increase in attendance and revenue. If anything, maybe the accelerated decrease in vertical movement in August, when coupled with the preexisting condition of forearm tightness, could have been cause for an earlier MRI.

Harvey also complained that he couldn’t control his slider in his last start, saying, “Today I just couldn’t throw a slider for a strike. I just couldn’t throw it that well at all. It’s a pitch that I need, and the last couple starts I haven’t had it.” Ten of the 14 sliders he threw were called balls. Kalk didn’t mention any correlation between injury and decreased command and control in his 2009 article, though it certainly seems logical that some connection would exist for elbow ailments. Now that he’s on the inside, perhaps Kalk has updated his model to incorporate COMMANDf/x data, which might help pinpoint a pitcher who’s suddenly missing his spots.

It's also worth noting that Harvey has increased his fastball rate over the course of the season, though that could have as much to do with the pitch's effectiveness as it does his elbow problems. For all of PITCHf/x's precision, it's still a tall order to isolate the effect of an approaching injury. 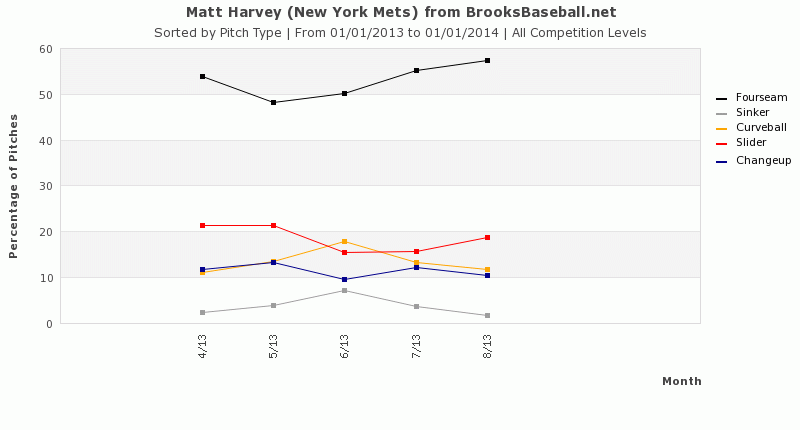 It's impressive that Harvey was able to pitch as well as he did with a partially torn ligament. We don’t know what the degree of his tear is, and it’s possible that rest, rehab, and Platelet-Rich Plasma (PRP) therapy (which does sometimes work) could heal it enough for Harvey to avoid surgery. Even if he had surgery now or as soon as the swelling went down, he’d probably be done for next year, so at this point, there’s no harm in waiting a while to see whether an alternative treatment will work.

Less than a month ago, I wrote about the historical significance of Harvey’s first calendar year in the majors. Here’s how that article ended:

So the last sixty-plus years have seen quite a few early careers as impressive as Harvey’s, at least in a statistical sense. We know Harvey has the repertoire to sustain his success, so the question is how long he’ll hold on to his stuff. Advances in training techniques, nutrition, and medical care, plus a more enlightened attitude toward pitcher usage, make it less likely that he’ll suffer the same fate as some of the less fortunate fast starters, but it’s far from certain that he has a long list of accolades ahead of him. We often point out that pitching prospects are unpredictable, but to a lesser degree, the same can be said of phenoms who’ve already experienced some serious big-league success. Here’s hoping that Harvey is one of the lucky ones.

Sigh. Those were the days.

You need to be logged in to comment. Login or Subscribe
alor112
As a Mets fan who was saddened by the news yesterday I appreciate the article. So mmuch was made of Harvey's mechanics and how they could help limit injury. Only to see him end up in the same situation as pitchers with "unsound" mechanics.
Reply to alor112
mattstupp
I'm perplexed as to why teams seem use MRIs as a "last resort" of injury diagnosis- particularly for pitchers' elbows and shoulders. What is the harm/downside in having an MRI after the very first sign of a potential issue? Hell, what's the harm in giving a pitcher an MRI on his elbow and shoulder between every start? I doubt that teams should be afraid of having to pay the co-pays..
Reply to mattstupp
bornyank1
We talked about that on this episode of Effectively Wild.
Reply to bornyank1
mattstupp
Thanks! I'll check it out.
Reply to mattstupp
howlingmoon
100% agreement. With all that is invested in young pitchers, an MRI every week would seem a more than reasonable addtional investment.
Reply to howlingmoon
mhmosher
Doesn't it seem like the rate of TJ surgeries per year has increased over the last 5-6 years? Maybe its just me.
Reply to mhmosher
jguariglia
MRI every week? Guys, that's a tremendous amount of radiation!!! I don't know too many people who would want to be exposed to that.
Reply to jguariglia
dethwurm
MRIs do not use radiation...
Reply to dethwurm
jguariglia
Maybe Bruce Banner, but thats it
Reply to jguariglia
aaronbailey52
Is "forearm tightness" ever NOT actually an undiagnosed an elbow injury?
Reply to aaronbailey52
Shankly
I love articles like this. Graphs, charts. Excellent!
Reply to Shankly