Monday Takeaway
Given his sterling 2.86 ERA after shutting down Chicago on Monday night, explaining the greatness of Dodgers starter Zack Greinke comes pretty easy. Even with declining velocity—his average fastball has dropped from 94 mph to 91.7 mph since 2007—few pitchers consistently contribute at the same level.

But in 2013, there’s an aspect of Greinke’s performance that cannot be ignored. After going 1-for-2 with a walk against the Cubs on Monday, the Dodgers starter is now hitting .340/.426/.383 this season. He’s not merely baseball’s only starting pitcher posting better-than-average hitting numbers, he’s leaps and bounds ahead of his peers.

Unlike many of the best-hitting pitchers in baseball, Greinke doesn’t succeed by flailing for the occasional home run. He looks shockingly in control at the plate, which seems even more unlikely when you consider the years he spent in Kansas City not taking hacks.

Greinke’s improvement at the plate is reflected most clearly by his 10.2 percent strikeout rate. While most pitchers hack away, Greinke and Barry Zito are the only starters with K rates below 20 percent this season. But unlike Zito, who has just five hits in 41 plate appearances, Greinke actually makes decent contact frequently enough to do some damage.

Entering Tuesday’s action, Greinke leads all MLB pitchers in both hits and walks. Miguel Cabrera, Joey Votto, and Mike Trout are the only players in the sport getting on base at a higher clip. This is practically a master class on not wasting the final spot in the batting order.

Even considering the low expectations, most pitchers don’t separate themselves from the pack on offense. Over the course of the season, they’ll get the occasional hit, or even a homer or two, but ultimately we’re talking about only a few runs above or below replacement. But with Greinke, we’re seeing such a high level of hitting performance that it will almost undoubtedly affect his year-end value to the tune of more than a win.

When discussing the best pitchers at the end of this season, don’t forget to give Greinke a boost for what he’s done at the plate. It may not be pitching, but it’s an important part of his on-field contributions. —Satchel Price

Matchup of the Day
R.J. Anderson noted last week that the Marlins, in the midst of their latest cycle of young, affordable starting pitchers, have collected a trio of promising young fireballers over the past 13 months to complement their homegrown rising star Jose Fernandez. The hardest thrower of the group, Nathan Eovaldi, has seen his fastball velocity surge after the hurler returned in June from a two-plus-month hiatus—the result of shoulder inflammation. Eovaldi has averaged 96.97 mph with his fastball in 2013, edging out Gerrit Cole by the slimmest of margins for the league’s hottest heat.

The 23-year-old has dialed up his fastball velocity to new levels this season and subsequently eschewed his sinker, which he relied upon approximately 20 percent of the time during his first two seasons. As a result, Eovaldi has turned to his fourseam fastball an inordinate 71 percent of the time. With such a heavy reliance on his fastball, Eovaldi will need to be careful where he spots his heat against Ryan Zimmerman on Tuesday. 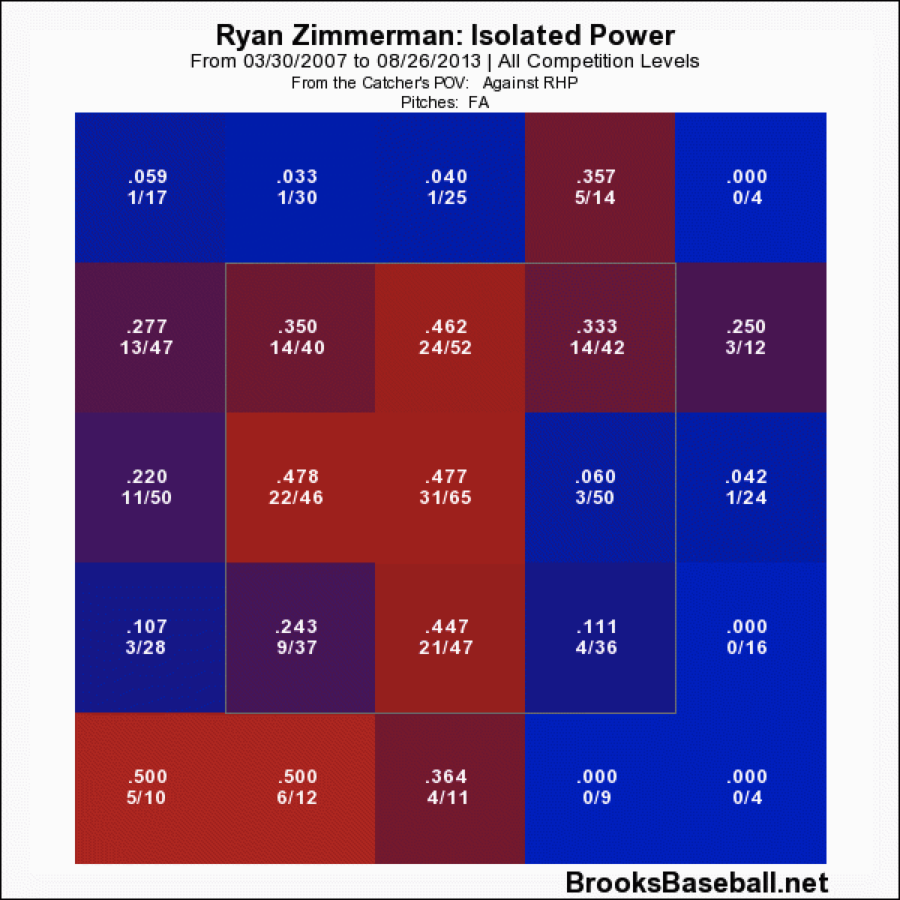 There are two distinct areas where right-handed pitchers can attack the Nationals third baseman with fastballs. Zimmerman has trouble with heat off the plate belt-high or lower and generally with fastballs up in his eyes. The latter is more easily exploited, as Zimmerman often expands the strike zone up, but in either case, missing your spot and leaving the pitch at the letters or middle-in spells misfortune for opposing pitchers.

Against right-handed batters, Eovaldi has been essentially a two-pitch hurler, as he supplements his heavy dosage of fastballs with his slider. Fortunately for him, sliders have been Zimmerman’s Achilles heel against right-handed pitchers over the course of his career and has been even more pronounced this season. Eovaldi generates the majority of his whiffs on sliders low and off the plate, where Zimmerman happens to transform into an extreme ground-ball hitter against right-handed sliders.

Zimmerman and Eovaldi squared off for the first time on July 12th, and Eovaldi retired Zimmerman during all three at-bats. However, in Zimmerman’s third trip to the plate, he came extremely close to making the young Miami hurler pay for failing to locate his fastball.

This is where catcher Rob Brantly set up: 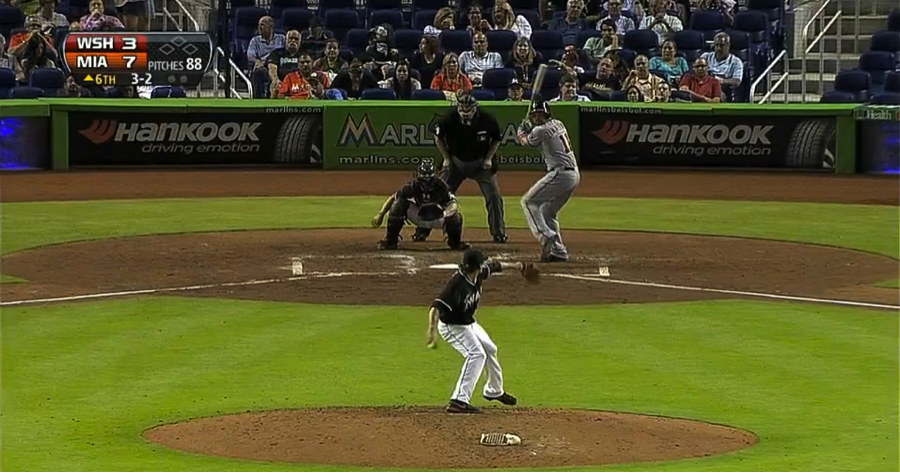 And this is where the pitch ended up: 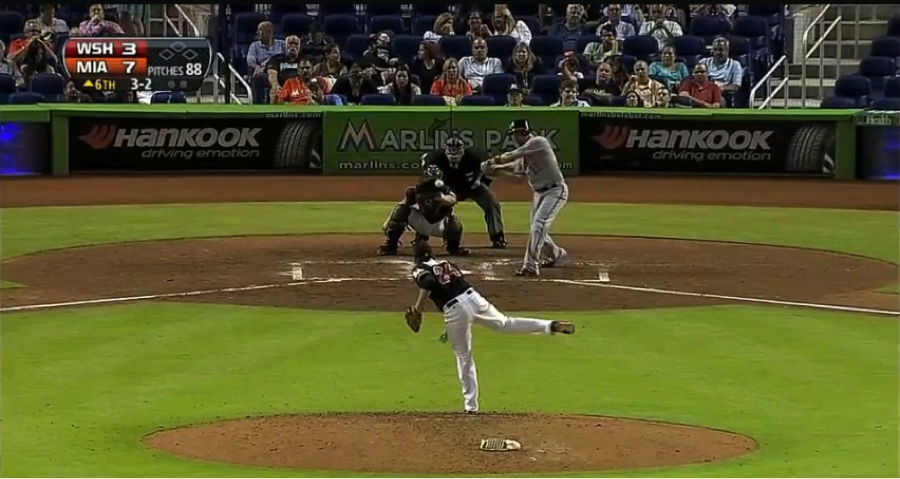 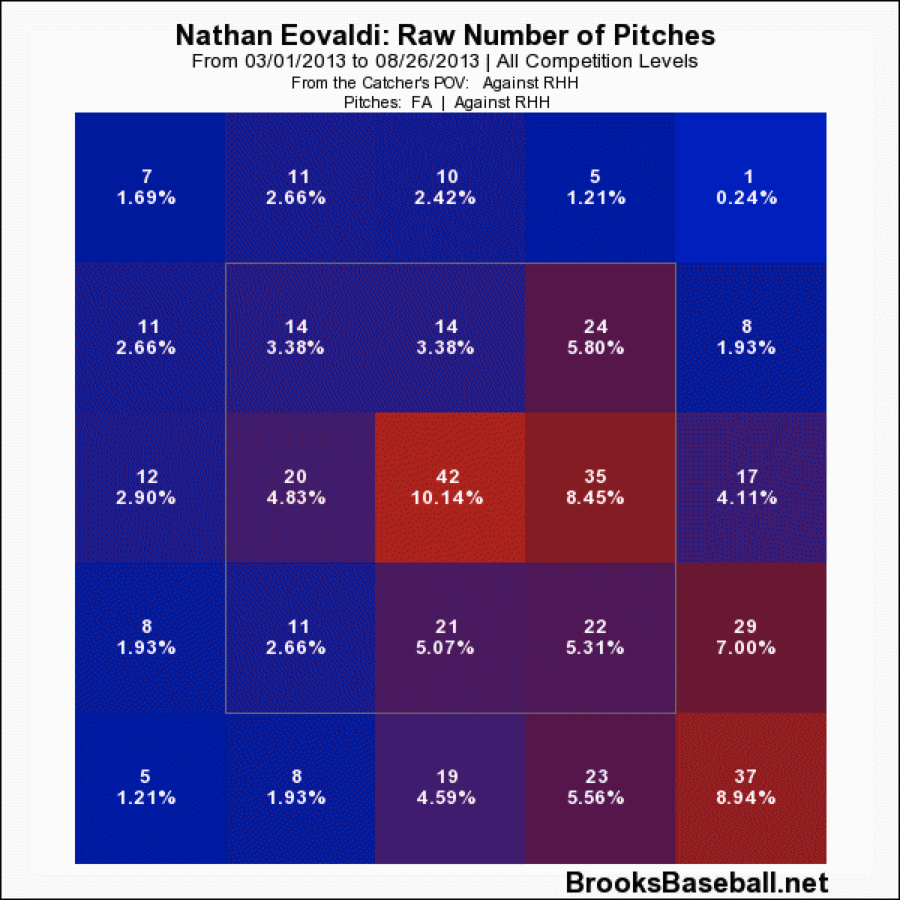 Of the regions where Zimmerman has struggled against the fastball, the more likely area of attack for Eovaldi on Tuesday will be low and away, as he generally shies away from pitching in or attacking up in the zone. It will be crucial for Eovaldi to stay on top of the ball and keep his fastball down, as he has occasionally left his fastball over the middle of the plate. Eovaldi got a gift the last time he made a mistake against Zimmerman. He may not be as lucky if he slips up again (7:05 p.m. ET). —Chris Mosch

You need to be logged in to comment. Login or Subscribe
brucegilsen
Funny coincidence that you discussed Greinke's hitting and then mentioned Travis Wood below, because Wood is hitting a nice .255/.281/.436 with 3 HRs this year.
Reply to brucegilsen