Thursday Takeaway
In what must have felt like a rehab assignment to a man of his powers, Clayton Kershaw traveled to Florida and eviscerated a bunch of—you know what? Kershaw is good. You know this. Let’s do something else…

Braun Comes Clean
Last night, disgraced Brewers slugger Ryan Braun released a statement admitting he’d taken performance-enhancing drugs and apologizing for having done so. It wasn’t the apology we’re used to—a vague, cryptic, “I’m sorry for things in my past,” like someone talking to his grandchildren from his deathbed—and it includes the uncomfortably identifiable psychological process wherein he convinces himself he’d done nothing wrong.

I deeply regret many of the things I said at the press conference after the arbitrator’s decision in February 2012. At that time, I still didn’t want to believe that I had used a banned substance. I think a combination of feeling self righteous and having a lot of unjustified anger led me to react the way I did. I felt wronged and attacked, but looking back now, I was the one who was wrong. I am beyond embarrassed that I said what I thought I needed to say to defend my clouded vision of reality. I am just starting the process of trying to understand why I responded the way I did, which I continue to regret. There is no excuse for any of this.

For too long during this process, I convinced myself that I had not done anything wrong. After my interview with MLB in late June of this year, I came to the realization that it was time to come to grips with the truth.

I’m not here to cast judgment, but I think we’ve all taken this journey on a smaller scale at one point or another. To me this does a lot of good for Braun, not because it recoups any of his reputation in the short term, but because it ends the story (or should). Deep down, I don’t think many people truly care about this—they don’t feel betrayed, or look at him differently for lying, or think Ryan Braun has a greater effect on their child’s moral compass than they do as parents. So he has nothing to gain in the near term; down the road, though, he can remember yesterday as the day we started to forget that he’s a cheater.

I look forward to sometime in mid-2015 when Ryan Braun comes to the plate and no one thinks about this. Because unless we’re going to bring it up every time Cesar Puello comes to bat, it will be forgotten.

Delmon Young Signs with the Rays
The Rays have given a minor-league deal to Delmon Young, who will return to the organization that drafted him first overall in 2003 an attempt to revitalize his career. Young was released by the Phillies last week after hitting not quite well enough to justify his inabilities in the outfield, and speculation of a return to Tampa had been rampant since.

Young is still just 27, which is shocking when you consider how long he’s been around, and even more shocking when you consider what he looks like. A return to the American League is the right move after Citizens Bank Park proved that, no, there isn’t an NL park that can hide him. Young can be an effective hitter against lefties, and with everyday right fielder Wil Myers typically DH-ing vs. southpaws, the Rays are versatile enough to benefit from Young’s one bona fide skill as they reach their playoff run.

And if it doesn’t work out, well, the Phillies are still paying him.

Matchup of the Day
Since his walk-off single against the Pirates last Thursday, Matt Holliday has had one hit against right-handed pitching. Tonight, in the opening game of a weekend series between two of the best teams in the NL, Holliday facse Kris Medlen, against whom he’s 0-for-5 with a walk and three K’s lifetime. Medlen’s plan is never a secret, especially against same-sided hitters: he’s throwing heat nearly two-thirds of the time, and as with many sinker-ballers, it’s difficult to parse individual matchup data because he’s just trying to execute the same pitch regardless of opponent. If anything, the lack of strategy spells trouble for Holliday—when you haven’t had success and you’ve always known what’s coming, it’s tough to change the game plan.

Because this column without a heat map would be rather déclassé, here’s Holliday’s frequency of groundballs against right-handed sinkers: 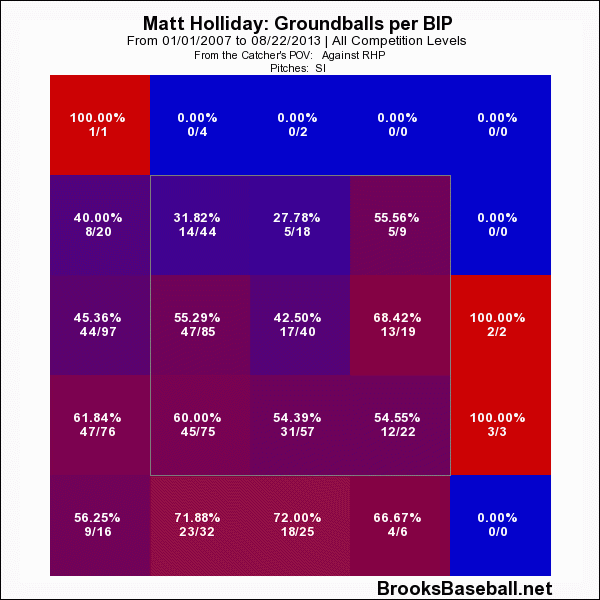 And finally, this would be the coolest thing ever.

You need to be logged in to comment. Login or Subscribe
BruceSchwindt
Completely disagree with your take on Braun. His apology was a bunch of bull. Instead of just saying- I lied to protect myself and knew I was lying but didn't care about who I hurt since I am a selfish jerk, he comes up with this whole psychological mind trick. It is the same act used by many people who know they have to confess but want to find some way to justify their actions. Braun will always remain a loser and, while Milwaukee fans will undoubtedly act as if he is a returning war hero, many of us will continue to view him as a sad excuse for a human being.
Reply to BruceSchwindt
SlackerGeorge
Re. Braun: "At that time, I still didnâ€™t want to believe that I had used a banned substance"

I don't understand this statement. Is it like fiddling with your car radio and blowing through a stop sign but not realizing it? Or was he playing the "bagel poppy-seed" game?

In regards to "uncomfortably identifiable psychological process wherein he convinces himself heâ€™d done nothing wrong.", I don't recall any time I recognized I'd done something wrong, was caught and still couldn't believe I'd done it. Are you saying that this is the thought process: "everyone does it, i've done it forever and never gotten caught, its ok."
Reply to SlackerGeorge
jrmayne
I've edited Braun's statement to make it shorter and more credible.

Now that the MLB investigation is over, I would like to apologize to everyone for getting caught twice.

Getting caught was the most embarrassing thing to happen to me. The first time, I successfully blamed others, and I regret that did not work longer.

The use of something disallowed occurred when my grandmother was dying and I had been diagnosed with testicular, lung, and brain cancer. I took two pills to cure the cancer, and they also caused positive tests, which are my fault, kinda. And then my grandmother died.

I would like to apologize to people for getting caught again. You would think I would be able to avoid getting caught again with my vast resources and the fact that I only took two pills to cure my cancer and save my grandmother, who undied because I took the pills only to die again later out of grief because of MLB's intrusive anti-Ryan-Braun policies. But it's my fault in the end for getting caught.

I would like to apologize to the specimen collector. No matter how much of an insignificant God-hating peon he is compared to me, I should not have gotten caught lying about him.

I remain filled with regret over this incident. I swear on all that is holy that I shall never get caught again.

Reply to jrmayne
sbnirish77
"I look forward to sometime in mid-2015 when Ryan Braun comes to the plate and no one thinks about this."

I think Braun saw the treatment Arod was getting in terms of physical and verbal abuse and worried he was about to receive the same, not just for a couple more years like Arod, but for the remaining 8 years of his contract.

Ryan came forward because he realized his stonewalling wasn't going to work and just wanted to throw something else against the wall to see if it would stick.

Reply to sbnirish77
briankopec
I see Braun has yet to successfully navigate Step 1: Admit that you have a problem.

But I really don't get why people care. He's not a person in my life. While I hope for his own mental health that he is able to internally resolve the whole sordid ordeal, to me he's just a ballplayer.

So I say, 'Play ball!'
Reply to briankopec
sbnirish77
Congratulations to making it to step 7 of the Apologist's Bible.

7. Who cares?
Reply to sbnirish77
briankopec
You read that as apologizing for Braun? All I'm saying is that I don't care whether, why, or how Braun apologizes. And I don't get why other people care why or how he does either.
Reply to briankopec
rawagman
You are constantly preaching against the roiders. Why is this such a big deal to you? Over and above the weight placed on the offense by the mutually agreed to JDA?
Reply to rawagman
flyingdutchman
"...but Max Scherzer is facing Matt Harvey in the national game on Saturday. We should all probably settle in and enjoy that one."

Yes, we should have, and I would have loved to, but Fox determined that I wouldn't be allowed to watch this game.

It's difficult to understand why something can't be worked out between MLB and Fox so that all of the games are available to MLB.tv Premium subscribers. We are, after all, among baseball's most avid fans. Why can't I get a feed of the Fox broadcast?
Reply to flyingdutchman