It's an innocent line in a game recap, but of course it was so much more than that. On Sunday Night Baseball (between—wouldn't you know it—the Yankees and Red Sox) at Fenway Pawk, Ryan Dempster had a pitch slip out of his hand and, unfortunately, strike the batter at the plate, thus entitling that batter to first base. He may or may not have been having difficulty with his pitch location on the first three pitches of the at-bat. Major League Baseball seems to think so, by virtue of the five-game suspension that it handed out over the matter. Apparently they believe that Dempster was trying to hit the batter, but couldn't quite aim it right.

Coincidentally, the batter at the plate was Yankees third baseman Alexander Emmanuel Rodriguez. I think I heard something about his having been involved in something controversial lately. Not sure. Rodriguez's Yankees, who were down by two runs at the time, went on to win the game 9-6.

On Wednesday, Red Sox designated hitter David Ortiz went on the record to say that he didn't appreciate his teammate's actions.

"I didn't like it. I don't think it was the right thing to do,'' Ortiz told USA TODAY Sports. "But we don't all think alike, and the guy who did it, Dempster, is a great guy. It's not that I didn't think it was right because Alex and I are friends, because once you cross the white lines, everyone's on their own.

"But we've got Tampa right on our heels, and that pitch woke up a monster in the Yankees' team at that moment. You saw how the game ended up. CC (Sabathia) was throwing 91 (mph) and started throwing 96. Alex later hit one way out there. You're talking about a good team that you can't wake up. But we learn from our mistakes.''

Most fans of baseball and literary archetypes (which seem to overlap more than we care to admit) will critique the first paragraph of Ortiz's statement and his philosophical choice to defend a friend from the other team over his teammate, even after the friend had allegedly, reportedly, possibly, theoretically used PEDs. But the second paragraph deserves some attention. Did the beaning by Dempster really bring the Yankees to life? (Okay, you literary types, A-Rod as sacrificial character. Go.)

Well, the facts check out. Rodriguez did homer off Dempster to lead off the sixth inning (although in his at-bat right after the beaning in the third inning, he grounded to short). And while Sabathia's pitch velocity chart from the night (see below) shows only one pitch above 96, it also shows a pitcher who went from 92-94 in the first inning to sitting more comfortably around 94-95 by the third. 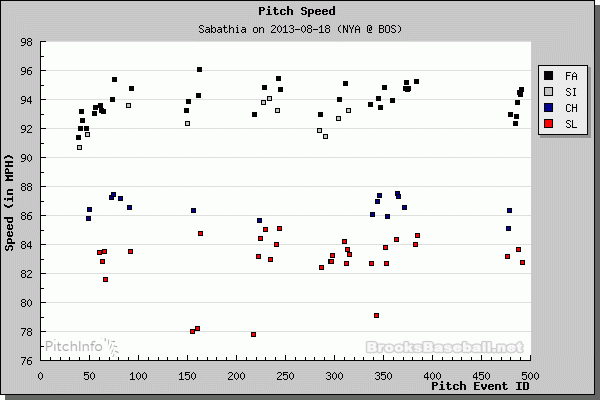 The narrative of the sleeping monster plays well, especially because (if not entirely because) the Yankees won the game. But is that literary fiction or scientific fact?

The allure of these sorts of narratives lies in the fact that you can't really prove them in the moment, but they sound right and fit the circumstances (even if the narrative is often bent to fit the circumstances.) It's also hard to do the kind of yea-or-nay research that would be needed to rule one way or the other. One game is too small a sample size to rule on anything. As of this morning, there have been 1,211 hit batsmen leaguewide in 2013, including three other Yankees (Robinson Cano, Jayson Nix, and Brett Gardner) in the same game. Could there be 1,211 sleeping monsters in baseball?

The argument that Ortiz is making relies on a couple of assumptions. One is that the Yankees saw the beaning as an assault not just on A-Rod, but on "one of their own." While talking to Franklin D. Roosevelt about Nicaraguan dictator Anastasio Somoza García, Secretary of State Sumner Welles one supposedly said, "[He's] a bastard!", to which Roosevelt reportedly replied, "Yes, but he's our bastard." A-Rod might be a divisive figure in baseball, and for all I know, within the Yankee clubhouse, but teams (of all sorts) do tend to stick together. There are experiments that have shown that if you group strangers together, even when you tell them explicitly that groups were assigned completely at random, people will favor those in their own group.

Ortiz’s next assumption is that the Yankee players felt that the assault on A-Rod was, in effect, an assault on each of them individually, rather than Dempster (allegedly) trying to make some sort of statement on national TV. When humans (or many other animals) feel that they will have to fight, the body readies itself with the "fight or flight" reflex. It releases certain chemicals, most notably cortisol, in the bloodstream that stimulate the adrenal glands and re-direct blood flow to key organs. The short-term effect is heightened sensory awareness and an increased ability for physical activity. Maybe Sabathia's 96 mph fastball was cortisol-enhanced. Since cortisol is chemically a steroid, it seems that we're making the argument that A-Rod is contagious.

Now, "fight or flight" is meant to be a short-term response, and the body generally shuts it down after a little while. In fact, prolonged exposure to cortisol because of being in a war zone or under some other threat has some pretty nasty physical effects over time. But in the immediate aftermath of the HBP, Curtis Granderson doubled, Eduardo Nunez singled, and Lyle Overbay hit a sacrifice fly. The Yankees tied the game at 2, and then Sabathia had a 1-2-3 bottom of the second on nine pitches, after 27 in the first. In the top of the third, the Yankees claimed the lead on an Ichiro single, a Robinson Cano single, an Alfonso Soriano liner to right, and A-Rod's groundout. Maybe some of their success was due to feeling a little amped up from the beanball. It's impossible to tell. But it's also not likely that that bump up in cortisol lasted too long, and there were still about seven more hours to play (because, you know, Yankees-Red Sox).

You might make the case that a guy like Ichiro, who in the week leading up to that game had gone 2 for his last 18, just needed that little boost to get him thinking "Yeah, I can do this…" Maybe that started some sort of virtuous cycle that made Ichiro a better player in his next at-bat. Those micro-level psychological factors are as hard to measure as they are complex. It's easy to sit in the broadcast booth or in my mom's basement and perform amateur psychoanalysis on a player at any one moment. There probably are times when these sorts of events do spur players on, but it's also possible that Ichiro was thinking about something else entirely.

David Ortiz might be right, or he might just be indulging in some amateur psychoanalysis with the added benefit of a microphone. Baseball players are humans (or in A-Rod's case, half human, half bull), and there's a legitimate set of steps that could have occurred in which Dempster really did wake a sleeping Bronx monster. Maybe he did cost his team a game in the middle of a tight division race. Then again, it could be ex post facto narrative glued on top of a game with some interesting subplots. The problem with these sorts of narratives isn't that they don't exist in some meaningful way. It's that the processes that would lead to them are complex and largely unobservable, and there are plenty of places in the chain that the "sleeping monster" theory could break down. A real understanding of how the human psyche works takes more than just a few literary clichés.

You need to be logged in to comment. Login or Subscribe
chabels
If being HBP wakes sleeping monsters then Shin Shoo Choo would have Godzillaed over the entire midwest by the all-star break.
Reply to chabels
WaldoInSC
Don't know if you've noticed, fellow SC dude, but Choo pretty much has.
Reply to WaldoInSC
potterjd
Maybe Ortiz was simply trying to say that it's better to focus on winning games when your in a tight pennant race and putting the lead-off hitter on base is not an action that contributes to wins.
Reply to potterjd
newsense
Russell-

You got your physiology wrong.

There is a world of difference between cortisol, a corticosteroid, and the anabolic steroids implicated in the "steroid" scandal. Corticosteroids are legal and permissible when used under medical supervision and are not tested for, a large percentage of players are given oral or injected corticosteroids every year.

The bulk of the fight or flight reflex is due to epinephrine (adrenaline) secretion by the adrenal glands, although from a different part of the gland (the medulla)than the part that produces cortisol (cortex). It is epinephrine that redirects blood flow, increases heart rat, etc. It is the brain that stimulates the adrenal glands through direct neural stimulation not through hormones.
Reply to newsense
pizzacutter
I know on the "steroid" issue. I was making a very tortured joke.
Reply to pizzacutter