The Wednesday Takeaway
There may not be a truer baseball adage than “you can’t win if you don’t score.” The Royals, who have dropped seven of nine and fallen to 6 ½ games back in the American League wild card race, are learning that lesson the hard way.

Ned Yost’s club was shut out on Tuesday night, its first zero-run output since the 1-0 defeat to the Marlins that started this rut on August 13. Yesterday, the Royals scraped across exactly two runs for the third time since that loss. They have also scored one run once and three runs twice. Only once, in a 6-5 defeat at the hands of the Tigers on August 17, have they exceeded three tallies in a game.

The Royals went 6-for-32 at the plate on Wednesday without an extra-base hit. With runners in scoring position, they went 1-for-10, picking up a run in the fourth inning on a sacrifice fly by Mike Moustakas and another in the sixth on an RBI single by David Lough, the one hit in those 10 at-bats. It wasn’t nearly enough to overcome the five-spot the White Sox posted off of Jeremy Guthrie in the top of the fourth.

Alex Gordon collected a team-high two hits on Wednesday and scored the sixth-inning run, but he also struck out twice and cannot be absolved of responsibility for the other defeats. The left fielder entered the middle match of the three-game set at Kauffman Stadium in a 5-for-35 skid, over which he had fanned 10 times without drawing a walk. A 2-for-4 night makes that a slightly more palatable 7-for-39, but the strikeout total is up to a dozen and the walk counter remains dormant.

Of course, as is often the case when a team struggles to post crooked numbers on the scoreboard, Gordon is not alone. Alcides Escobar—a black hole in the lineup for much of the first four months—enjoyed a 16-for-33 spurt buoyed by a .516 BABIP earlier in August, but since the 14th, he has gone 2-for-29. And the Royals’ leadoff men, a crew comprised of Jamey Carroll, Chris Getz, and David Lough in recent days, are a combined 1-for-24 in the last five games, dating back to their doubleheader sweep of the Tigers on the 16th.

Pitching carried the day for the Royals in that twin bill, as Danny Duffy worked six shutout innings in game one and James Shields one-upped him with seven in game two. Kansas City plated only five total runs, but those two starters and the bullpen held Detroit to one. The Royals scored five runs in one game the next day, but Wade Davis and company coughed up six, costing the visitors a series victory in the five-game set at Comerica Park.

The 2-3 showing in Motown was understandable, albeit problematic given the Royals’ plan to contend in the short term, as evidenced by their acquisition of Justin Maxwell from the Astros at the trade deadline. From that perspective, dropping two of three to the Marlins and knocking on the door of a sweep at the hands of the White Sox is also problematic—and much less understandable.

The Royals still lead the American League with a 3.51 team ERA. Their bullpen, with a 2.66 aggregate ERA, is still the best in baseball. But permitting even three-and-a-half runs per game is a problem when your offense can barely scrape across three.

With the additions of Ervin Santana and James Shields during the offseason, general manager Dayton Moore built the Royals a pitching staff worthy of contention. But their bats, with a .248 TAv for the season, are holding them back. The 17-3 surge from July 23 through August 12 gave optimistic fans, and the front office, hope that the window might be creeping open. The 2-7 plunge has virtually closed it.

Billy Butler refused to give up, telling reporters, “It’s not a tough stretch, it’s just judging off [nine] games.” But the odds say the judgment is warranted. It’s just about time to refocus on 2014 and beyond.

Wednesday’s Matchup in Review
Neil Walker came into yesterday’s game 6-for-12 against Ian Kennedy with a double and a couple of home runs. Now, after Kennedy blanked the Pirates for seven innings in his most impressive outing since the trade that sent him to the Padres at the trade deadline, Walker’s line is down to 6-for-15.

The Buccos’ second baseman, a switch-hitter, pulled the ball to the right side three times. He grounded out to first in the opening frame, grounded out to second in the third inning, and flied out to right in the sixth. Kennedy soft-balled Walker to coax both worm-killers, throwing four changeups in their first meeting and two more in their second. Considering how well they worked, expect the right-hander to continue to rely on his favorite secondary pitch when their paths cross again.

Matchup of the Day
The good news for Paul Maholm is that, after spending a month on the disabled list with a bruised wrist on his throwing hand, he is ready to return to the mound. The bad news is that he’ll promptly run into a hitter who has wreaked havoc on him for years.

Carlos Beltran has been red hot at the plate in the dog days of August, going 24-for-65 (.369/.414/.600) with nine doubles and two home runs. He has gone 9-for-24 in 29 lifetime plate appearances against Maholm, good for a .375/.414/.708 triple-slash line, with a couple of doubles and a pair of long balls. The switch-hitting Beltran has fared better versus righties than lefties this year, posting a middling .757 OPS when batting from the right side of the plate, but that’s likely a small-sample blip because his career numbers are even, and, if anything, lean the other way. 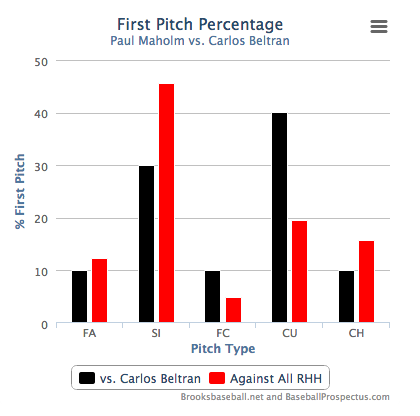 Maholm’s preferred opener when facing Beltran has always been the curveball; he has turned to it nearly twice as often with the Cardinals outfielder in the box than when staring down right-handed hitters as a group. One reason for that strategy is that Beltran tends to take those benders—he has put only 12 of 125 into play since 2007—and wait for something else. That’s not the problem here: Of the seven first-pitch curves that Maholm has thrown Beltran in the 20 plate appearances logged on the matchup page, none has ended the at-bat.

The problem is what Maholm has done next. A poor call by the home-plate umpire to start this at-bat on August 18, 2008 forced Maholm to throw hard stuff in the strike zone, and Beltran capitalized by swatting a double. In this at-bat on June 2, 2010, Maholm jumped ahead 0-1, with the curve, but Beltran laid off a bender just below the knees in a 1-2 count and then smacked a belt-high fastball over the fence.

Most of the damage that Beltran has done to Maholm has come on fastballs and sinkers, including all four of his extra-base hits. Beltran’s pitch recognition and discipline have given him the upper hand, and Maholm has not yet devised a sequence to thwart his patient approach. 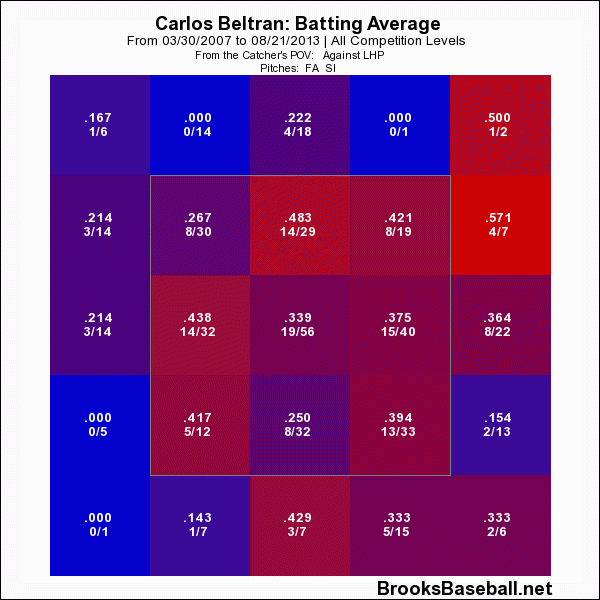 It’s no secret that Beltran can punish fastballs, whether they are inside, outside, knee-high, or at the letters. He is prone to expanding the strike zone up, and sometimes up and in, but Maholm hasn’t done much to expose those faults.

Maholm’s greatest assets as a pitcher are his deep arsenal and his willingness to use all of the options in it against hitters of either handedness. He has located his curveball well when facing Beltran and, if past trends hold, that should work in his favor again tonight. The question is what to throw, and where, in deeper counts. For now, he knows only what the answer is not: fastballs over the heart of the plate (8:15 p.m. ET).