On Tuesday night, the Giants won on a walk-off walk by Marco Scutaro, courtesy of Red Sox right-hander Brayan Villarreal. Winning on a walk-off walk is rare; the Giants hadn't done it in a decade. On the surface, though, this walk-off walk seemed more predictable than most, since Villarreal would walk his own grandmother if she decided not to swing. But it was actually a weird one in two ways: first, that the walk came on 3-0, and second, that ball four looked a lot like a strike.

We know that the called strike zone expands as the count becomes more favorable to the batter, and that it’s at its largest on 3-0. Pitchers and catchers are accustomed to getting a little more leeway off the edges when the batter has a three-ball advantage, which explains why David Ross, normally a strong receiver, makes no real attempt to frame the fourth pitch to Scutaro. Before he hears the call from home plate umpire Mike Everitt, he nods at Villarreal as if to say, “Yes, that was where I wanted it.”

But Everitt doesn’t signal a strike. Scutaro trots to first (after overcoming his surprise), Villarreal wonders what went wrong, and the Giants sheepishly go into a hesitant, are-we-really-supposed-to-celebrate-this imitation of every other post-walkoff pileup you’ve ever seen, in which Pablo Sandoval arrives after the party is over.

I asked Dan Brooks to tell me how strange it was that this pitch wasn't called a strike. Dan queried for all pitches from a right-handed pitcher to a right-handed batter within half an inch of that location. Prior to last night, only 20 3-0 two- or four-seamers since 2007 fit that description, and of those, only three (15.0 percent) had been called balls. It had never happened in the ninth inning, let alone with the batting team one ball away from a win, which made Everitt’s call even more unlikely.

Since the MLB.tv archives don’t go back beyond 2010, the only one of the three previous strikes we can watch is this 3-0 pitch to Troy Tulowitzki on April 17, 2011:

But one of the ones we can’t watch is especially interesting. On May 26, 2009, Hunter Pence—who was among the most awkward San Francisco celebrants last night—took a 3-0 strike on this pitch: 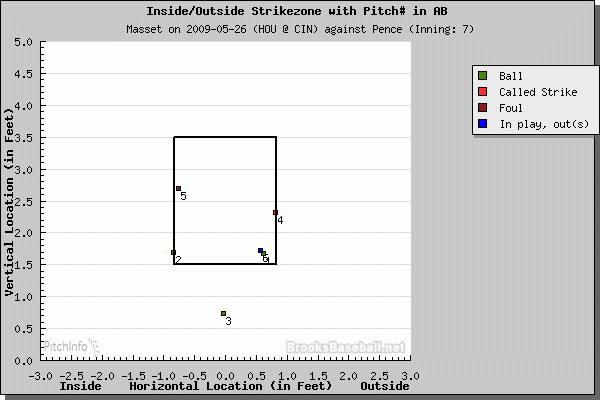 The home plate umpire for that ’09 plate appearance? Mike Everitt, master of misdirection.