The Tuesday Takeaway
As one of the league’s least-friendly venues for pitchers, Great American Ball Park is not an easy place to log a complete game. As of Tuesday morning, it had played host to only 41 nine-plus-inning outings in the 11-plus seasons of its existence. It’s even more difficult to work nine or more frames in Cincinnati’s home yard without walking a batter; until Tuesday, that had happened on only 17 occasions. And only two of those 17 lines featured double-digit strikeouts.

Last night, Patrick Corbin upped those numbers to 42, 18, and three, adding another masterpiece to his breakout season.

The 24-year-old Corbin held the Reds scoreless for three innings, until Martin Prado gave the Diamondbacks a 1-0 lead with a solo home run. Then he posted four more goose eggs on the Great American Ball Park scoreboard before Paul Goldschmidt supplied him with four insurance runs on an eighth-inning grand slam. Chris Heisey brought home two runs for the Reds with a big fly in the next half-inning, but by then it was too little, too late.

As usual, the slider was Corbin’s knockout pitch. More than 70 percent of the breaking balls he threw went for strikes, and half of those strikes were whiffs. But Corbin finished the evening with negative linear weight values (or positive ones, from a pitcher’s standpoint) on all four of his offerings, quite a feat in the cozy confines in Cincinnati.

Corbin spun five straight sliders in Bruce’s fourth-inning at-bat, and the right fielder flailed at three of them. Choo and Votto were both frozen by sliders that wound up right down the middle. And Votto also went fishing later in the game.

Beating the Reds generally means keeping those three off the basepaths, and on Tuesday night, Corbin did it about as well as any pitcher could have. Alfredo Simon tossed 2 1/3 innings of scoreless relief after Tony Cingrani left with an injury, but J.J. Hoover served up Goldschmidt’s grand slam, which ensured that Corbin’s efforts would be rewarded with a win.

The blast to left field was Goldschmidt’s 31st of the year, and it gave him a National League-best 100 RBI. Were it not for his first baseman’s heroics, Corbin’s outing might have ended after eight innings, denying him a place on the aforementioned lists and sending the Diamondbacks to a frustrating defeat.

Instead, the Diamondbacks improved to 65-59 and picked up a game on the Reds, who are five games ahead of them in the race for the senior circuit’s second wild card berth. And Corbin joined Zack Greinke in the two-man club of pitchers who have waltzed into Great American Ball Park and waltzed out with a nine-inning complete game in which they struck out 10 or more without issuing a walk.

“It’s nice to get the win,” Goldschmidt told reporters after the 5-2 decision, “but we’ve got to play well for every game the rest of the year, a majority of the games.”

Corbin and Goldschmidt make a formidable duo. Unfortunately for the Diamondbacks, whose playoff odds have tumbled into the single digits, they can field both players only once every five days.

Tuesday’s Matchup in Review
Zack Wheeler’s first two showdowns with Freddie Freeman did not end well for the right-hander, even though he led the Mets to victory in both games. Freeman collected two walks in Wheeler’s big-league debut and then added a single, homer, and another base on balls the second time they locked horns.

Meeting no. 3 went much like the first two: Wheeler contributed 6 2/3 innings of three-run ball toward a 5-3 Mets win, but Freeman tacked a couple more hits onto his résumé, which now stands at 4-for-6 with three walks.

Fortunately for Wheeler, both of Freeman’s hits last night were one-baggers, and in his third at-bat, he grounded out to first. Scott Rice, a lefty, relieved Wheeler when Freeman was due to bat in the seventh inning, a three-run frame for Atlanta. Freeman represented the go-ahead run, with Andrelton Simmons—the potential tying runner—standing 90 feet away, and manager Terry Collins chose not to take any chances with his team’s rapidly shrinking lead. The Braves’ first baseman flied out in that at-bat, ending his night 2-for-4.

The good news for Wheeler is that he picked up his third straight win against the Braves, the only opponent he has faced more than once during his rookie campaign. The bad news, judging by Freeman’s hits—which came on an outside-corner fastball and a first-pitch, outside-corner curveball—is that Wheeler remains behind the eight ball when it comes to retiring Freeman, who is also 23 years old and threatens to torment him for years to come.

Matchup of the Day
The early returns on the Padres’ trade-deadline attempt to buy low on Ian Kennedy are mixed. Kennedy allowed two runs in each of his first two starts with San Diego, but was thumped for five, including three home runs, in 4 2/3 innings in a home start versus the Mets last week. To bounce back while battling the Pirates, he’ll need to find a better recipe for retiring Neil Walker.

In 12 career plate appearances versus Kennedy, Walker is 6-for-12 with a double and two long balls; he has not walked or struck out. 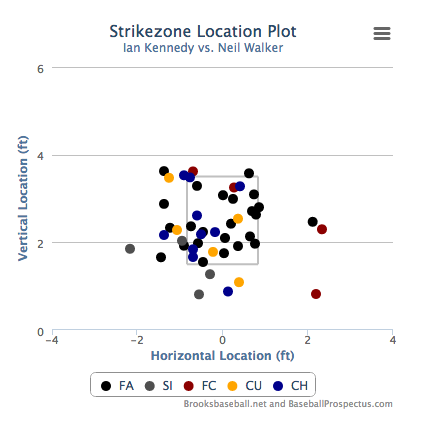 Kennedy’s approach to Walker, a switch-hitter who this year has done all of his best work against right-handers, is about what you’d expect from a pitcher whose best secondary offering is the changeup. He has thrown a healthy dose of fastballs on the inner half of the plate and complemented them with softer pitches away. Apart from location mistakes like this one, which ended up over a fence on August 8 of last year, the changeup has generally served him well. Fastballs, whether on the inside corner or at the knees, on the other hand, have not.

Meanwhile, Kennedy’s 13 percent curveball usage rate versus Walker is in line with his career pitch selection when facing left-handed hitters. But in this case, he might benefit from increasing it.

At least in this small sample of data, the curve appears to be Kennedy’s most effective secondary offering, even though (or perhaps because) he uses it more sparingly than his changeup. 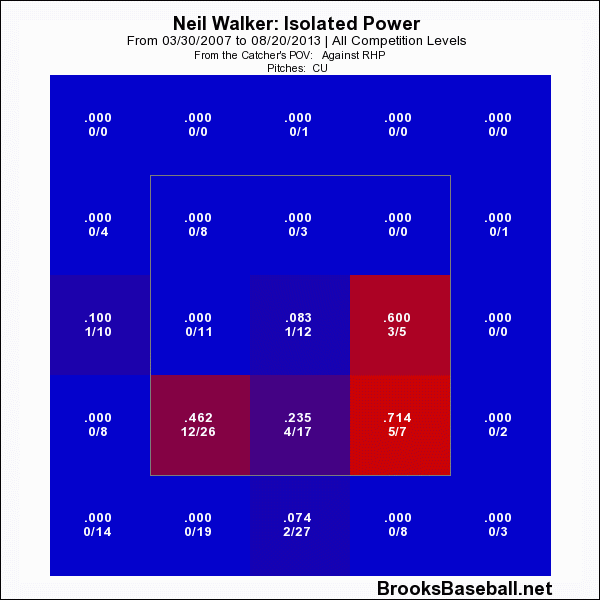 Walker, apart from a few hot spots, is not a good breaking-ball hitter. He tends to chase curveballs below the strike zone and is prone to missing them when he does.

If Kennedy can get ahead in the count while Walker is in the box this afternoon, he might do well to test him with benders. Walker fought off this one back in 2010, but that remains the only curve that Kennedy has ever thrown him below the knees. That adjustment and more caution with the fastball might help him avenge the damage done in their first dozen encounters (6:40 p.m. ET).