The Monday Takeaway
When the Dodgers took the field last night, they did so nearly two months removed from their last string of consecutive defeats. They had logged seven separate winning streaks of four games or longer since their last losing streak. And over that 53-game span, they were 42-11.

Matched up against fellow first-year starter Hyun-jin Ryu, Jose Fernandez set out to do what the likes of Matt Cain, Cliff Lee, and Stephen Strasburg could not: prevent the Dodgers from rebounding immediately from a rare loss. The young right-hander needed 109 pitches to complete six innings, but he held Don Mattingly’s club to two runs (one earned) on four hits and three walks, striking out eight along the way. With help from A.J. Ramos, Chad Qualls, and Steve Cishek, Fernandez came out on top in the “ace-off” and dealt the Dodgers their first two-plus-game skid since June 20-21.

Now that Los Angeles’ surge has, at the very least, been slowed, it’s worth reflecting on just how impressive it was. Immediately after those back-to-back June setbacks, the Dodgers embarked on a 50-game march up the standings over which they went 42-8, rising from 9 ½ games behind the Diamondbacks to 8 ½ games ahead of them. They capped that climb with a 10-game winning streak—snapped by the Phillies on Sunday night—and, with it, accomplished what only two other Modern Era teams, the 1941 Yankees and the 1942 Cardinals, had ever done.

As the lineup got healthy and Yasiel Puig arrived from Double-A Chattanooga, the Dodgers’ pitching staff jelled into the league’s best. Clayton Kershaw, Zack Greinke, Ryu, and company collectively posted a 2.45 ERA between June 22 and August 17. In 459 innings spread across those 50 games, they did just about everything well.

They issued only 114 walks, a 6.2 percent base-on-balls rate that would rank 33rd among qualifying starters if sustained over a full season. They struck out 391 batters, a 21.2 percent strikeout rate that would place 32nd in that same group. They allowed only 32 home runs, or 0.63 per nine innings, good for 17th in the qualifying-starters pack. And they helped their catchers nab 11 of 25 would-be base-stealers, a 44 percent caught-stealing rate that’s just a tick below Yadier Molina’s (45 percent) career clip.

Meanwhile, Mattingly’s hitters, led by a resurgent (and generally healthy) Hanley Ramirez and a sizzling Yasiel Puig, offered their pitchers ample support. Between June 22 and August 17, Ramirez batted .358/.410/.654 in 41 games. Puig, ready from the moment he earned the promotion from Double-A Chattanooga, made adjustments when pitchers adjusted to him, and then made history. With those two doing the heavy lifting, the Dodgers combined to bat .285/.344/.427—becoming, for the sake of comparison, a team of 2013 Ryan Zimmermans (.266/.342/.431), even though their pitchers had to hit.

Together, the arms and bats turned the Dodgers from a sleeping giant into a surefire pennant contender, virtually certain to make the playoffs as the West division champion and with a chance to unseat the Braves for the senior circuit’s no. 1 seed. The awakening and rise now complete, the Dodgers’ most important work lies ahead.

For the first time since June 22, they need a stopper to halt a skid. It’s up to Chris Capuano to help the Dodgers avoid their first three-game losing streak since June 8-10 (7:10 p.m. ET).

Monday’s Matchup in Review
Ian Desmond entered the series opener between the Nationals and Cubs with a hit in each of his last five at-bats versus Jeff Samardzija and eight knocks in his last 11. But on Monday, Samardzija turned the corner on a rough patch in his season and on his recent struggles when facing Desmond to help the Cubs to an 11-1 rout. It was the right-hander’s first complete game since a two-hit shutout over the White Sox on May 27.

The sixth-place hitter in Davey Johnson’s order, Desmond batted thrice against Samardzija before leaving in a defensive switch as Johnson gave his substitutes a chance to take the field in garbage time. He grounded into a 1-4-3 double play in the second inning, struck out swinging in the fourth, and grounded out to second in the seventh.

I mentioned in the preview that a slew of location mistakes had been Samardzija’s downfall in the last dozen or so meetings between him and Desmond. He brought better command to the hill last night, and it paid off in at-bats like this one:

The pitch sequence shown above yielded the fourth-inning strikeout. Desmond took the first-pitch slider for strike one, then fouled off the letter-high fastball to fall behind 0-2. Samardzija missed badly with his 0-2 splitter, a pitch virtually never thrown up and in, but recovered to throw a better one over the outer third. Desmond, never a big fan of soft(er) stuff away, waved and came up empty for strike three.

That was one of five strikeouts that Samardzija recorded in his nine innings of work, during which he scattered six hits and did not walk a batter. He has walked five, zero, four, and zero batters in his last four starts. Now that he has bounced back against Desmond, finding more consistent control would be a nice next step.

Matchup of the Day
Zack Wheeler mowed down the Padres on August 15, recording a career-high 12 strikeouts in six innings of one-run ball, his first six-plus-punchout effort since his major-league debut, when he fanned seven Braves. The 23-year-old Wheeler has flashed impressive stuff throughout his rookie campaign, amassing a 3.43 ERA and a 57-to-29 K:BB ratio over 63 frames, and he is gradually improving his control. Over his last two starts, he has issued only one walk and struck out 16.

Tonight marks Wheeler’s third career date with the Braves, the only big-league opponent that he has faced more than once. Wheeler blanked Atlanta for six innings right after his promotion on June 18, and he defeated Fredi Gonzalez’s club with another six-frame start on July 25, though he served up a couple of homers and allowed four total runs (three earned).

One Braves batter who has not been intimidated by the hard-throwing Georgia native is Freddie Freeman. The first baseman is enjoying a breakout season at the plate, batting .309/.387/.477 to this point, and Wheeler simply has not had an answer for him in their first half-dozen encounters. Freeman has singled, homered, and walked three times, and the only out he made came on a fly ball. In the July 25 meeting, Freeman collected both of his hits and drew one of his three bases on balls. 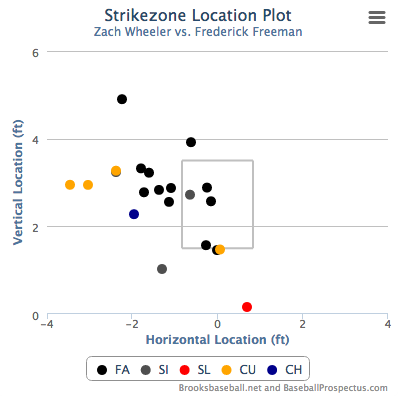 Erratic control is to blame for the walks, many of which consisted of nothing but easy takes. Wheeler introduced himself to Freeman with this four-pitch sequence, which showcased his premium velocity, but also exposed his jitters. Freeman whiffed on a 95-mph sinker to open his second plate appearance that day, but he needed only to stand and watch the four subsequent offerings to take his base again. A month later, it was more of the same.

Unable to find the strike zone with his secondary pitches, Wheeler leaned on his heater on July 25, but he didn’t command it precisely enough to fluster Freeman. By the fifth pitch of his second trip to the box, Freeman had the mid-to-high-90s heat timed well enough to collect his first big-league hit off of Wheeler, and then to pummel a knee-high offering right down the middle in plate appearance no. 3.

While dominating the much-less-potent Padres lineup, Wheeler showed better command of his secondary pitches, which enhanced the effectiveness of his fastball and elicited a healthy dose of swings and misses. He’ll need it to stymie Freeman tonight. 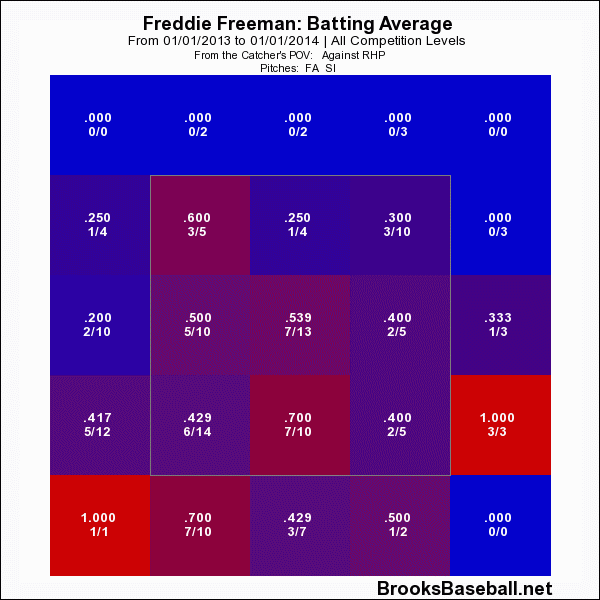 There aren’t many parts of the strike zone where right-handers can reliably blow fastballs by Freeman. Hitting the hard stuff has been one of his strengths throughout his big-league career, and, as illustrated by the chart above, he is doing it better than ever in 2013.

What can Wheeler do to turn his fortunes against his fellow 23-year-old? He hasn’t been particularly keen on throwing his changeup so far, in part because it’s his fourth-best pitch, but Freeman has shown a tendency to chase off-speed stuff off the outside corner from righties. Just not as far off the corner as Wheeler missed with it last month. He might also find success with the curveball, provided that he can spot it below the knees or close enough to the outer boundary to coax Freeman into flailing. In both cases, better command is paramount (7:10 p.m. ET).