Red Sox Director of Player Development Ben Crockett and Director of Pro Scouting Jared Porter played it coy when asked (repeatedly) about Xander Bogaerts at the Saber Seminar in Boston on Saturday. They acknowledged that he was close—not letting on quite how close—but noted that like any 20-year-old player, he still has weaknesses to work on (citing baserunning and defense, specifically). Either Bogaerts did a lot of developing on Sunday or he still suffers from the same flaws he did then, but he’ll have to work out any remaining kinks at the big-league level. As first reported by WEEI’s Alex Speier, Bogaerts will join the Sox in San Francisco tonight. Our take on Bogaerts from a scouting/fantasy perspective is here; this is about what his arrival means for Boston, and what it says about the prevalence of young players in the post-PED era.

The timing of the promotion is something of a surprise. When the trade deadline passed without a new third baseman in Boston, Bogaerts’ arrival seemed imminent (particularly since he’d just shifted to third at Triple-A). But the Sox called up Will Middlebrooks on August 10th instead, and Middlebrooks has hit .462/.548/.692 in his first eight games back in the big leagues. The walks are especially encouraging, in light of his hacking earlier in the year: he’s drawn four free passes in 31 post-promotion plate appearances, compared to nine in 216 PA prior to his demotion. Boston believed that Middlebrooks was the better choice 10 days ago, and he hasn’t done anything since to suggest otherwise.

So why are the Sox bringing up Bogaerts today? The only logical explanation is that they want him to play and think he can help, since they had other incentives not to make this move now. If they didn’t plan to play him regularly, they could have left him in Pawtucket to mature, since he probably hasn’t learned every lesson the minors have to teach after two months at Triple-A. Sometimes we see teams promote top prospects just to give them a taste of a pennant race, but if that were the Sox’ only motivation, they would have waited until September, when they could have called him up without affecting poor Pawtucket’s nail-biting pursuit of the Rochester Red Wings (and without removing someone else from the active roster). And if they’d resisted the urge to promote him for the rest of this season, added him to the 40-man this winter, and called him up a few weeks into 2014, they would have delayed his free agency by a year.

Of course, for a high-payroll team like Boston in a dogfight at the top of its division—our playoff odds report gives the Sox a 53.7 percent chance of winning the AL East—financial concerns several seasons down the road are secondary. If Bogaerts adds a win now, with Boston on the bubble, it will be worth whatever additional amount they’ll owe him later. The Sox have struggled lately against left-handed pitching, and Stephen Drew (.195/.248/.345), who’s never hit lefties well, is among the biggest black holes. The lineup scored six off CC Sabathia on Sunday night, and Drew was the only batter who didn’t get on base. Maybe that 0-for-3 was the final straw.

Bogaerts has hit .290/.407/.468 against southpaws this season, though he has a career reverse split. Despite his age, PECOTA projects him for a .268 TAv overall, which would be well above average by shortstop standards. Odds are he’ll spell Stephen Drew—who hasn’t had a game off since before Jose Iglesias was traded to Detroit—against lefties and make the occasional start at third against a right-hander.

We haven’t seen Bogaerts struggle, and we’ve heard the rave reviews from scouts, so it’s tempting to get too excited. It’s not unrealistic to expect that he’ll help, but his days as an impact player are probably at least one offseason ahead of him. The obvious comp is to Manny Machado, who was a year younger and had skipped Triple-A when he joined the Orioles last August, and held his own anyway. Bogaerts doesn’t provide the same value on defense, but his bat might be more polished than Machado’s was a year ago. The Sox hope he’ll hit more like Jacoby Ellsbury circa 2007. Bet on something in between, but much closer to the Machado side of the scale. It’s possible that David Ross, an elite defensive catcher, will end up being the bigger addition for the rest of this stretch run.

Bogaerts’ early arrival adds another name to the list of barely-20 big leaguers attracting a disproportionate amount of attention today. Between Mike Trout, Bryce Harper, Yasiel Puig, Jose Fernandez, Shelby Miller, and the rest of the 22-and-under superstar crowd, this feels like a historic time for ultra-young talent. And it is, though it’s not unprecedented. 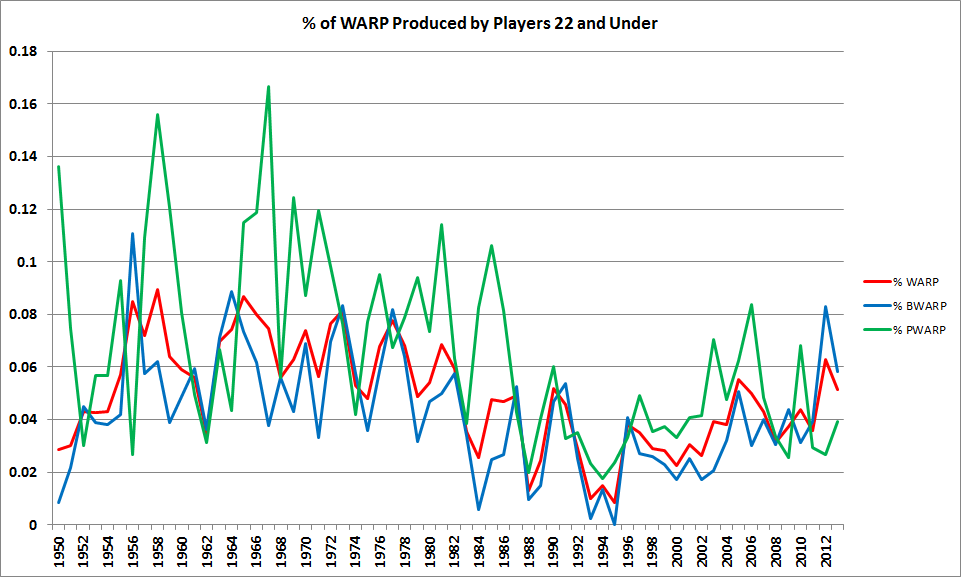 The first thing to notice is that the percent-of-PWARP line fluctuates wildly from year to year; as always, pitchers are unpredictable. The second thing to notice is the big dip in all three lines from roughly the late 1980s through the mid-2000s. You might know that period as the “Steroid Era,” though “Irregular Aging” era would be just as accurate. Earlier this year, Zachary Levine wrote about the abnormally high percentage of overall WARP produced by players 37 or older during those years; this is the other side of the same coin. When old players were producing enough to hold on to their roster spots longer than ever before, there were fewer spaces available for early 20-somethings. And when teams began to believe that players’ baseball lifespans had been extended, they might not have been in the same rush to promote young players and start their service clocks when they were still far away from their physical primes.

Whether or not there’s a direct cause-and-effect relationship between the institution of testing and the percentage of WARP produced by young players, the rate has been climbing since its post-'90s low point of 2002. Last season, it rose to 6.3 percent overall, and 8.3 percent for batters. Despite the success of Puig and Wil Myers, the rate has regressed somewhat in 2013; 12 of the 15 top WARP earners in this age range last season (Jason Heyward, Giancarlo Stanton, Brett Lawrie, Jose Altuve, Starlin Castro, Salvador Perez, Andrelton Simmons, etc.) were 22 in 2012, so they’ve graduated to the age-23-and-up group now. (Warning: arbitrary endpoint.) And as much as it seems that every young player finds his footing in the majors immediately, plenty of prospects have taken time to adjust or been sent down after struggling (Jurickson Profar, Aaron Hicks, the Royals, collectively).

Even last year’s post-PED high wasn’t an outlier, if you look back long enough. Here are the top five years since 1950 in 22-and-under BWARP percentage:

And here are the top 10 under-23 batters from each of those top-five seasons, in order of descending BWARP:

Also 22 or under and in the big leagues in 1956, in addition to Kaline-Robinson-Aaron-Aparicio-Clemente: Harmon Killebrew, Brooks Robinson, Bill Mazeroski, Don Drysdale, Sandy Koufax. Trout-Heyward-Harper-Stanton suddenly sounds a little less special.

Last year’s (and to a lesser extent, this year’s) collection of young talent looks unique, but part of that perception is our post-PED era perspective. We haven’t seen this sort of thing for a while, but it’s not really new—in fact, it might be more like normal than what we’ve become accustomed to. Fortunately, that doesn’t make it any less amazing in the moment.

I also noticed an overall dip in expansion years. That makes sense as expansion teams - especially of the '60s are behind in setting up their farms systems and drafting talent - while relying on cast-offs from other teams.
Reply to hotstatrat
Grasul
Really good work.
Reply to Grasul
TGT969
The 1956 extended list included 10 (!) HOF. Wow.
Reply to TGT969
Johnston
Great article!
Reply to Johnston
edman8585
How does this tie into bonus babies and the start of the draft in 1965.
Reply to edman8585