The Weekend Takeaway
During the 1998 home run chase between Mark McGwire and Sammy Sosa, there were 21 days on which both the Cardinals first baseman and the Cubs outfielder went yard. This year, with a little over three-fourths of the season in the books, Chris Davis and Miguel Cabrera have traded long balls on 14 days, four of them this month and 13 since May 29.

The most recent of those days was Sunday, when the Tigers hosted the Royals at Comerica Park and the Orioles finished off their series with the Rockies at Camden Yards. Cabrera got his yard work out of the way early at the expense of Bruce Chen, slugging his 40th bomb of the season on the first pitch he saw in the first inning. Davis waited until the eighth inning to crank big fly no. 45, doing so on the first offering he saw from Edgmer Escalona. Cabrera’s shot gave Max Scherzer a 2-0 lead that the right-hander rode to his 18th victory of the season, a 6-3 decision. Davis’s homer, his fourth hit of the day, produced two insurance runs for the Orioles in their 7-2 win.

One-hundred-and-twenty-five games into the 1998 campaign, McGwire had 54 homers to his name and Sosa owned 49. Like McGwire, Davis has a five-homer lead, though the Orioles, 124 games into their season, have one more left to play than the Tigers. Davis and Cabrera are nine behind McGwire and Sosa, respectively, at essentially the same point in the schedule. But while it’s unlikely that any records will be broken in this year’s chase, perhaps apart from Davis’s pursuit of Roger Maris, it boasts ample intrigue nonetheless.

Cabrera carries a convincing lead in the batting-title race, hitting .360 to runner-up Mike Trout’s .333. He trails Davis by five home runs, but is ahead of him by five RBI, 120 to 115. And if he at least keeps pace in the dinger department, he should sustain his RBI edge through the end of the season.

All of which means that Cabrera could be a home-run comeback away from capturing his second consecutive triple crown—and from becoming the first major leaguer ever to notch two in a row. Rogers Hornsby and Ted Williams each netted a pair, but neither did so in back-to-back seasons. Triple crowns were earned in 1933 (Chuck Klein and Jimmie Fox) and 1934 (Lou Gehrig), and again in 1966 (Frank Robinson) and 1967 (Carl Yastrzemski), but none of those players ever seized another, let alone did so the very next year.

In 1998, Sosa made his move on McGwire in June, smacking 20 homers to McGwire’s 10. Cabrera has not out-homered Davis by more than two in any single month (May, 12-10), but he has eight in August to Davis’ seven, and he missed the first three days while nursing a sore hip.

Cabrera told reporters, including MLB.com beat writer Jason Beck, that he is not dwelling on the race with Davis, that helping the Tigers win a second consecutive pennant means much more to him than passing Joe DiMaggio on the all-time list or taking home another triple crown. With Barry Bonds’ single-season record of 73 out of reach, the battle between Cabrera and Davis may be a footnote in the fight for the American League’s wild card berths, unlike the McGwire-Sosa duel that captivated the league. But if the past two weeks are any indication, it is likely to rage deep into September—with a good deal of history at stake.

Friday’s Matchup in Review
Jonathan Lucroy supplied the heroics in game one of three between the Reds and Brewers long after Milwaukee’s starter, Tom Gorzelanny, departed. But in his 4 2/3 innings of work, over which he was charged with five runs on six hits (two homers) and three walks, Gorzelanny did one thing he had not been able to do in the past: tame Jay Bruce.

The Reds’ right fielder entered with small-sample ownage on Gorzelanny—a 1.755 OPS built on three homers and five walks in 17 plate appearances, the best mark assembled by any left-handed hitter with at least 15 trips to the box against the southpaw. On Friday, Bruce drew a first-inning walk, but tapped a first-pitch fastball back to Gorzelanny in the third inning and was called out on strikes in the fifth.

Since Gorzelanny is essentially a two-pitch (fastball-slider) pitcher versus same-side hitters, sequencing is paramount when it comes to keeping lefties who see him well at bay. The fifth-inning punchout epitomized that:

Gorzelanny’s first pitch was a hanging slider—a mouthwatering mistake on which Bruce usually capitalizes—but he got away with it, as the lefty slugger merely fouled it off for strike one. Pitch two was a fastball away for a ball, but it set up the upstairs heater at which Bruce waved for strike two. Bruce fouled off the 1-2 offering, a fastball over the outer third, and then was frozen by a front-door slider that broke into the zone for strike three.

Bruce is now 5-for-14 lifetime versus Gorzelanny, a modest improvement to their history from the latter’s perspective, in spite of the first-inning base on balls. If Gorzelanny can concoct more sequences like that one, which helped to wash away some of the bitter taste from his earlier struggles, this matchup won’t look so lopsided for much longer.

Matchup of the Day
Jeff Samardzija and Ian Desmond have locked horns only 14 times in the majors, but in the eyes of the Cubs’ right-hander, that’s about 11 times too many. Desmond put down a sacrifice bunt in his first-ever meeting with Samardzija, and he struck out in his subsequent two. Since then, he is 8-for-11 with four extra-base hits and only one strikeout. And in his five most recent encounters, he is a perfect 5-for-5.

An aggressive hitter, Desmond has averaged about 3.57 pitches per plate appearances over the course of his career, though he has been more selective in 2013, seeing 3.71. If history is any guide, those numbers may tick down this evening, because Desmond has seen just 41 total pitches in his 14 plate appearances versus Samardzija, an average of 2.93 per trip. For comparison, the most aggressive hitter in the league this year is Rockies rookie Nolan Arenado, whose mean is 3.27. 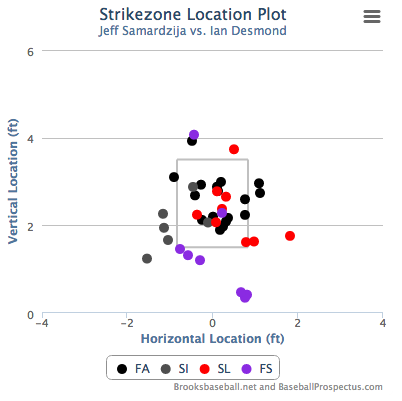 Of course, one reason why Desmond has swung so often in early counts with Samardzija on the mound is that Samardzija has given him a lot of desirable pitches at which to offer. The cluster near the heart of the zone would be worrisome enough on its own, but those sinkers and splitters down and in spell big trouble, too. 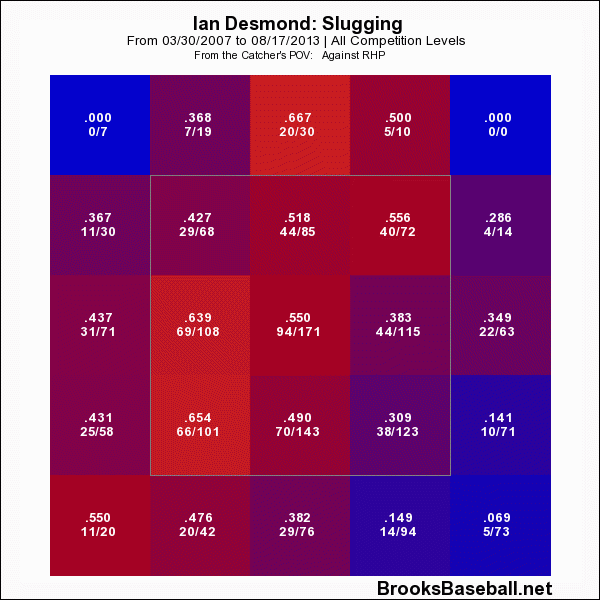 Comparing the location plot with the hot zones in Ian Desmond’s slugging-percentage map might lead you to believe that Samardzija is letting Desmond choose where the ball is being pitched. There are a whole lot of center-cut fastballs and sliders, some low-and-inside sinkers and splitters, and a paucity of the down-and-away breaking stuff to which Desmond is averse.

Unfortunately for the Cubs, Samardzija—after an excellent April and May—has been making mistakes regardless of the batter in the box. Since July 5, the 28-year-old has been blasted to the tune of a 6.65 ERA, the product of 55 hits (six homers) and 26 walks in 46 innings on the bump. Opponents have combined for a .297/.393/.476 triple-slash line against him over that eight-start rut, which essentially means that he has turned them all into the 2013 version of Robinson Cano (.299/.383/.486).

Samardzija will need to bring better command to the mound to turn the tables on Desmond and get his ERA trending in the right direction for the first time in four starts (8:05 p.m. ET).

You need to be logged in to comment. Login or Subscribe
TGisriel
Frank Robinson's triple crown was 1966, not 1968
Reply to TGisriel
bornyank1
Fixed.
Reply to bornyank1