There’s a mantra that echoes constantly throughout the halls of Raising Aces: timing is everything.

A pitcher’s ability to repeat his ideal delivery with the same timing and sequencing is the key to his effectiveness and the essential ingredient in the recipe for pitch command. Command goes beyond raw walk totals or strike frequencies. It also extends to a pitcher's ability to put the baseball on target, hitting the catcher's glove regardless of whether he sets up down the middle, on the edge of the zone, or outside the frame. This is a much more difficult task than it might seem at first glance, and the fact that the vast majority of major-league pitchers miss the majority of their targets underscores the challenge.

Offense would be greatly suppressed throughout baseball if all pitchers were able to locate precisely, such that batter weaknesses could be exploited while pitchers lived on the borders of the strike zone. In an average game, a surprising number of hits come as the result of misplaced pitches, particularly in the case of hits that go for extra bases. Batters will occasionally make hard contact on a well-placed offering, but more often the hardest-hit balls occur as a result of a pitch that missed the target and caught too much of the plate, a trend that is most glaring when we look at home runs.

A pitch that is elevated is at the greatest risk of leaving the yard, since it allows hitters to easily get under the ball to produce loft and back-spin. Further, pitchers who mistime their deliveries such that the arm comes through too late will be at risk for elevated pitches, as the inability to reach full extension at release point will produce an offering that misses high and to the arm-side of its intended destination. This issue is at the core of my personal distaste for the slide step, as the most common side effect of that tactic is a pitcher who does not have enough time to complete the rotational phases and find ideal extension, resulting in elevated deliveries.

To demonstrate this risk, I decided to study some real-world examples. I picked a day of the week and looked at all of the homers that were hit in that day's games, anchoring on the longest drives of the day in order to isolate those offerings that were truly mashed. It’s an experiment that’s worth repeating, given the caveats of small sample size, but my initial findings meshed extremely well with the original hypothesis that mistimed pitches function as the flux capacitor that make homers possible.

The following examples trace the longest home runs from August 14. A total of 23 homers were hit on Wednesday, and these five blasts traveled the farthest. Let's take a look.

Krol faced two batters in relief on Wednesday, the latter of which was Belt, who hit a towering blast off of a 2-2 four-seam fastball. It was the fifth consecutive heater of the at-bat, so Belt had no trouble lining up Krol's velocity, but the downfall of this pitch was its location. Catcher Kurt Suzuki had set up his target on the lower shelf of the strike zone, squatting behind the number nine if the strike zone were split into a 3×3 matrix (like a telephone keypad).

Krol badly missed his target due to late trunk rotation, sailing the ball above Suzuki's target such that it finished just above the strike zone, allowing Belt to get under it and send it over the wall. Krol's pitch was off the mark by more than two feet, and he left it in nearly the same spot as the previous fastball, leaving Krol vulnerable to the whims of Belt's bat-handling skills. Throwing two pitches at the same velocity and leaving them in the same location will play into the strengths of any hitter, and Belt capitalized on the combination of repetitive sequencing and pitch elevation (pitch plots represent the catcher's point of view).

Shelby Miller has enjoyed a tremendous rookie season, and he survives on what is mostly a two-pitch mix of fastballs and curves. When he encountered Pedro Alvarez in the second inning of Wednesday's game against Pittsburgh, Miller started the at-bat with a pair of fastballs that both missed their intended destinations. Both heaters were sorely under-rotated, with a late trigger that caused Miller to miss wide to the arm-side. 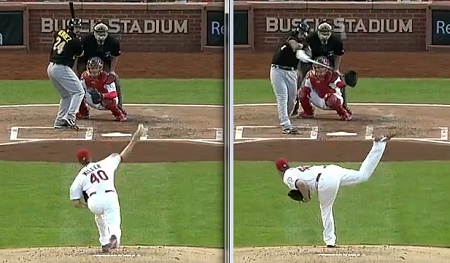 The pitch to Alvarez was also elevated, as a pitch that was intended to finish off the plate (inside no. 7 on the keypad) instead traveled up and away, catching the plate and dialing the number three. Alvarez took advantage of the elevated offering, sending it to the grassy knoll that lies behind the center-field wall for a 1-0 Pirates advantage.

We have seen three of the five longest home runs from Wednesday, and all three have come on pitches that were elevated above the intended target. Corbin had started off the at-bat with his trademark slider, which the left-hander is adept at keeping knee-level or lower. Corbin attempted to go knee-high again on his second-pitch changeup to Machado, with catcher Wil Nieves setting up right behind the number seven on the old keypad. However, a late arm resulted in a pitch that was above the belt, and right in Machado's wheelhouse.

Corbin was pitching from the stretch with the runner on first base, and though he avoided a stereotypical slide step, the southpaw did use a modified leg lift to reach foot strike more quickly. Corbin followed the typical pattern when utilizing a hastened delivery from the stretch, with the consequence that he hit foot strike before the upper body was prepared to trigger rotation, resulting in a pitch that missed above the target. The changeup is the least effective of Corbin's offerings, and he can ill afford to miss so badly when he brings el cambio to the table.

We finally encounter a homer that was hit off a pitch that was thrown low in the strike zone. Esmil Rogers dropped a breaking ball on the lower edge of the zone, and David Ortiz dropped the hammer on the pitch. Rogers was able to paint the no. 8 target that was established by catcher J.P Arencibia, and in fact Arencibia's glove movement suggests that the pitch was destined to fly toward the dirt had Ortiz not connected.

It’s tough to blame Rogers for this outcome, given that his process was well-executed. He avoided the middle of the plate versus a dangerous hitter, put the ball where his catcher had asked for it, and then watched in horror as Ortiz extended his arms on a pitch that was breaking down and away from his lumber. Sometimes great hitting beats good pitching.

The rocket that Ian Desmond launched off of Tim Lincecum traveled almost 450 feet, which was easily the longest homer of the day. The blast also came on perhaps the most elevated of the pitches under examination, missing the target that Buster Posey had established by a number of feet. The pitch was clearly off the mark immediately after it left Lincecum's hand, and the final destination may have been the backstop had it not been an off-speed pitch that was breaking back toward the earth.

Lincecum had previously thrown four consecutive fastballs to Desmond, not one of which was able to find the lower half of the strike zone. Timmy's timing has been hit-or-miss all season, and Wednesday's game was one of his misses, in which he allowed six earned runs over seven innings (this following eight innings of one-hit shutout ball in his previous start). The pitch to Desmond was an exaggerated example of what can happen when Lincecum is unable to bury his split-change. When he is on, Lincecum can coax empty swings with the best of them by getting batters to swing over his late-biting split, but the fact that the downward-breaking pitch finished above the strike zone is a powerful indictment of Lincecum's inability to line up the delivery in this contest.

Four of the five longest homers from Wednesday were the result of pitches that missed badly above the mark, giving hitters an opportunity to lift the ball out of the yard. The results of this miniature study support several years’ worth of anecdotal evidence, but since just about anything can happen in a sample of five pitches from a single day, it will be worthwhile to revisit the experiment again in the future. Our goal is to better understand the relationship between the process of pitch execution and the outcome of batted balls, and we are just scratching the surface of the possibilities when a pitcher's timing is off-track.

You need to be logged in to comment. Login or Subscribe
nolansdad
That Ortiz homer is just a thing of beauty. Amazing how much better he has become over the years.
Reply to nolansdad