The Wednesday Takeaway
The Yankees acquired Alfonso Soriano from the Cubs on July 26, hoping that he could prod a dormant lineup into action. That did not happen right away. In the first 15 games of his second stay in the Bronx, Soriano batted just .193/.220/.368; he smacked three homers in 59 plate appearances, but also struck out 19 times and walked just twice.

Then the Angels came to town.

Soriano and the Angels are well acquainted. When they came to Chicago on July 9, Soriano, then the Cubs’ cleanup hitter, greeted them with a couple of home runs. If he had stayed with the Cubs, the Halos would have been delighted to steer clear of his bat for the rest of the year. Alas, the Yankees came calling, offered up a pitching prospect and some salary relief, and put the Angels on a collision course with Soriano a month and four days after he pummeled Joe Blanton and Michael Kohn.

In the words of manager Mike Scioscia, two games into the three-game series at Yankee Stadium, Soriano “has had a pretty good month” at the Angels’ expense.

On Tuesday, Soriano did something he had never done: he collected six RBI in one contest, a laugher in which the Yankees scored two touchdowns to the Angels’ one. Five of those RBI came on a pair of long balls, a two-run shot off of Jason Vargas in the fifth and a three-run blast off of Blanton in the seventh. Sandwiched between those dingers was a run-scoring single against Kohn in the sixth. Soriano’s middle-inning onslaught helped the Yankees compile an 11-run lead, rendering the four runs the Angels tallied in the top of the ninth meaningless.

On Wednesday, Soriano one-upped himself: he drove in a career-high seven runs in one contest, a laugher in which the Yankees did most of their damage early instead of late. The home team dropped a four-spot on Jered Weaver in each of the first two innings, and Soriano was responsible for six of those eight tallies.

For two batters, all was well in Weaver’s world—Brett Gardner and Ichiro Suzuki both flied out to left field. Then Robinson Cano singled and Alex Rodriguez doubled. Perhaps mindful of the history between him and Granderson (the center fielder was 9-for-25 versus Weaver coming into the game), Weaver issued him a five-pitch base on balls, bringing Soriano to the plate with the bases loaded and two down.

The 0-1 pitch was a fastball that caught too much of the plate, and after Soriano was through with it, the 88-mph offering could have used one of the luggage tags given away at Yankee Stadium on Wednesday night.

As if that weren’t enough, Soriano got another try with three ducks on the pond and two away in the second inning. He also got another ill-placed fastball. This time, mercifully for Weaver, the result was merely a two-run double into the left-field corner.

The good news for Weaver kept on coming: the next time Soriano stepped to the plate, the bases were empty. Weaver was not done feeding him fat fastballs. And Soriano was not done affixing luggage tags to them:

That bomb to left resulted in Soriano’s personal-best seventh RBI. He had already joined Rusty Greer and Geoff Jenkins as the only players to drive in six or more runs in consecutive games since 1920. But neither Greer nor Jenkins picked up a seventh RBI on either of their two big nights. In that department, Soriano stands alone.

He has Weaver’s poor fastball command to thank. The Yankees, collectively, went 5-for-10 when they put Weaver’s four-seamer or sinker into play, and four of those hits went for extra bases. In the area of teeing off against Weaver, Soriano was just one big man in a small crowd.

Still, about three weeks after putting on the pinstripes again, Soriano is finally providing the long-awaited jolt. The Yankees have won four straight for the first time in more than a month, and their marquee deadline acquisition is leading the charge. Mired in fourth place in the American League East and five games behind the Athletics in the race for the second wild card spot, they’ll need that charge to continue for the next month and a half to have any hope of making the playoffs.

Wednesday’s Matchup in Review
Weaver lasted only five innings, but because the Yankees tattooed him for nine hits and three walks, Curtis Granderson, batting fifth in the order, still had the pleasure of facing him three times. The Yankees’ center fielder went 1-for-2 with a walk, a single, and a strikeout, improving his career line to 10-for-26.

Granderson’s base on balls in the first inning followed hits by Cano and Rodriguez, loading the bags for Soriano , who cleared them two pitches later. As I suggested might be the case based on their head-to-head track record, the first pitch that Weaver threw to Granderson was a curveball. Unfortunately, it—like two other pitches in the plate appearance—wound up in the dirt, as Weaver momentarily lost his target or opted to issue Granderson an unintentional intentional walk.

The right-hander was generally around the zone, earning strikes with 52 of his 76 deliveries, though quality strikes were few and far between. The changeup with which he fanned Granderson in the fourth inning was one of them:

Over the course of his career, Granderson has shown a tendency to flail at right-handers’ off-speed offerings over the outer third, whiffing on more than one-fifth of the pitches placed in the area where Weaver went with the 1-2 count. Weaver settled in to post two zeroes after permitting four runs in each of the first two frames, and the punchout of Granderson was a prime example of his improved command in the middle innings. The fastball on which Soriano went yard leading off the fifth, on the other hand, was not.

Matchup of the Day
Of the 30 pitchers whom Andrew McCutchen has faced at least 20 times in the majors, only two (Bronson Arroyo and Travis Wood) have held him to a lower OPS than Lance Lynn. The Pirates’ center fielder is 4-for-20 lifetime versus Lynn with a couple of doubles and seven strikeouts. The Cardinals’ right-hander is the only pitcher who has struck out McCutchen seven times without walking him; only Dillon Gee, who has done it five times, is close. 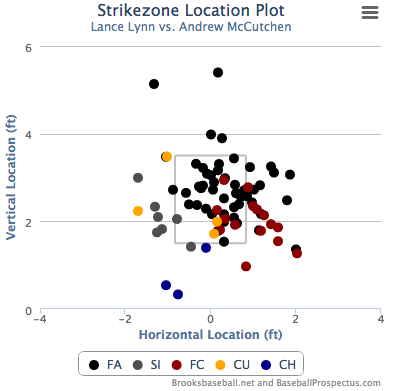 Lynn has historically used his curveball about one-sixth of the time to like-handed batters, though that rate has decreased to about nine percent this year. Against McCutchen, he has thrown only four of them in 79 offerings, or a tick above four percent. Three of those four came back-to-back-to-back in one at-bat, on April 20, 2012. Meanwhile, Lynn almost never employs his changeup when facing a righty, but three of the 13 he has tried were to McCutchen—back-to-back-to-back in one at-bat on August 18, 2012. 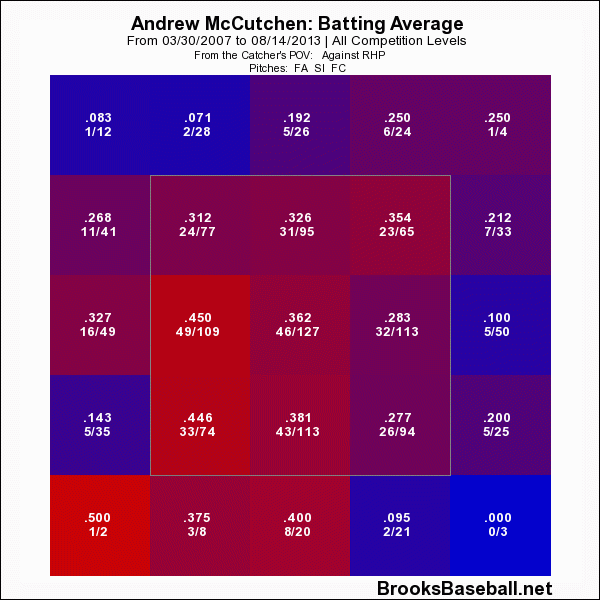 The hard-stuff-heavy approach against McCutchen is an interesting one—driven, in this case, by Lynn’s use of a cutter instead of a slider, the preferred secondary pitch for most right-handers when McCutchen is in the box. McCutchen is most dangerous on pitches low and inside, an area of the zone from which Lynn has almost entirely stayed away, as you can see on the location plot above. When the Ole Miss product most recently strayed from that plan, McCutchen lined a double, his only hit in three head-to-head at-bats on July 30, 2013.

Considering how well Lynn’s strategy has worked to date, it would be foolhardy for him to change it until McCutchen demonstrates the ability to adjust. Expect more of the same—fastballs, sinkers, and cutters, anywhere but knee-high over the inner third—when the two tangle in the series finale. But with the element of surprise back in Lynn’s favor, now that 13-plus months have elapsed since he last used a breaking or off-speed pitch in this matchup, don’t be surprised if he throws McCutchen a curveball, literally and figuratively, this afternoon (1:45 p.m. ET).