The Monday Takeaways
Last week, in his major-league debut, Andrew Albers blanked the Royals for 8 1/3 innings. Given his story and the fact that he was setting foot on a big-league field for the first time at the age of 27, that seemed like a big deal. Six days later, Albers one-upped himself.

The left-hander was unable to complete the shutout on August 6, failing to bump Andy Van Hekken down a line on the list of pitchers who have done it in their first tastes of The Show. Instead, he did in his first start at Target Field, two-hitting the Indians and outgunning Danny Salazar in a 3-0 Twins victory on Monday night.

Albers retired the first 11 Indians he faced in order before coughing up a single to Jason Kipnis in the top of the fourth. Asdrubal Cabrera lined out to end that frame, and the Tribe did not earn another baserunner until Yan Gomes singled in the top of the eighth. Michael Brantley lined out, Mike Aviles fouled out, and that was that. Not only did the Indians fail to score, they never even advanced a runner into scoring position, as Albers faced two over the minimum in his 102-pitch gem.

As Yahoo! Sports’ Jeff Passan pointed out on Twitter, Albers became the first pitcher to toss 8 1/3 or more zero-run frames in each of his first two starts since Tom Phoebus did it for the Orioles in 1966. After making a bit of Twins history in his first start, he made some more in his second, shattering the longest scoreless streak to begin a career by a Minnesota starter, which was previously held by Anthony Swarzak.

Unless Albers adds a few ticks to his 87-mph fastball or learns how to spin an electric breaking ball, the magic will soon wear off. He has fanned only four batters through his 17 1/3 run-less innings, and the FIP overlords won’t allow that to go on forever. But Albers, on top of his tale of perseverance, is delivering proof that you can go a long way by throwing strikes and changing speeds—if your defense “fill[s] up SportsCenter’s Web Gems” behind you.

The Diamondbacks got Adam Eaton back from the disabled list on July 9, after the outfielder spent three-and-a-half months nursing a sprained ulnar collateral ligament in his left elbow, but they did not get much from him during his first month in the lineup. Eaton collected only three extra-base hits and batted only .236 in his first 22 big-league games of the year, struggling to live up to the hype that he generated by posting a .382 on-base percentage in 22 games last September.

On Monday, Kirk Gibson’s club needed a win to keep pace with Don Mattingly’s bunch, which won’t stop winning and now enjoys a 7 ½-game lead in the National League West, and its fellow wild-card contenders, which were six games up by the time the ninth inning of yesterday’s contest began. Arizona’s hopes of reaching the postseason were fading quickly, and with Cody Ross expected to miss the rest of the season because of a dislocated and fractured hip, the D-backs needed an outfielder to step up in his place.

Eaton stepped up with game one of three against the Orioles tied 6-6 in the bottom of the ninth. It had been a seesaw battle to that point:

Darren O’Day, who had surrendered only one home run in 29 1/3 innings away from Camden Yards this year, threw only one pitch and surrendered his second.

Eaton found the backdoor slider—which caught too much of the outer half—to his liking and slugged it into the pool beyond the right-center field wall. After dropping a weekend series to the Mets and losing ground on the Dodgers, who have won 38 of their last 46, the Diamondbacks can only hope that there’s more where that came from.

Monday’s Matchup in Review
Astros manager Bo Porter elected to hold Jose Altuve out of the lineup for Monday’s opener, in which Yu Darvish struck out 15 over 8 1/3 innings of one-hit, one-run ball. Since soreness in Altuve’s left quad left us with no new data in this matchup, let’s instead take a look at the at-bat that left the lone blemish on the right-hander’s line.

In the eyes of backup catcher Geovany Soto, who entered the game when A.J. Pierzynski was ejected for arguing balls and strikes following a walk in the bottom of the sixth, Darvish did nothing wrong. He hit the glove with a backdoor cutter that virtually painted the outside corner.

But Darvish might have retired Corporan with his no-hitter intact had he placed the cutter knee-high, instead of a few inches up. 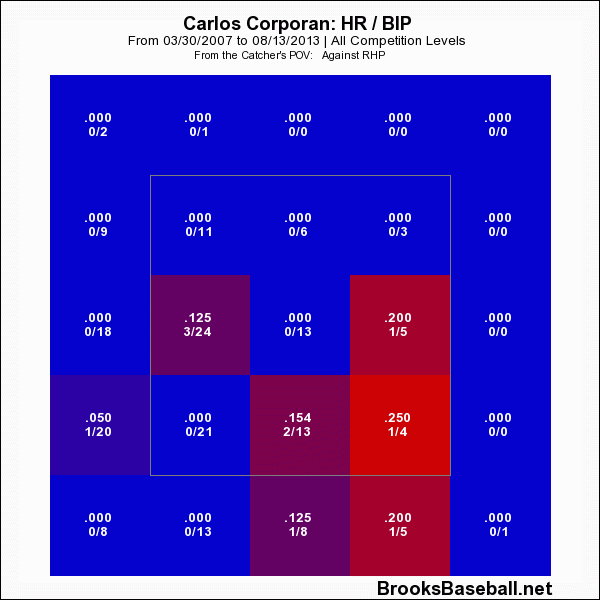 Instead, he found the part of the zone where Corporan has struck three of his 10 career homers versus right-handed pitchers—which also happens to be Corporan’s hottest spot by batting average. And even though the switch-hitting catcher has slumped mightily after an excellent first two months, his bat came alive in time to end Darvish’s second no-hit bid against the Astros this season.

Matchup of the Day
The most formidable obstacle standing between Hyun-jin Ryu and his 12th win of the season might be Matt Harvey, who is scheduled to toe the rubber against the Korean import, and who has prevented three of his last four opponents from plating a single earned run. But when it comes to things that Ryu himself can control, one of the most challenging tasks may be retiring Marlon Byrd, who is enjoying a renaissance at the age of 35.

Byrd has shelled left-handers to the tune of a .314/.360/.554 triple-slash line this year, and he went 1-for-3 with a double versus Ryu when the Dodgers visited Citi Field in late April. There is reason to believe, though, that the Incheon native can gain the upper hand in the rematch this evening.

In addition to compiling a dominant 1.83 ERA in 10 starts at Chavez Ravine, Ryu has posted a rather severe reverse split in his first stateside campaign. Lefties have hit .271/.333/.429 off the 26-year-old; righties, meanwhile, are batting just .245/.295/.342. That comes out to a .637 OPS, the fifth-best effort among all qualifying southpaw starters against righty swingers. Only Clayton Kershaw, Madison Bumgarner, Patrick Corbin, and Jeff Locke have clamped down harder on their glove-side foes.

Ryu owes much of that success to his changeup, an offering that Jason Parks described as a “big-money pitch” with plus-plus potential in his pre-season scouting report on the left-hander, which was published along with the Dodgers’ top prospect list.

Righties are hitting below the Mendoza line when they put the changeup in play, and all but two of the 21 hits that they have notched off of it have been singles. 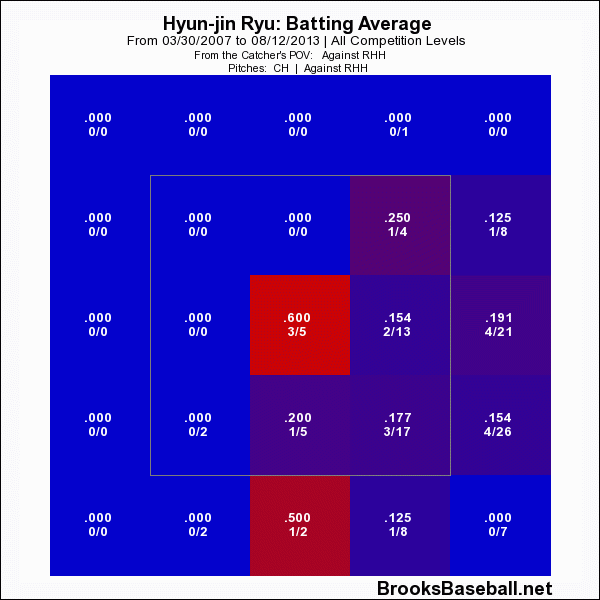 If the changeup does not come in right down Main Street, righties are either whiffing or pounding it into the ground, which explains why Ryu is tied with Paul Maholm for the league lead with 16 twin killings induced from right-handed hitters. That, by the way, is among all pitchers, not just lefties.

Byrd saw two changeups, both on the outside corner, in his first meeting with Ryu, flying out on the first and taking the second for a first-pitch strike. You can count the veteran outfielder among Ryu’s double-play victims, but he actually made those two outs on a center-cut fastball, another pitch with which the lefty has coaxed a high volume of worm killers. His double came on the third pitch of the at-bat that began with the outside-corner changeup, a poorly located curveball that he lined down the left-field line.

A bargain-bin offseason pickup for $700,000, Byrd has easily exceeded his price tag by supplying 17 home runs and 2.2 WARP, and he has retained his penchant for punishing fastballs in the low-and-in part of the zone. That skill dates at least to 2007, as far back as the data in the Brooks Baseball zone profiles goes, and Byrd is no slouch when it comes to capitalizing on changeup mistakes, too.

But if Ryu can locate his two primary offerings well, it may not matter. Expect him to change speeds and continue to pitch Byrd outside with the changeup, particularly if the outfielder works his way into deeper counts than he did in April. Ryu also has not yet shown Byrd his slider, a pitch that he has used about nine percent of the time versus righties in 2013, and he might benefit from the element of surprise (10:10 p.m. ET).

That's 9 starts, 9 complete games, 5 shutouts. I had forgotten about how incredible and special that 1981 season was.
Reply to redsoxin2004